Did the tequila brand really fuel the legendary 1972 tour? And why does everyone look so clean?

Yesterday, Jose Cuervo debuted a lavish new commercial, courtesy of McCann New York, that celebrates the tequila brand’s role in "fueling" the Rolling Stones 1972 American tour, one of the most debauched rock-and-roll campaigns of all time.

Great. Except it has some problems.

The 1972 tour kicked off with a private party at The Trident in San Francisco, during which "a bartender grabbed some Cuervo and created the band’s first tequila sunrise, which quickly became their favorite drink and official cocktail of the tour, later dubbed ‘The Tequila Sunrise Tour,’’ according to a release from McCann.

Historically speaking, this raises some questions. As do several other things about this otherwise nice-looking ad, which is supposed to take place on the band's '72 airplane, the Lapping Tongue.

1. The music. Even a casual Rolling Stones fan will tell you that the song used here, "Miss You," was released in 1978 — five years after the ad is supposed to take place.

A spokeswoman from McCann explained: "The spot is inspired by the Stones in the '70s, and with so much passion around this legendary band, song choice would naturally spark debate. As we developed the creative, we found that this iconic song best captures the spirit of that era."

Another reason to use "Miss You" – and we’re just speculating here – could be that the band doesn't license songs from the album it was actually supporting in 1972, "Exile on Main Street," for commercial use. (At least we can’t think of any examples. Correct us if we’re wrong.) "Miss You," meanwhile, has already been used to advertise liquor before, specifically in this 2011 Grey Goose spot. Either way, the music doesn’t fit the era represented, which is immediately a huge bummer.

A couple of McCann worker bees told Campaign US that they raised the issue during production but were quickly overruled. (They spoke on condition of anonymity, for obvious reasons.)

2. There’s no "Cocaine." No, we don’t expect Cuervo to show passengers on the plane snorting blow. (Though do they all have to look so freshly showered? Does this plane have laundry service?) We’re talking about the tour’s nickname, which was decidedly not The Tequila Sunrise Tour, as the press release claims.

From Keith Richard’s autobiography, Life: "The ’72 tour was known by other names – the Cocaine and Tequila Sunrise tour, or the STP, Stones Touring Party." No one expects total truth from an ad agency, but obvious lies — even of omission — should still be avoided.

3. That is not Truman Capote. One minute in, we see a shot of a young reporter talking into a tape recorder. Truman Capote famously accompanied the Stones on much of the 1972 tour, but never actually published anything about it. According to the McCann spokeswoman, the actor isn’t specifically meant to represent Capote. "We loved the way the Stones were always at the center of an interesting cast of characters," she said. "These characters were inspired by, rather than based on, specific people." Fair enough, but finding an actor who did resemble Capote would have added to the authenticity of an ad that claims historical roots.

4. The "guru" character. To be sure, Indian music and philosophy had a big impact on the Rolling Stones and Beatles in the '60s (though Richards is on record as having "grown sick to death of the whole Maharishi guru shit" by the 1970s). But the inclusion of a stock Hindi character at :48 feels a little too much like lazy shorthand for "wacky hippie party."

5. Fly the smoke-free skies. There are rules against showing people smoking cigarettes in commercials. We get that. But you can’t make an ad about any plane in 1972, much less one transporting the Rolling Stones, in which the air looks clearer than a Rocky Mountain sky. Even Instagram offers filters that could have helped here. As is, the cheery, "Austin Powers" vibe on this plane is just way too PG for the derelict reality Cuervo is trying to co-opt.

6. The Cuervo bottle. Here is what Cuervo looked like in 1972. Pretty bad-ass, right? 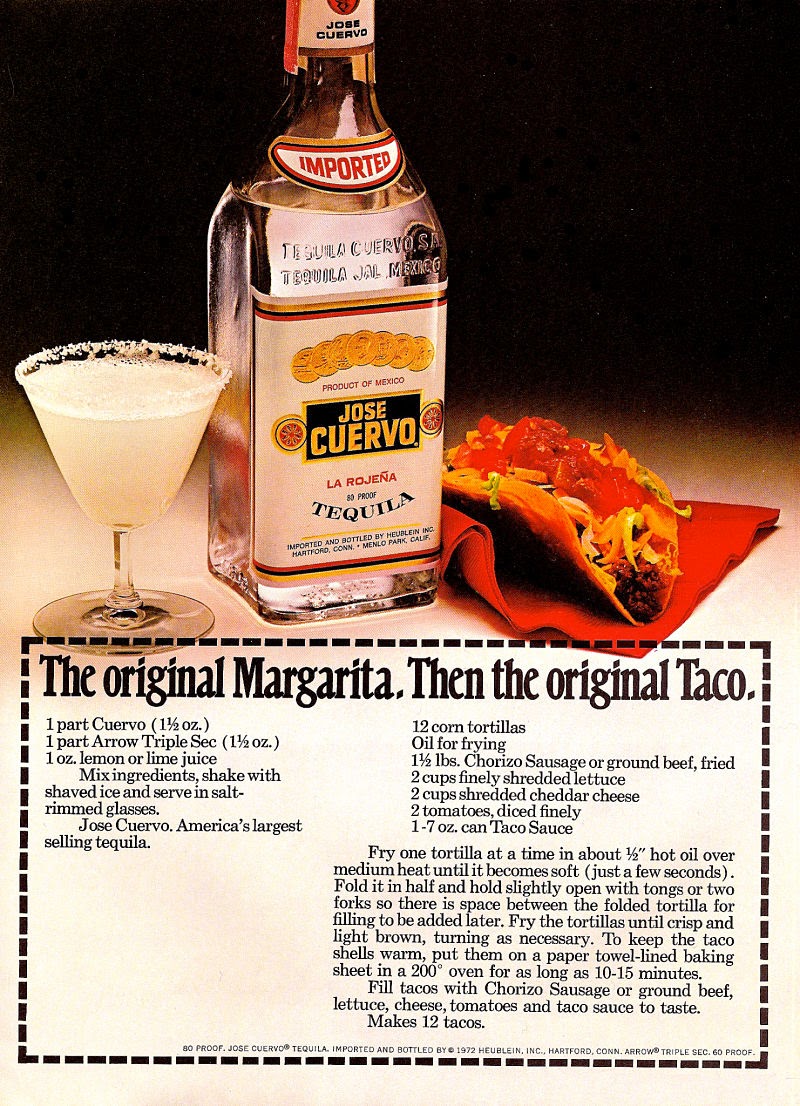 Compare that to the shot of the bottle on the plane. McCann said it took "artistic license" here, presumably to avoid confusing consumers who actually want to find the product in a store — even though the label hasn't changed that much. But what we are left with is not just another anachronism that takes us out of the moment; it’s a missed opportunity to showcase the brand’s deep cultural roots — the very thing this ad is supposedly all about. Which would have been good, because another problem here is…

7. Cuervo’s role in the 1972 tour. Longtime Stones fans will recognize the story about Jagger being served his first Tequila Sunrise at the Trident in 1972. What’s new is the idea that Cuervo was the tequila used in that drink, or that it "fueled" the tour, as the tag line states. There’s no mention of the brand in the version of the story Richards tells in Life, and even the bartender who poured the fateful drink, Bobby Lozoff, made no mention of Cuervo when National Geographic interviewed him about it.

So where does the idea come from? "There is no exact source," said the McCann spokeswoman, "but there was no other tequila around at the time." As evidence, she supplied a 1972 newspaper article in which Jagger is said to be drinking Cuervo backstage at a show: 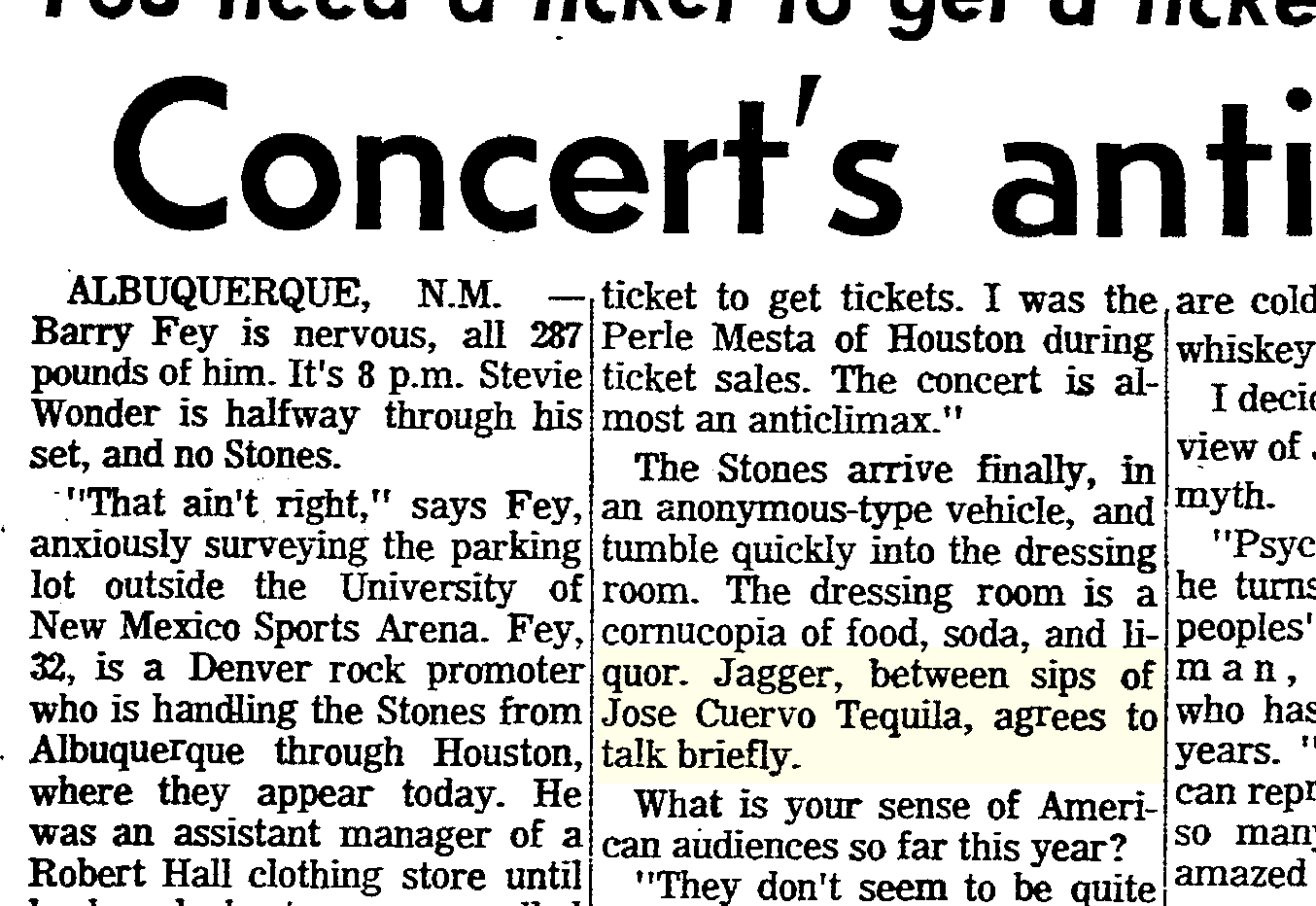 But the idea that Cuervo was the only tequila around in 1972 doesn’t quite hold up. According to a January 1976 Time article, annual tequila imports to the US increased more than 400% between 1970 and 1975. And in 1972, the Trident was the largest outlet for tequila in the United States. It seems unlikely such a bar would have had only one brand of the stuff on hand.

Cuervo’s real claim to historical relevance here seems to be that in 1973, it was the first tequila brand smart enough to capitalize on the tequila sunrise trend by putting the recipe in print ads and on the back of bottles. The company even asked the manager of the Trident for the recipe.

But the idea that Cuervo "fueled" the Stones' 1972 tour feels a bit like reaching — or is at least not well supported. Homage is one thing; playing fast and loose with rock-and-roll history (particularly at a time when consumers value authenticity from their brands) is another.

None of which takes away from the fact this is a fun, nicely shot ad with some great music and solid costume design. But if it left you thirsty for some real footage of the 1972 tour, mix yourself a Tequila Sunrise and click below.