Uefa hosted a four-day football festival this month next to the Queen Elizabeth Olympic Park in Stratford.

A free family-friendly event, celebrating the Uefa women’s and men’s Champions League finals, hosted at the International Quarter in Stratford between 23 and 26 May.

A number of interactive games and activities themed around football were located throughout the park, including a large area dedicated for the Discover Ford experience, implemented by Imagination. This incorporated a skate park, a test track in which the company’s newest car models – the Ford Kuga and Ford Fiesta ST – were showcased, as well as a dedicated indoor section containing a car simulator.

A HTC special penalty challenge competition invited visitors to take part and win a selection of prizes, including phones and Uefa Super Cup tickets. Action shots were captured with the new HTC One and uploaded to social media channels.

UniCredit tested the skills of football enthusiasts with its Robokeeper, iniviting people to take part in a real-life penalty shootout. Gazprom offered attendees the opportunity to be interviewed by a professional television presenter, in addition to giving visitors the chance to test their reaction speeds at its Reaction Wall.

Guests were able to have photos taken with the Uefa Champions League and Uefa Women's Champions League trophies, as well as visit a dedicated museum featuring memorabilia, video footage and football kit from past tournaments.

Young football enthusiasts were also able to participate in skills clinics and coaching sessions, as well as watching dedicated competitions for futsal and football skills.

Hollywood actor Will Smith, and his son, Jaden, stunned crowds with a special appearance on Saturday (25 May), making their way to a scaled-down football pitch. The pair posed for photos with football legends such as Liverpool player Jamie Carragher and former Chelsea member Gianfranco Zola, and went on to show off their football skills in a penalty shootout.

Both Carragher and Zola, as well as a number of iconic football players from over the years, kept the crowds entertained with a special one-off football match. 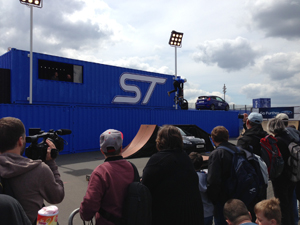 Events in Action: The London Evening Standard and Nook's Get Reading Festival