On 15 May at London hotel Riverbank Park Plaza, between 450 and 500 guests attended the PFA World Cup Preview event, a high-profile corporate evening to celebrate the 2014 Brazil World Cup. The aim of the event was to bring together business people from across the UK, sportsmen and women and celebrity figures, as well as provide a platform to support the association’s charity partner Marie Curie Cancer Care.

The RLD events team managed the end-to-end organisation and delivery of the event, responsible for the supervision of all table sales, liaising directly with the venue, managing third-party relationships with suppliers and entertainment as well as co-ordinating all logistics for the evening.

Attendees were invited to enjoy a pre-dinner drinks reception, a three-course meal and Brazilian-themed entertainment, and Martin Toal, deemed England’s number-one tenor, was also on hand to entertain guests. The event was hosted by former England captain Alan Shearer and Mark Clemmit 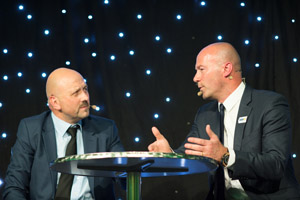 An auction, presented by sports radio presenter Jonny Gould, featured a selection of prizes including a VIP trip to Vegas, one-of-a-kind art pieces painted live on the night, a London weekend break for two, a framed signed Arsenal shirt and a Legend’s of football five-a-side tournament. At the end of the evening the attendees helped to raise over £54,000 for the charity.

How did you bring the Brazil theme to life?

On arrival, guests had pre-dinner drinks and canapés and afterwards they were led to the main event room by Brazilian drummers, who created a real carnival atmosphere. They also did a performance for between three and five minutes, and there was also a group of Brazilian dancers. We used a yellow and blue colour scheme to provide a vibrant backdrop to the event.

How long did it take to organise the event?

We started looking at venues back in September 2013, as we had a lot of things to think about and different elements to organise. This included responsibility for selling tables to companies, including banks, law firms and media agencies. We managed to secure the venue in January this year and two main project managers, alongside a team of up to ten people, worked on the overall organisation of the event. 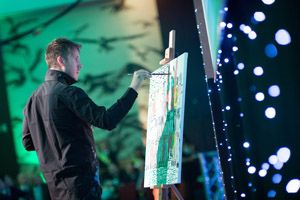 Why did you choose the Riverbank Park Plaza hotel to host the event?

Predominantly it had the perfect capacity, but also its various event spaces worked well for the event. This included the Thames Suite, which we used for pre-dinner drinks. I have worked with the venue before and have a good relationship with them. For the event they exceeded all my expectations.

What were your main highlights from the event?

The feedback we had from guests was fantastic. Many said they had not attended a corporate charity event like this before because of the different elements to the night. The Alan Shearer Q&A was very popular and gave people the chance to ask direct questions to him in the run up to the tournament.