Agencies Jack Morton Worldwide and Wasserman worked collaboratively with Vodafone and the Mayor of London to produce the end of year fireworks display in the capital, which for the first time featured a multi-sensory experience.

On Tuesday 31 December, more than 200,000 spectators lined the banks of the River Thames to watch the new year's eve fireworks display in London, produced by agency Jack Morton. Wasserman, Vodafone’s global experiential agency, worked with Bompas & Parr on the multi-sensory experience, as part of the Vodafone's Firsts campaign, involving fruity smells and tastes choreographed to the fireworks.

The usual flurry of NYE spectators were in good spirits as they started to gather between Westminster Bridge and Hungerford Bridge on new year's eve, from as early as 11.30am . The crowds were unaware of what to expect when handed their Vodafone/Bompas & Parr multi-sensory packs.

The kit consisted of scratch and sniff programmes, LED wristbands and seven kinds of fruit-flavoured sweets that linked to the tastes and smells of the multi-sensory display.

As the show begun, different coloured fireworks filled the sky and matched fruity flavours dispersed into the air. Revellers were immersed in clouds of apple, cherry and strawberry mist, before flakes of peach snow landed on their tongues.

The air filled with ‘floating oranges’ – thousands of enormous bubbles filled with Seville orange-flavoured smoke, as well as 40,000g of edible banana confetti.

While the event felt short but sweet (pun intended), the 11-minute long affair certainly added another dimension to the new year's celebrations. 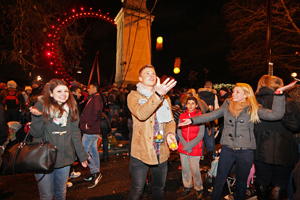 What was the biggest challenge?

The location is always challenging, especially with a large audience stood within such open surroundings, and not really knowing what the weather forecast will be until closer to the time. We measure gusts and windspeed to ensure when the fireworks are set off all attendees are safe. This is all part of our normal planning.

The event is designed predominantly for a TV audience outside of London, so based on creativity it is exactly what we wanted to achieve. In total, approximately 13.7 million people watched the fireworks – one of the largest viewed TV programmes of the year, and the most watched over the Christmas period. We are pleased the multi-sensory element worked well. How our team worked with the city teams all ran smoothly as well.

How do you review your crowd control procedures?

Over the last ten years since we have been doing this event, each year we are the victim of our own success as more people want to come along. We looked back at last year’s plan and found areas of high density crowds need a different approach when it comes to control, ensuring it is safer and smoother for people to move through. We also looked at how people queue at major stations and the various walking routes, so there were lots of tweeks to crowd control for the 2013 event.

How did you execute the multi-sensory experience?

This has never been done before so we added new team members to try to understand what would work well early on. A lot of testing was conducted beforehand, and for the rehearsal night we looked at the way the smells and other elements were dispersed throughout the air so that guests could get the true experience and not miss out. 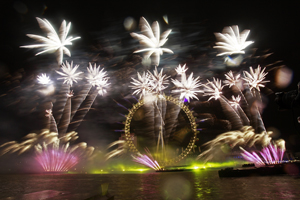 On the spot: Martin Green, head of brand engagement, Vodafone

What was involved in planning the multi-sensory experience?

Sam Bompas and Harry Parr told us about the fruity smells and tastes they wanted to achieve for the event. They worked with a fruit seller from Covent Garden, as well as a taste technician to replicate them. When you’re dealing with the public – especially with around 75% being tourists – you have to be conscious of safety, so everything was hypoallergenic, kosher and halal to ensure everybody could enjoy the experience. The challenge and excitement is always starting from scratch and creating something on this scale, but we were fortunate to have a good team behind us.

What was the biggest challenge?

It was a large-scale event involving a quarter of a million people on the night, so safety is always paramount. It was a fun challenge and what made it interesting was the augmented reality aspects for people at home – it added another dimension to the event.

How successful was it?

The campaign was designed to reach both a live and social media audience. Around 9.7 million tweets talked about the event, and we invited bloggers down who in total reached 7.7 million online readers. At the start of the Vodafone Firsts campaign, we wanted to ensure it would work in a digital sphere.

What's next for the Vodafone Firsts campaign?

It is early days but we have launched the programme in 21 countries and will be executing a series of projects and events around the world.

Global: Cosmo and Covergirl to activate at Times Square NYE

In pictures: Mayor of London's feast of St George celebrations