Heineken was after an experience to round off the summer and enlisted the help of agency RPM to create a one-off event at London's Battersea Power Station for more than 1,000 people.

After the launch of its Open Your City campaign, which included the Star Cabs activation and a sponsorship of Everyman Cinema’s outdoor film events, The Power of Summer, the drinks brand wanted to go out on a high. Agency RPM worked with Heineken on the brief to create a one-off live music event targeting 25-35 year-old tribal drinkers in London.

Event made its way to the entrance of Battersea Power Station on Chelsea Embankment along with 1,500 other guests. Brand ambassadors distributed free bottles of Heineken and draught was available at a bar as well as cocktails and other drinks.

Vendors from London’s Street Feast market dished up a variety of food throughout the night, including mac ‘n’ cheese available from Anna Mae’s, hotdogs from Dogtown and Indian-style tapas from Pao Wow. As guests milled around exploring the venue, music group Beaty Heart performed a set on the Heineken-branded stage. 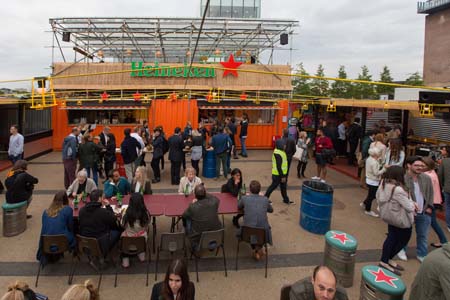 The star attraction of the night was a huge projection mapping lightshow produced by Projection Artworks. Lighting up the iconic chimneys of the power station, the main motif featured the Heineken logo silhouetted against iconic scenes of London.

Emily Gibson, senior account manager at Projection Artworks, says Heineken was looking for a memorable and shareable spectacle. "They asked us to tell the story of ‘Open Your City’, which is a key part of their campaign. Heineken empowers its drinkers to explore different areas in their cities by opening up different venues and events to them.

"RPM came up with the creative concept, tying this theme in with the content, lots of London iconography and so on. Once we had this concept, we then created the projection show incorporating all the 3D and audio-reactive effects, which were all rendered in real-time to complement the live music from Jungle."

Soul music collective Jungle took to the stage midway through the projection mapping, performing atmospheric tracks that synced with the display. Guests were given bottles of Heineken fitted with light-up bases, turning the audience into a giant, organic light show. The show ended at 11pm, with clean-up operation finished by 11am the next day. 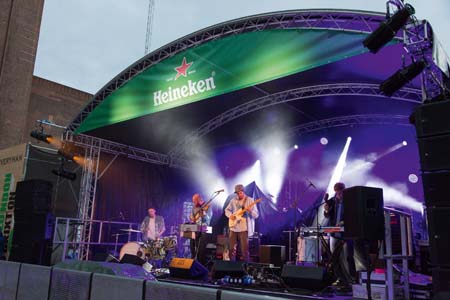 What was your initial brief?

The initial brief centred around igniting London and driving fame and awareness for the brand. We wanted to host an exclusive and one-off event targeted at Londoners to drive the brands credentials and iconic status.

How long did you have to turn around the event?

Heineken announced the night on their Star Treatment.co app only a month beforehand, so we had to organise invites, the guestlist and 900 competition winners in the same timeframe as the creative.

An event is only deemed successful if it is shared and talked about. And in those metrics, both RPM and Heineken deemed the event to be a success. On the night, the coverage was 100% positive. Performance on social media was also notable. @Heinken was tweeted 208 times – it had only been tweeted 14 times in the two weeks before so that was really satisfying to see. #OpenLondon was also trending on Facebook on the night.

Heineken opens The Power of Summer with Everyman Cinema