FESPA 2013, which is taking place at Excel London, attracted both members of the wide format printing industry, as well as international brands, agencies and media owners.

A five-day show taking place at London’s Excel between 25-29 June targeted at the wide format printing sector, bringing together more than 650 international exhibitors, with 71% of those who attended were based from outside the UK.

On day one of the show, a steady stream of visitors passed through the 63,603sqm space, comprising of FESPA Fabric and the new co-located European Sign Expo, which has made this the largest FESPA event in the organisation’s 50-year history.

Full to the brim with technology, materials and products made with the latest kit from the likes of Avery Dennison, Canon and HP, the show highlighted the latest innovations in screen, digital and textile print. This consisted of signage and graphics; flags and banners; retail promotions and point-of-sale; outdoor and indoor advertising; and interior and architectural décor. 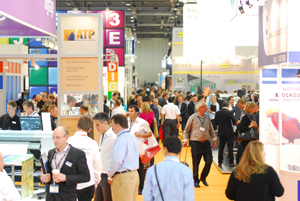 This year’s event was themed around destination London, with FESPA elements of the show depicting an airline and travelling feel, including the Print Inspiration Runway, an exhibition of print in a variety of different applications including photography and furniture.

A number of conference and seminar areas were created for a programme of industry talks, taking place throughout the five days. This included the Jet Set Conference area and the Pilots Briefing zone.

For both of these, and the majority of production areas with the FESPA 2013 show, Aztec supplied its range of equipment taking two days to install. Leo Speck, sales director at Aztec, said the biggest challenges were the open environment, budget and noise from nearby printing equipment being demonstrated.

Other highlights of the show included the Wrap Cup Masters Series, with international entrants showcasing their skills in vehicle wrapping competing for the overall title of global Wrap Cup Master.

The Creative Corner, a new element to the show, aimed to provide inspiration and information for brand owners, agencies and designers, highlighting peer insights and global brand case studies to show how print can be deployed effectively for events, brand activity and campaigns.

On the spot – Duncan MacOwan, head of events and new media, FESPA

How many visitors are you expecting over the five days?

Around 23,000, and with the digital connection, we have a new launch for FESPA which is a partnership with European Sign Federation, which is the European Sign Expo. Most of the exhibitors there are hardware companies, as well as digital signage.

That was a natural extension of our core brand, we have a lot of sign makers attending the show anyway, but clearly segmenting our offering to our audience by co-locating it as well as making it easier for people to try and extend their business.

This is the first time in a long time that we have been in London, we are a peripatetic show on a three-year cycle, and in the two years in between this event we run a digital and fabric show, so FESPA 2013 adds the screen element to the digital show.

It is roughly twice the size of the two-year event. Compared with previous FESPA shows, this is our biggest ever in terms of floor space, number of exhibitors and hopefully, visitors. We are aiming to be about 10% up on our visitor numbers in comparison to the Munich 2010 show (20,000 visitors).

What was the reasoning behing the Destination London theme?

It is an international show, and it is trying to highlight your destination for both print and business. We are all about having fun, but ultimately we want to help our visitors and exhibitors do business. The theme is to show that you can take your business in any new directions.

What is the future for FESPA and its events?

We have an international portfolio of events which is growing. Two years ago we had the main FESPA show, based in Europe, along with another event in Mexico. Now we are just about to do a show in Asia, this year we had a launch show in Brazil which happened in March, which was targeted for 10,000 visitors and achieved more than 13,000 attendees in the end.

We have also added Eurasia, which is a regional show for Asia and Eastern European countries, and we also have FESPA China in November in Shanghai. And yesterday, we announced that we are launching FESPA Africa in Johannesburg next year. 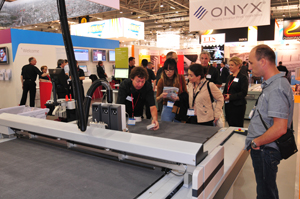 Events in Action: The London Evening Standard and Nook's Get Reading Festival

Fespa to launch in Brazil for 2013

Breaking news: Fespa to bring next major show to Excel London in 2013