When invites for 'London's first roast potato pop-up experience' landed in the inboxes of journalists and influencers, social media went into a tailspin over the mere thought of a gravy fountain appearing in the capital.

Behind the buzz was McCain - the chip connoisseur that was seeking to showcase its new frozen roast potato offering.The brand enlisted creative culinary group The Robin Collective to devise an immersive trip through the world of potatoes, housed in a blank canvas space off Regent Street on 21-23 October.

During tours of roughly an hour, guests were taken around four themed areas corresponding to the four seasons.

Spring featured the now-famous warm gravy fountain, into which guests dipped skewered roast potatoes. Potato barbecues and ice creams were on the summer menu, which included sausage and roast potato in a cone, with either cranberry sauce or gravy drizzled on top. Downstairs, autumn involved inhaling an aromatic roast dinner through a straw. The journey ended with Christmas: pulled turkey, Brussels sprouts and, of course, roast potato, in a room decorated for the festive season.

Robin Fegen, director of The Robin Collective, said: "From London's first gravy fountain to breathable roasts, we created a truly immersive journey. It certainly struck a chord with fans of roast potatoes." 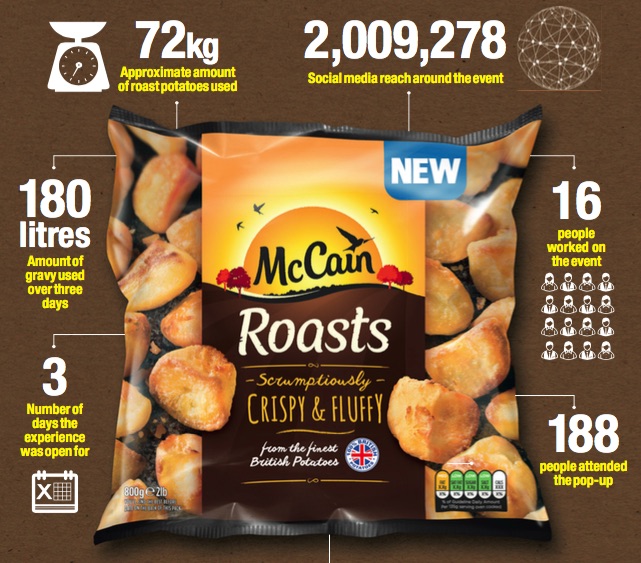