The companies' customers, along with their 'besties', were central to the activity, and those who engaged with the campaign were rewarded with a range of one-off experiences and complimentary products.

According to Hannah Webley-Smith, marketing director at Benefit, the campaign came about via social media. "Benefit and Starbucks got tweeting and quickly realised we had a lot in common. We decided that a partnership to celebrate best friends during February was the ultimate way to spread the love and reward loyal customers," she says.

Steve Flanagan, marketing director UK at Starbucks, explains that the Twitter conversation led to a meeting between both parties where they discussed ways in which each brand could give back to consumers. "Starbucks' mission is to create moments of connections with customers, and Benefit's mission is about making them feel good throughout the day," he says.

"The partnership presented an opportunity to thank our customers and give them an extra boost across the month of February."

Flanagan adds that the activity enabled Starbucks to interact with its clientele in new and unique ways. "By partnering with a like-minded brand such as Benefit, Starbucks was able to engage with a group of people who were likely to have similar interests to our existing customer base," he says. 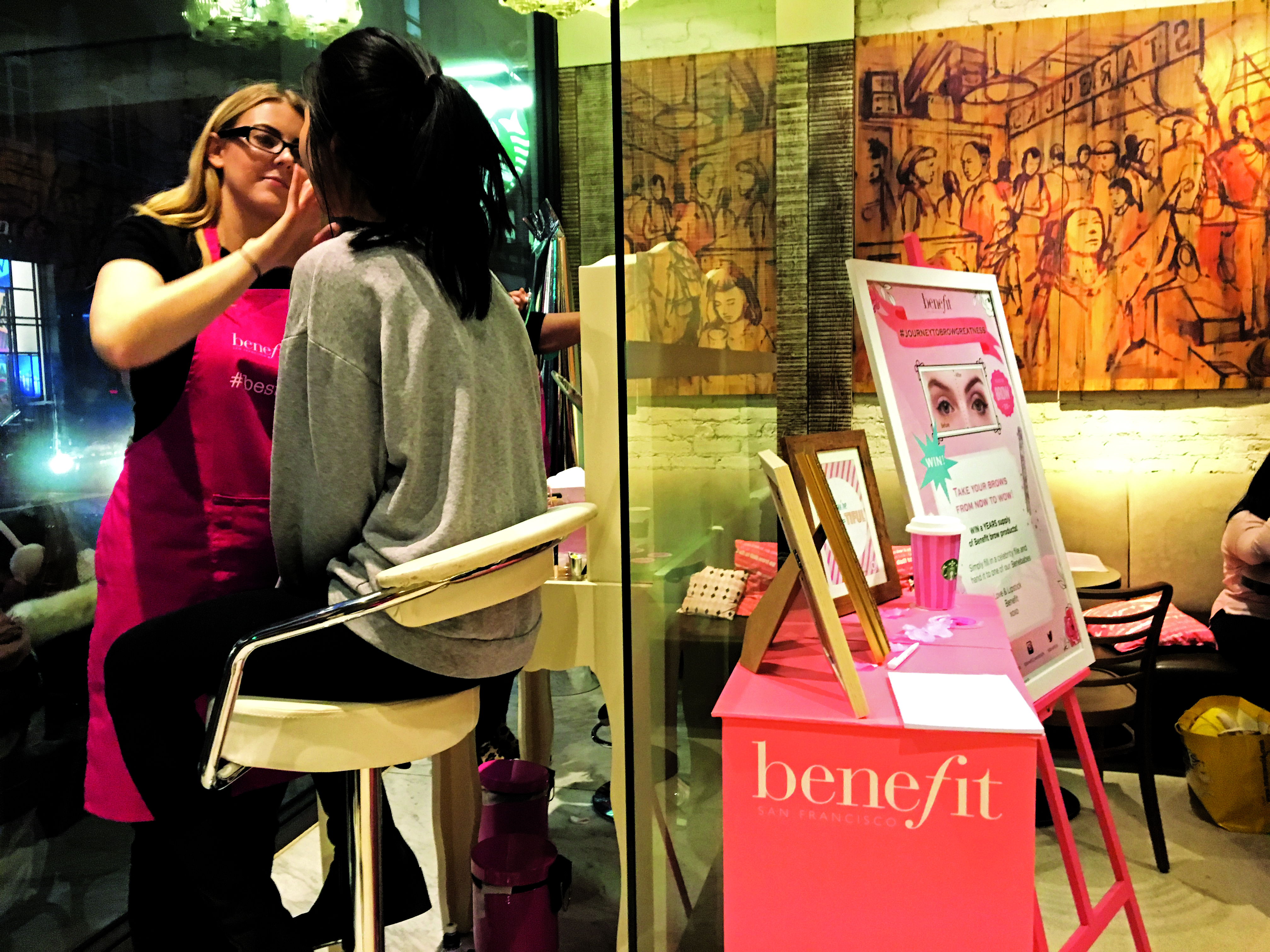 The brands devised the Benefit Parlour Road Trip, which saw branded pamper parlours pop up in Starbucks stores in London, Edinburgh and Birmingham.

Webley-Smith says patrons were invited to visit the parlours to enjoy a range of beauty services. "Customers were treated to a complimentary Benefit make-upper - which focused on complexion, eyes, lips or brows - all while sipping on their favourite brew with their bestie."

Starbucks created two one-off flavours for the occasion, rose pistachio mocha and burnt caramel latte, which were available for customers to enjoy at the three parlours and across the coffee chain's other outlets.

Consumers were also encouraged to visit Benefit and Starbucks stores to take advantage of special offers. "They could go to any Benefit boutique or counter and collect a pink coffee sleeve that could be redeemed at any Starbucks store for a buy-one-get-one-free hot drink," recalls Webley-Smith.

"Similarly, customers could visit any Starbucks store and pick up a pink emoji coaster to redeem a free make-upper at any Benefit boutique or counter."

Consumers were encouraged to follow and engage with the campaign online by using the #BestFriends hashtag. 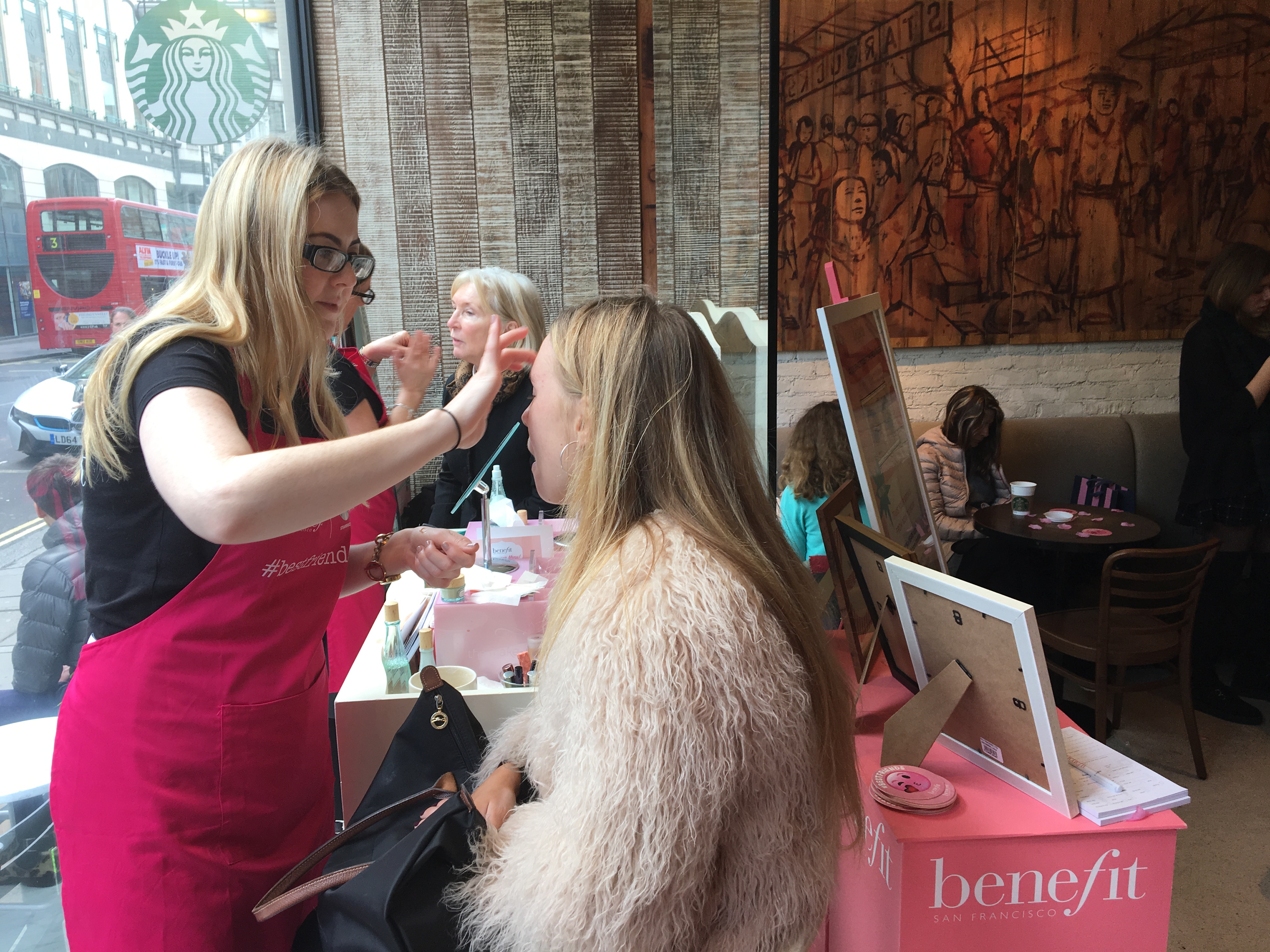 Webley-Smith says all elements of the campaign were well received by the public. "It's almost too hard to differentiate what was most popular," she says.

"While the two-for-one offer on coffee and free make-uppers were certainly the most popular elements of the campaign, customers got really excited about the pop-up pamper parlours. They were the ultimate cosy spot in which to enjoy a cuppa and make-upper."

The London pamper parlour, which visited Starbucks' Conduit Street outlet from 6-7 February, welcomed 102 attendees, with 90 make-uppers performed. Meanwhile, the Edinburgh pop-up attracted 103 customers and 97 people received make-uppers from 15-16 February. A total of 87 guests visited the third parlour, which popped up in Birmingham from 18-19 February, with staff providing 76 make-upper experiences.

"Our partnership couldn't have gone better. It was apparent that both brands had a shared audience and the Month of Love was a way of rewarding those customers for their continued loyalty." - Hannah Webley-Smith, Benefit

"Devries Slam worked alongside Benefit and Starbucks to bring the campaign to life. The partnership has been extremely popular and the pop-up parlours proved to be a great success." - Jamie Posner, Devries Slam

In pictures: The Good Ship Benefit opens its doors for business

In pictures: Starbucks opts for tea at London Coffee Festival