As the UK decides whether to continue or end its membership of the European Union, Campaign has collected the most memorable ads from the campaign. 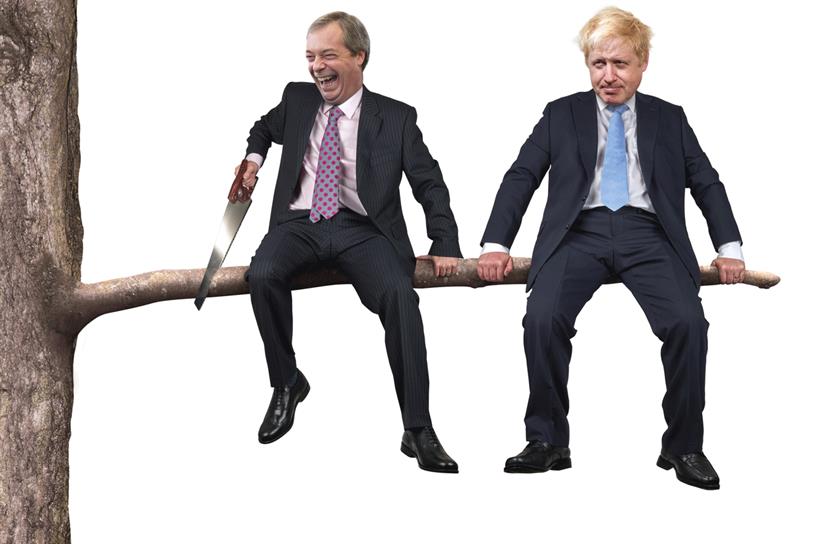 The first outdoor poster by M&C Saatchi for Britain Stronger in Europe depicted Leave campaigners Boris Johnson and Nigel Farage gleefully sawing off a tree branch they are sitting on. 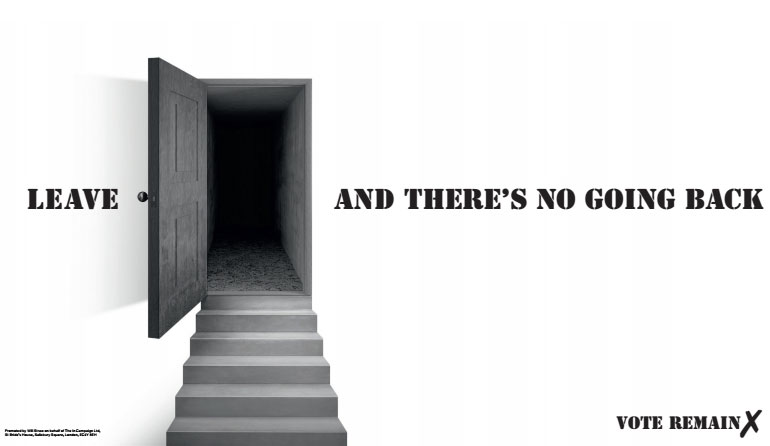 An ad released just two days before the vote depicts stairs going up to an open door that leads into darkness with the line "Leave, and there’s no going back". 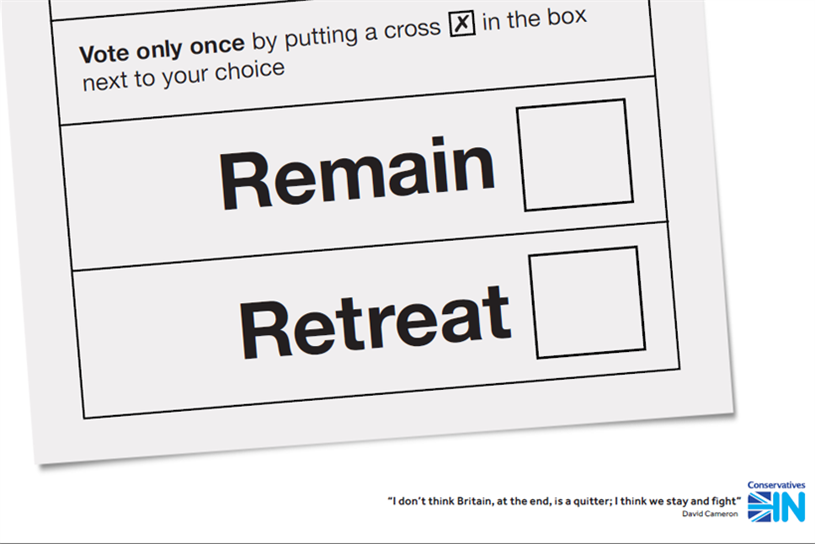 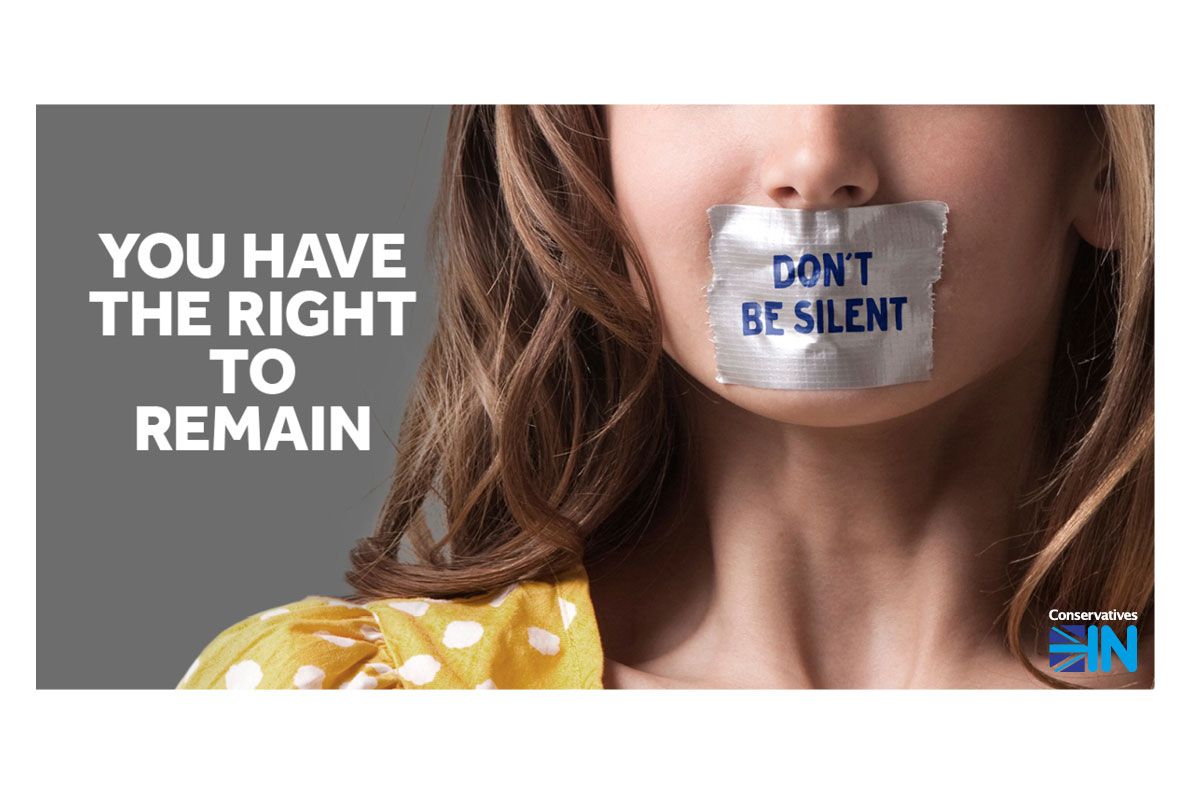 Conservatives In, the Conservative Party’s campaign to remain in the EU, launched a digital and social campaign to encourage young voters to get out and vote. It was also created by M&C Saatchi.

Love Europe, Not the EU

This outdoor campaign, which has been shared on social media, is backed by City financier and Crystal Palace FC co-owner Jeremy Hosking. It invites the public to visit BrexitExpress.com and read Hosking's Brexit manifesto.

Don't Let Them Gamble With Your Future

Britain Stronger in Europe's online campaign to get young people registered to vote in the UK's upcoming referendum has attracted criticism on social media.

Created by Venturethree, a brand consultancy, the #VotIn campaign aims to convey key issues which matter to young people with an online video, posters and a web site.

"Votin" purposely removes the 'g', as a way of highlighting all the other things that matter to people, such as "workin", "earnin", and "makin".

As campaigning got into full swing in May, the Commission launched what it hoped would be an "unmissable" campaign reminding people to register to vote. It was created by MullenLowe London.

Don't Fuck with My Future

Keira Knightley, Vivienne Westwood and Lily Cole fronted ads encouraging voter turnout ahead of the referendum, in which they say "it only takes five seconds to fuck with my future".

The online films, created by Adam & Eve/DDB, urge people to use their vote in the nationwide referendum on 23 June and are meant to highlight the short amount of time required to vote – compared to the long term impact of the result on people’s future.

Labour In for Britain 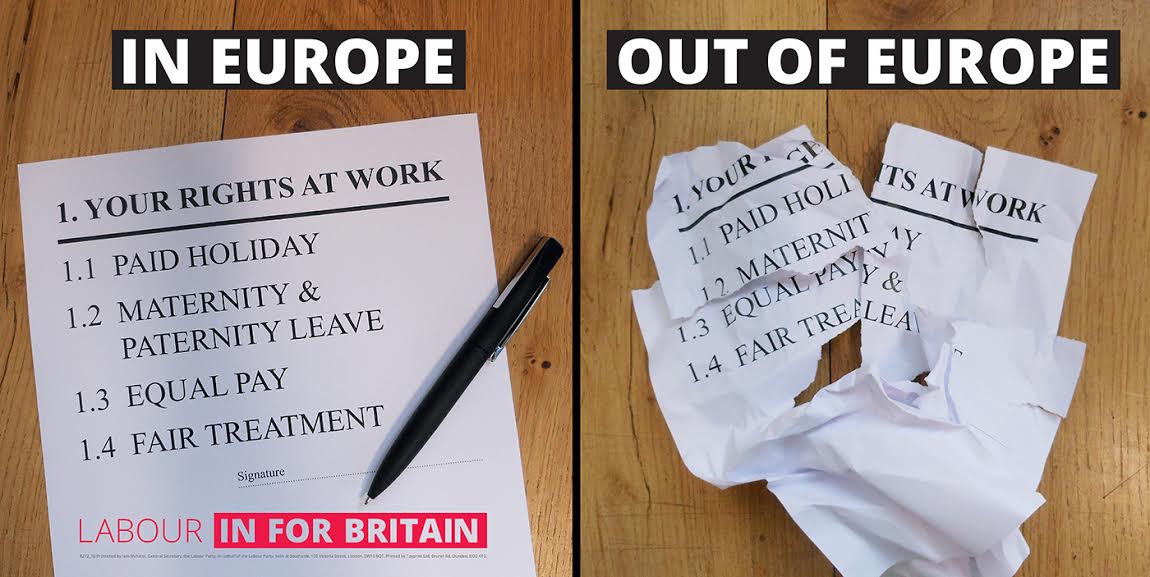 The Labour Party launched its own party political poster calling for Britain to remain in the EU. It sets out the workers rights that the party says would be lost if the UK voted to leave. 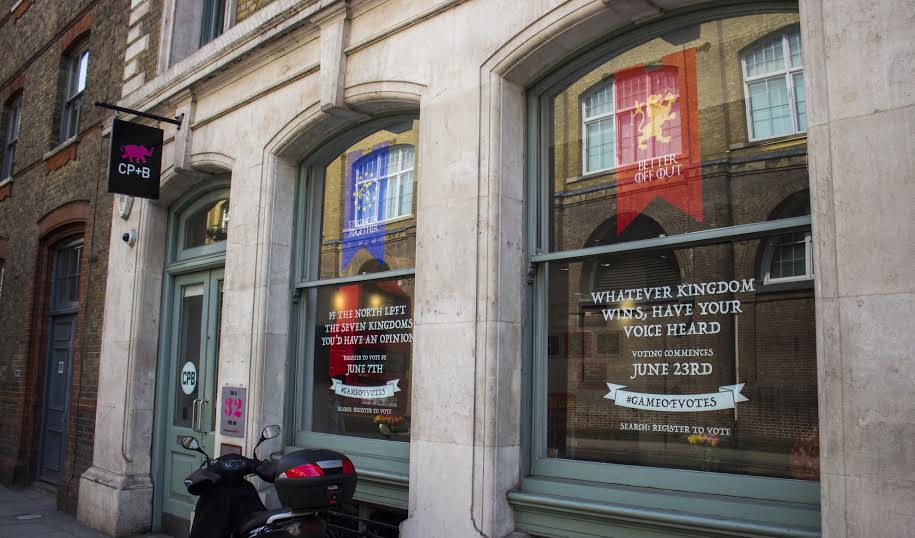 The ad agency transformed its shopfront in King's Cross into a Game of Thrones-inspired call to action to get out the vote.

"With a healthy dose of tongue in cheek and some GoT hype thrown in, we’re aiming to capture the attention of passersby and, hopefully, encourage any laggards to register - whilst reminding everyone to vote on 23 rd June," said Arjun Singh, the agency's operations director.

The brainchild of the agency's founder and chief executive, Michael Moszynski, the "We the People" campaign gives a platform to eight Brexiters, who voice their concerns about the EU and why they look forward to Britain’s future outside it.