Marketers should follow some basic principles if they don't want to end up all :-(, writes the managing director of Ayima.

When emojis were created back in 1999, their purpose was to facilitate clear electronic communication.

As SMS and instant messaging spread rapidly throughout Japan, Shigetaka Kurita, the father of emojis, realised that text alone struggled to convey tone.

The ambiguity in text and popularity of picture messaging (despite slower download speeds) drove Kurita to begin the initial designs that would lead to emojis as we know them today.

Emojis quickly caught on around the world, and it’s estimated more than 5 billion emojis are sent on Facebook messenger every day.

In addition to personal communication, companies worldwide started using emojis to help them appear "glocal" – owning both a global presence and a local ‘next-door-neighbour’ feel that understands your culture and preferences.

But marketers should beware. Brands can sometimes get it right, but more often than not they don’t. Just as language and imagery is open to wide-ranging interpretations, the "global" language of emojis has become increasingly susceptible to wildly varying meanings.

The contextual evolution and ambiguity of emojis means they adopt culture-specific meanings.

Take "getting your nails done": it can now represent a sense of accomplishment and ability to ignore detractors.

While one generation may read it one way, another may interpret your message as a subtle jab at someone.

The divide in understanding emojis is geographical too. The thumbs-up emoji means "nice one" or "good" in the UK. But in Iran the gesture is considered rude, especially among the older generation. At best you seem out of touch, at worst you cause offence.

Additionally, technological differences can alter an emoji’s meaning, even if the sender and the recipient share the same culture and understanding of the emoji in question.

Back in 2014, users discovered that the yellow heart emoji on iOS was actually depicted as a hairy heart on Android. While a strange and rather innocuous change in the grand scheme of things, it could lead to some rather embarrassing miscommunications when combined with cultural adaptations.

Some companies have been able to adopt specific emojis to represent their brand. The pizza slice emoji has gained acceptance among the Twitter community as an official part of the Domino’s brand, through the ability to order pizza by texting Domino’s the pizza emoji.

But for every Domino’s or McDonald’s there are far more brands that have had less success. House of Fraser became infamous in the marketing world in February 2016 with their "Emojinal" campaign, which alienated its regular customers and failed to attract the millennial audience they were pandering to.

Most commenters found it embarrassing that a company with a 167-year prestige was attempting to be "cool". 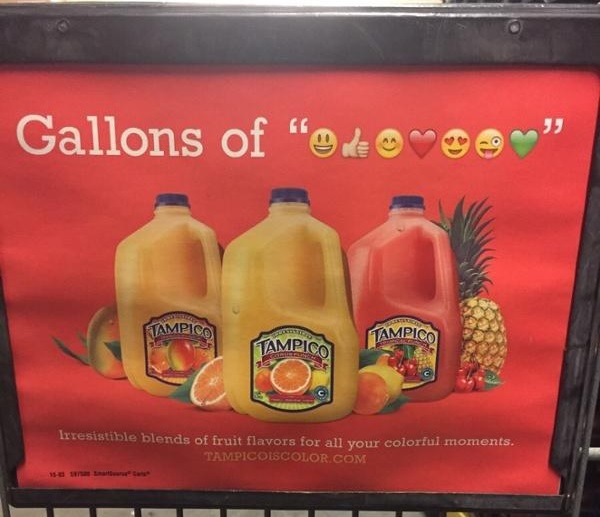 Others, such as US juice drink brand Tampico, have created campaigns that are baffling to anyone trying to understand what their actual message is.

Emojis are an easy way for companies to connect with younger generations, but it’s important to understand that they are not the one-size-fits-all addition that will make your campaigns interesting.

A strong message with a good creative is still the most important part of any campaign. And when emojis come with such loaded issues, you have to ask yourself, do their benefits really outweigh their negatives?

To avoid the pitfalls that many companies there are three key things to consider before using emojis in your marketing campaign:

Don’t feel you have to do it

Only use emojis when they make sense contextually. If it’s not necessarily relevant to the brand or context, then don’t feel the need to jump on the bandwagon or think that adding in an emoji will automatically win you the admiration of millennials or Gen Z.

Google is your friend. Googling what the aubergine emoji means could save you some embarrassment before you launch your brand new aubergine emoji-centred campaign. This is true for every emoji – it’s crucial that you know what the latest meaning is.

This is the marketer’s golden rule. A younger audience might appreciate an "edgy" emoji compared to an older one, who’d be more familiar and comfortable with those more frequently used.

While marketing communications are currently inundated with emojis and "millennial speak", it’s hard to guarantee that these fads will survive in future years, because what’s appropriate now may not be fit for the future.

And when people look back on your campaigns, they may been seen with the same disdain that we have for the sort of ads that populated the 1950s.To remain timeless, marketers have to get emoji marketing exactly right, or come up with something more creative, to endure.

It's the technology, stupid: why Domino's slice keeps getting bigger

What learning disability has taught me about creativity

If advertising is going into the content business, who will take care of the brands?