Last month, femtech brand Elvie made quite the splash with an unconventional billboard raising awareness of urinary incontinence. With the help of Elvie’s agency Don’t Cry Wolf and out-of-home specialist Kinetic, "#LeaksHappen" did more than just simply smack some words on a page and call it a day.

Located in Shoreditch, the 10-foot billboard pictured 28-year-old Megan Burns from Cornwall, a mum of two and real-life sufferer of urinary incontinence. Burns is shown in a powerful stance, weightlifting in a squat position and experiencing a leak. This candid approach to the issue doesn’t stop there, as the billboard doubles up as a water installation with real liquid dripping from between her legs. 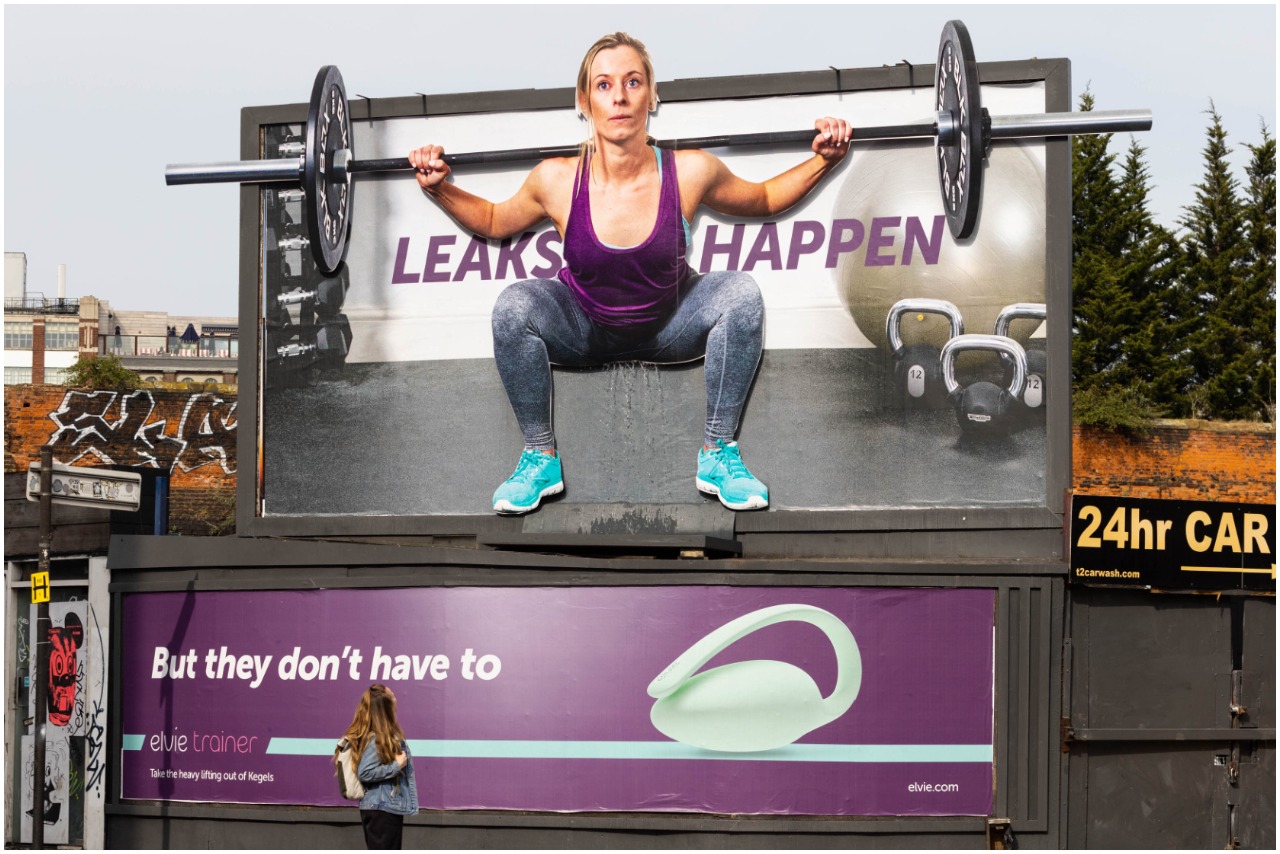 This is all part and parcel of Elvie’s mission to smash the taboos surrounding women’s health through promoting its technology, which currently includes a breast pump and a pelvic floor training device. Although the products Elvie offers may have an atmosphere of “hush hush” around them, Elvie has no intention of pussy-footing around its marketing.

A big part of Elvie’s strategy is sparking conversation, according to the brand’s chief marketing officer Aoife Nally, and what better way to do that than with a giant pissing billboard?

“Women's health issues are very overlooked, and some like incontinence are still taboo,” Nally explains. “So for us at Elvie, being silenced is just not an option; we continue to look for ways to start a conversation and get people talking.

“We wanted women to walk past it and feel like they're not alone in their suffering. It's very much a normal issue. But more to the point, there are solutions to help solve this problem.”

Despite Nally’s point about these issues being normal – with 84% of UK women experiencing incontinence – the work came about two weeks after TikTok creator @maddawglifts posted a video on Elvie’s page of her leaking urine while weightlifting, which TikTok then banned for being too graphic.

This is not the first time the brand has experienced push-back. In the summer of 2019, Don’t Cry Wolf planned for Elvie to sponsor the Edinburgh Fringe Festival with its Pissing Booth pop-up accompanied by a 19-foot vagina blimp called Fanny. The festival abandoned ship just 10 days before the event, telling the brand that the pop-up wasn’t suitable.

As a form of protest, Elvie and Don’t Cry Wolf decided to go ahead with "#LetFannyFly" by putting Fanny in a nearby sheep farm 30 minutes outside Edinburgh. This jaw-dropping stunt was used to promote Elvie’s change.org petition calling for the ban on vaginas at the festival to be lifted. The petition received more than 4,000 signatures and Fanny garnered a wealth of coverage through the press and on social media, with Elvie’s website traffic increasing by 35% on the day of the campaign’s launch.

“It was a hiccup in terms of what the original campaign brief was,” Nally explains, “but the awareness and engagement that we drove off the back of that campaign far exceeded our expectations.”

Sara Collinge, managing director at Don’t Cry Wolf, says reactive brand activism campaigns have been getting more attention in recent years. This is because brands like Elvie are essentially being given more of a platform when organisations ban something or intervene. “I think that's why it became more potent, because it just felt like we actually had something to campaign for,” Collinge explains.

“When you've got a purpose and an action that you want people to take, that's when those campaigns work really well.” She adds: “Edinburgh Fringe probably did us a little bit of a favour in the end.”

Elvie has had a constant battle with censorship, whether it’s real-life censorship in the case of Edinburgh Fringe or online censorship in the case of its weightlifting TikTok. Nally explains that the brand has worked closely with social media channels like Facebook in order to solve the issues of censorship in its content, but she adds: “Even to this day, in order to get our ads approved, we have to go through a manual process because they will be rejected by the system, which is incredibly frustrating.”

Out-of-home stunts are therefore a valuable tool for the business as they give complete autonomy for the brand to express exactly what it wants to communicate, while pushing for more creativity in order to truly make an impact. "#LeaksHappen" and "#LetFannyFly" encapsulate just that, as well as Elvie’s work with creative agency Mother in 2019. In celebration of Mother’s Day, Mother placed five inflatable boobs around London to champion breastfeeding and "#FreeTheFeed".

“The out-of-home medium is really helpful for starting conversations with the public; it's definitely a moment in time, it's a big statement,” Collinge says. “Walking past something like that on the street, anecdotally will get people talking.”

Collinge notes the number of messages she receives from women saying how pleased they are to see stunts like these: “It gives a sense that Elvie is really empathising with women and advocating on their behalf, and that’s a really powerful recipe for outdoor success.”

Despite this positive feedback, no-nonsense imagery of a woman peeing herself is bound to ruffle some feathers. “There are always a few people that are going to be naysayers and criticise the campaign, but they are typically not the people that we're looking to target,” says Collinge.

“We've definitely had a few criticisms aimed at us but that just shows that it's working. It's obviously agitating people and getting under the skin of the debate; it's raising the profile of these kinds of issues and tackling the taboo that does still very much exist.”

Nally adds: “Our brand has a role and has a voice to play in amplifying those issues. We believe if you're really going to drive change, you've got to start the conversation, and it's going to be a two-way battle.”

Elvie seems to be striking a chord, with its marketing and with its business performance. According to Nally, “a big chunk” of its series C funding, which was recently raised to $97m (£76.3m), will be going towards diversifying its product portfolio and creating new tech as well as geographical expansion into new markets. Nally explains that the brand will be focusing on Europe while also hoping to grow its presence in the US and China.

With Elvie proving there is a deserved place in the market for femtech, the space is likely to see some more competitors emerge, but Nally doesn’t see these start-ups as competition and instead views them as having more partners to help tell the story. “We're actually very excited about the femtech community that is rapidly growing,” Nally explains. “But like anything else, we want to make sure that we're front and centre of that community.”

In order to ensure Elvie remains at the steering wheel, the brand isn’t going to take its foot off the pedal when it comes to its fun and unapologetically outrageous out-of-home stunts. “Taboos are taboos for a reason; they are very entrenched and deep-set beliefs that are held within society, and they can’t be dislodged and disrupted easily,” Collinge says. “So, you have to shout louder and I think that's what Elvie's approach does far better than a lot of other people on the market.

“So long may it continue, long may we continue to be ‘outrageous’.”

Pick of the Week: Elvie’s peeing billboard is a shower of delight