Creating an emotional connection is a key element in the success of an online ad, according to research from DoubleClick Rich Media.

Key attributes of effective ads include attracting visual attention and the creation of emotional engagement.

The results indicate that top-performing ads use motion and recognizable faces to attract visual attention and direct it to key messages, shift the viewer’s role from passivity to being part of the plot, and use auto-loop and auto-play functions.

DoubleClick engaged biometric research firm Innerscope, Inc, of Boston, Mass, to analyze the video campaigns determined to be the UK’s best performers in the second half of 2010 based on click-through rates and other interactivity data.

These included campaigns by Adidas, Littlewoods, and Samsung. A combination of eye-tracking and biometric monitoring was used to measure visual attention and emotional engagement.

The results provide a scientific basis for certain assumptions about ad creation, and demonstrate how successful campaigns have employed them.

However, getting the viewer to notice the ad initially is not enough. Successful ad units also take advantage of these techniques to guide visual attention to key messages.

For example, one ad featured a man walking across the width of the ad and immediately afterward placed key messaging directly above his face.

Visual-attention data affirm that consumers do not necessarily view rich media display ads from start to finish. Rather, an element within the middle or the end of the ad will often draw attention.

Ads that auto-loop can take advantage of a captive audience to deliver the rest of the messaging.

People often look away from ads that caught attention in the middle of the animation but then do not auto-loop: they do not have enough information to motivate them to take action by clicking.

Successful ads also creatively shift the consumers’ role from a passive viewer to an actor in the story plot.

Many of the ads bring the viewer closer with sophisticated camera shots, some of them resembling a TV ad or movie trailer.

These ads often included a story arc to bring people on an emotional journey.

Results from the Adidas campaign indicate that the online ad effectively used famous athletes, action scenes with motion and color, and auto-play to draw visual attention.

This ad was noticed by over 50% of the audience and on average, those that looked fixated over 10 times.

Music and audio helped build a story around the athletes and generate a strong emotional connection.

Nick Adams, digital planning director at Carat Global, said: "This research proves that the high levels of awareness and response generated by the Adidas 2010 World Cup campaign were not only thanks to timely and relevant placement of the advertising, but also to the powerful mix of iconic athletes and exciting action sequences within the creative.

Celebrities and engagement over the course of an ad 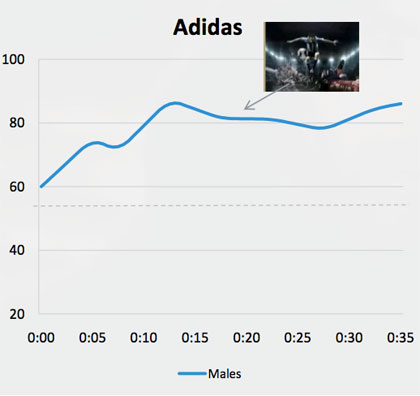 Motion and engagement over the ad 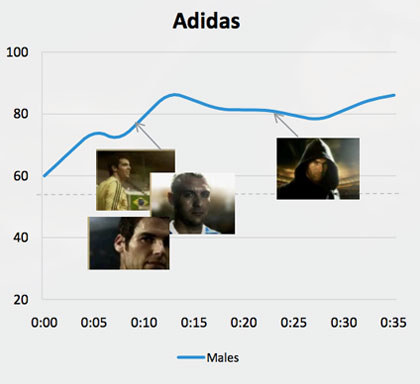 The engagement map above shows that emotional engagement increases to a peak moment when the faces of elite athletes appear on screen.

Engagement is maintained during the 'action scenes', which incorporate sophisticated visuals and slow motion effects.

This ad has the look and feel of a movie trailer with music and audio that tell a story and will likely help build drama and increase emotional engagement.

Results from the Littlewoods online ad indicate that the use of celebrities was also effective for a retail client.

Showing the celebrity at the start of the ad helped capture visual attention and emotionally engage the audience.

Motion also drew attention: when the model was changing outfits with a wide variety of colors, eye-tracking showed that viewers were drawn to the ad.

The call to action button, which was on auto-loop, also drew attention and helped the overall success.

This ad was noticed by more than 73% of the audience and on average, those that looked, fixated over 10 times, which is very strong. 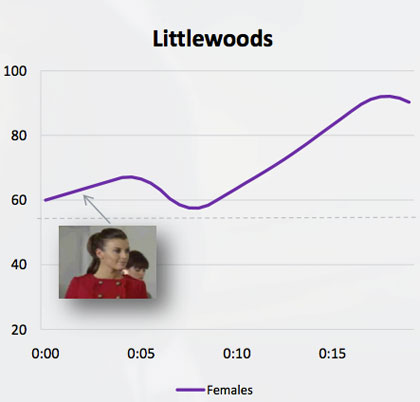 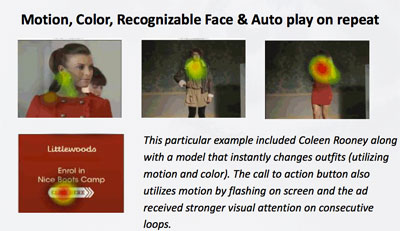 The loading screen at the beginning of the ad correlates with increased engagement, perhaps as a result of anticipation. 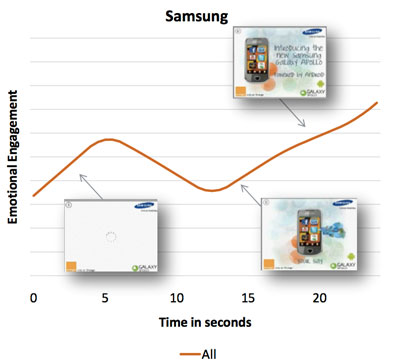 The research suggests that a successful online ad must draw visual attention. As webpages tend to have many elements competing for attention, the successful ad must stand out from the rest of the page to attract attention.

Techniques for achieving this include: movement within the ad, changing colors, the presence of faces - particularly recognizable faces - and having the ad auto-play and loop.

A successful online ad creates an emotional connection. Getting the viewer to initially attend to an ad is not enough.

Once attention is drawn, an ad must create and maintain an emotional connection or the viewer will quickly disengage.

Some elements to consider for building a connection and holding the viewer include motion, faces, music and audio, as well as progressive elements (such as a story arc).

Trends in audience behaviour around TV and online video

The effectiveness of consumer choice on pre-roll advertising