Brands are adopting a 'test and learn' approach to marketing strategy. Recent IPA Effectiveness Awards papers show how it can be done -- without compromising on creativity.

The most effective advertising has always been a blend of art and science. However, with the proliferation of channels and technologies, it is potentially more difficult to gain cut-through for the art in advertising, and more intellectually challenging to deal with the science.

While the meaning of "art" is often a subject for debate, the dictionary defines science as: "The intellectual and practical activity encompassing the systematic study of the structure and behavior of the physical and natural world through observation and experiment."

With this definition in mind, taking a scientific approach to marketing would involve making greater use of "systematic study" and "observation and experiment" to develop communications strategy and execution and to build experiments and feedback loops into everything a brand does.

But where can we learn about how brands have effectively applied science’s "test and learn" mindset in practice?

Winning papers from the most recent IPA Effectiveness Awards provide several pointers. They demonstrate how to benefit from a more scientific approach to marketing and communications, without undermining the transformative potential of great insight or creativity.

Test and learn is a philosophy not a campaign idea
Sir Clive Woodward, the coach of England’s 2003 Rugby Union World Cup-winning team, famously said his team’s victory was "not about doing one thing 100 percent better, but about doing 100 things 1 percent better."

Both Sir Clive—and Sir Dave Brailsford, his equivalent in the world-beating British cycling team—have been influential proponents of the view that outstanding performance is often the product of striving for systematic, marginal gains rather than large uplifts. They argue that to be effective such an approach needs to be part of an organization’s DNA, with enough time provided for gains to accumulate and yield their full benefits.

This holds true in marketing. There is no point in applying the marginal-gains approach to one campaign or channel. It needs to be a holistic, long-term endeavor to enable learning and optimize the approach across all a brand’s marketing activities.

For example, Plusnet, the Yorkshire-based broadband provider, focused on testing and learning to drive its business growth over five years. As the brand’s 2016 IPA Effectiveness Award-winning case study sets out, Plusnet adopted a suite of measurement techniques to modify its tonality, messaging and media mix over an extended period. The strategy enabled Plusnet to alter subtly the communication of its Yorkshire values to emphasize it was a national brand, not a regional one, and maintain its growth momentum in a dynamic and highly competitive market.

Make sure the business tests and measures the right things
Too much optimization is focused on intermediate metrics or looks only at a few channels in the mix, or short-term sales results. This is misleading because the display return on investment might look great this month, but the longer-term brand equity and awareness may be suffering as a result of off-brand creative, or diversion of budgets from brand-building into short-term activities.

What is more, it is possible to optimize strongly in the latter stages of the purchase funnel to deliver a very strong return on investment through re-targeting, for instance. However, the total volume of sales or revenue may dip significantly, or a brand may start to compromise the "top of the funnel" that the business relies on for future success.

Successful approaches such as that adopted by Direct Line (see box below) blend long- and short-term objectives, ensuring that these are consistent with long-term brand and business health, while also delivering more immediate sales impact.

Measurement can also have wider benefits such as creating benchmarks for future activity, by supporting more risk-taking and innovation in an organization, and in spreading industry learning.

We still need great insights to form hypotheses to test
When brands are using multi-variate testing and learning on the fly, there is clearly a danger that not enough thought will be put into the initial strategy, proposition or creative because people may think: "We can always change it as we go." However, the evidence from the 2016 winners highlights that a strong underlying insight often drives brand success.

For example, by data-mining, the Australian swimming pool-maker Narellan Pools pinpointed the moment when consumers first aspired to buy a swimming pool as well as a clear tipping point when they were most likely to move from consideration into purchase mode. This insight drove the brand’s entire, digitally led strategy, and Narellan was able to optimize further as it went to market.

Using science does not mean we can forget the art
When using multiple copy and optimization techniques, it can be the case that the initial creativity goes out of the window and ads become very utilitarian. It is therefore crucially important that as much effort goes into the creative development of a research-based idea as with any other activity.

In a note to its winning case, which featured the creation of digital ads on the fly and programmatic media placement, The Economist client emphasized this creative element, saying: "We tested machine-generated, dynamic creative and it was consistently and significantly outperformed by crafted communications."

Do not kick yourself for mistakes—see them as chances to improve
In business, there is generally too much negativity around failure. As a result, people tend to cover up mistakes when things do not go according to plan. Instead, we should view everything we do in marketing as an experiment in which there are lots of opportunities for those 1 percent improvements the next time round.

Rather than apologizing for sub-optimal results, we should look forward to identifying areas for improvement and be much more open about how we tackle them for our next campaign. After all, that is what learning is all about ...

Faced with market-share losses to price-comparison websites and competitors, Direct Line used a broad set of research tools to look back and pinpoint what was not working and establish a new organizing principle to differentiate it from the competition.

Research underpinned its decision to adopt "hassle-free insurance that just works guaranteed" as the ethos linking everything from its service propositions through to its call centres, website and ads featuring Harvey Keitel's fixer character from "Pulp Fiction."

A long-term testing program also encouraged the brand to drive the efficiency of its media mix.

The advertising campaign launched in mid 2014 and by February 2016, the brand had recorded 12 months of increased volumes of both car and home insurance volumes, improved its brand metrics and staunched the decline in policies.

Stretching a modest budget to provide combinations of older and newer media, the "Talking Ice Creams" strategy profitably grew the sales and share of Wall’s Classics for the first time in years.

The core insight was that the brand was loved but forgotten.By creating a humorous series of outdoor and digital ads placed near points of purchase and activated in hot weather—Wall's put the product smemorably back in front of consumers.

Econometrics estimated that the strategy delivered £1.84 of short-term revenue for every £1 invested, before adding in longer-term benefits. The approach was later adapted for 120 previously unsupported Unilever ice cream brands in 30 countries. 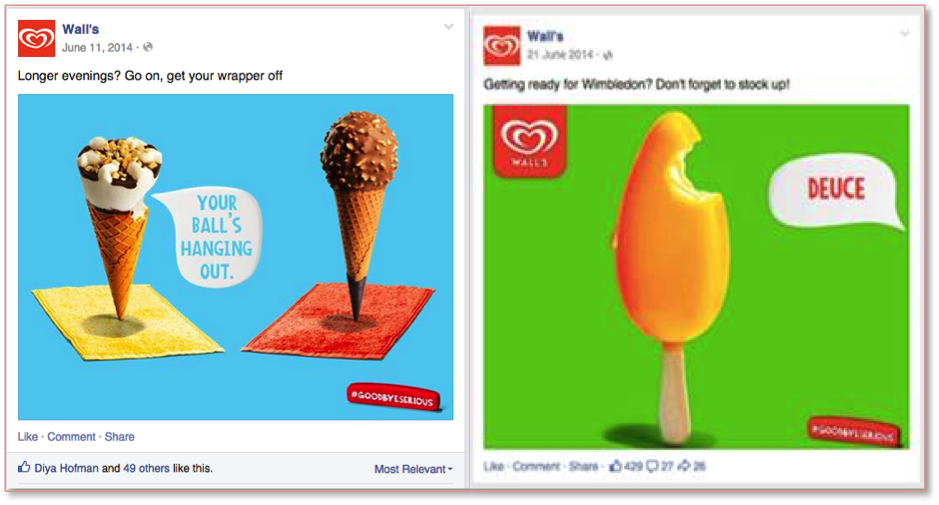 —Jonathan Allan is the sales director of Channel 4, and was a judge of the 2016 IPA Effectiveness Awards. A version of this article appeared in the IPA book, "Advertising Works 23." Awards case studies can be purchased here.