The growth and success of EE, which is only five years old, make it a classic "nothing is impossible" story.

Given EE’s presence and stature, it’s hard to imagine that just five years ago the brand didn’t exist. If EE were a child, it would only be in year one of primary school. The growth and success of the brand makes it a classic "nothing is impossible" story.

Today, as part of BT Group, EE is the largest mobile network in the UK with nearly 30 million network connections. And, unlike any other market-leading network in Europe, it is in revenue growth.

This success has much to do with EE’s determination to deliver 4G to the UK before any of its rivals and to stay consistently ahead of them. But it is also because EE believed in magic – or, rather, in restoring magic to the network.

A category that had given up on the future

When our story begins, the UK mobile landscape was rather different. The market was dominated by O2, with Vodafone at number two. EE’s predecessors, Orange and T-Mobile (run as a joint venture by France Telecom and Deutsche Telekom, named Everything Everywhere), were third and fourth, while value players such as Three and Tesco brought up the rear.

And, to be honest, the category had lost its way – particularly when it came to value creation. The commodification of texts and talk meant that you could run a huge out-of-home campaign offering people "free texts and minutes for life" and they would simply shrug and walk by. Of course, the future was all about data but few operators were making a success of selling 3G services at the premiums that were needed to keep their businesses and the sector healthy – the saviour of the category was being given away.

‘Any sufficiently advanced technology is indistinguishable from magic’Arthur C Clarke

But more than this, the big mobile networks had forgotten the business that they were in.

The quote above, from science fiction writer Arthur C Clarke, reminds us that whenever a new technology emerges that transforms our lives (from the steam engine to driverless cars), it appears to most of us like magic. And we have a magical and valuable relationship with that technology.

At the beginning of this decade, the mobile category should have felt like this. Smartphones and 3G services had brought the internet on to our devices, created an explosion in capability and transformed the role of mobile in our lives.

In a way, the magic was back in mobile – but for the devices rather than the network brands. It was your iPhone that you felt was truly magical, not the network upon which it depended and without which it was a lifeless piece of elegantly designed plastic. It was the device brands that got all the credit.

You could feel the resignation of the network brands – particularly in their marketing, which was focused on ancillary activities and reward programmes rather than the service they provided. Brands were more famous for their music venues than the magic of their networks. 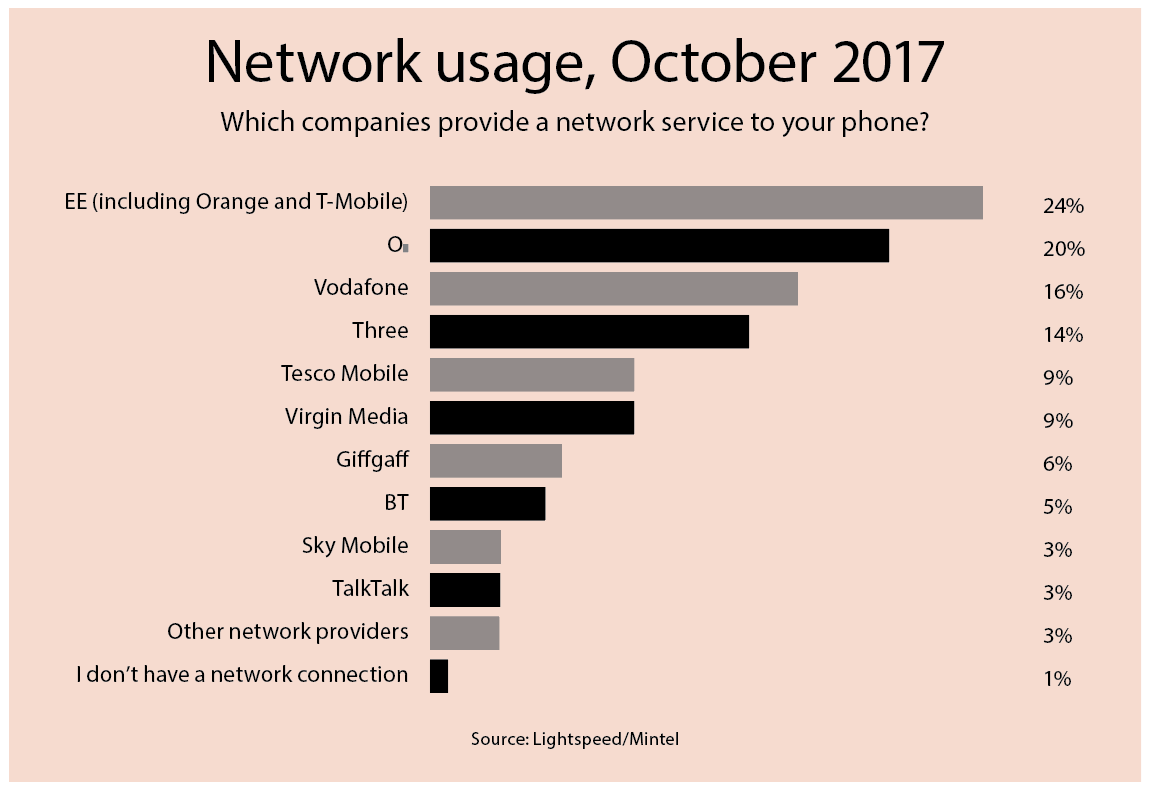 By 2011, a technology promising to transform the power of networks to deliver magic into people’s hands was already on the horizon. The UK government had decided the auction of the spectrum that would facilitate the introduction of 4G services would take place in 2013.

4G would deliver a massive increase in speeds and capability, bringing real-time data delivery to people’s devices so that many activities could be performed in an instant – streaming music and video became fast enough to be practical for the first time.

It also offered an opportunity to do two clever things if you were a network brand. It brought the focus back on to the network, making it powerful and exciting again. And it created an opportunity to return value to the category by offering this new service at a premium to 3G.

It’s then that things get really interesting.

Everything Everywhere had worked out how to repurpose the 2G spectrum (used by Orange and T-Mobile) to deliver 4G without waiting for the official auction. Being the first network in the UK to offer 4G ensured clear product superiority for a year and a first-mover advantage that has kept it ahead of the competition ever since.

Everything Everywhere also decided that a dramatic rewiring of the category, its capabilities and economics required a new brand. One that would embody the spirit of innovation and the magic of the network, as well as providing a platform to create greater value by offering a premium service. A brand that would place people at the heart of their digital lives and put the magic back into the network. ›

And so, on 30 October 2012, EE was born, offering 4G services to the UK for the first time and a year ahead of the rest. 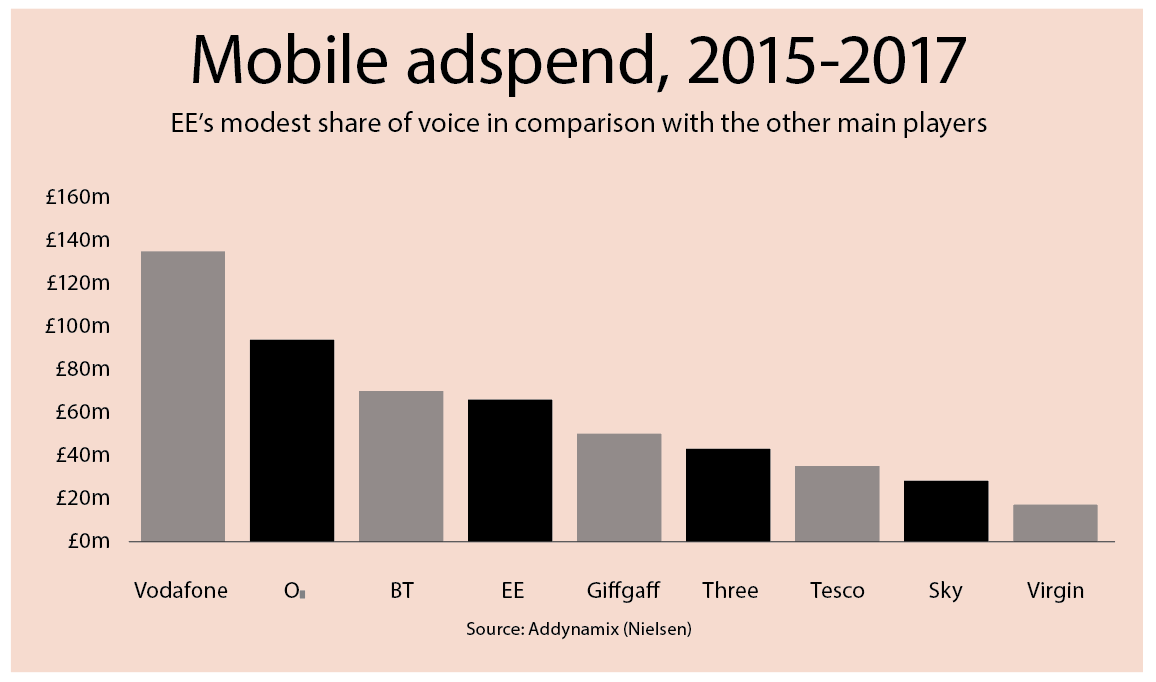 The power of context

So how do you launch an unknown brand in the UK, selling a technology that no-one knew they wanted and even fewer understood?

Well, you carefully construct the name, identity and meaning of that brand, of course. EE was chosen as the new brand name and acquired its famous aqua and yellow livery to distance it from the design codes of the mobile category. The ethos of the brand became Now You Can, which exemplified the game-changing power of 4G in people’s lives.

‘Kevin not only creates fame and cut-through for EE, he has had a major hand in making all this new tech feel like it’s not scary’

But you also need to understand the context in which the brand will be launched. Since the financial crisis, the UK has been a place of huge uncertainty about the future of our nation and our individual lives. One of the pivotal decisions taken in 2012 was to do nothing in communications to add to that uncertainty.

From the start, advertising from EE would focus on the power of 4G, the propositions that were being brought to market and the experiences that people could have right now if they were on the network. 4G was magical but there would be no nebulous brand philosophy about the future of connectivity or grandiose analogies about the service. The brand would be built on the stuff that EE allowed you to do for the first time – nothing more, nothing less.

And there was Kevin, of course. 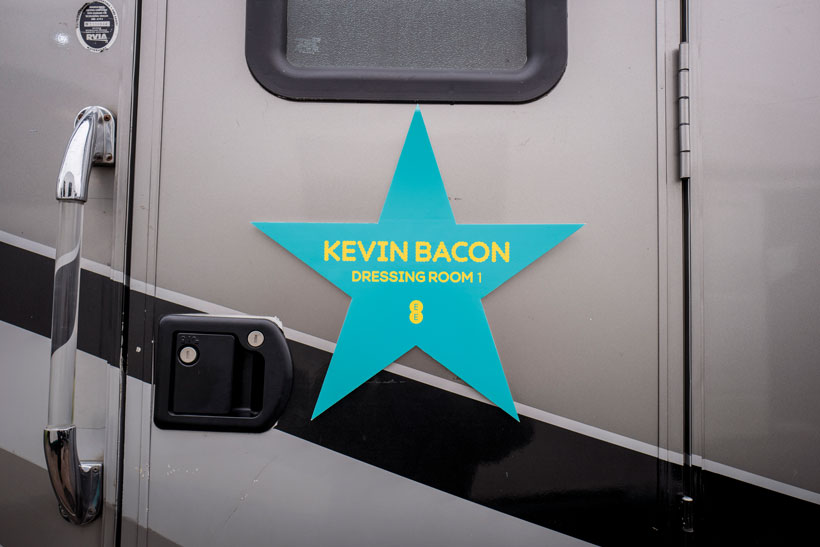 A slice of Bacon

However, he is an essential ingredient in EE’s successful launch and the subsequent performance of its advertising and brand.

Kevin was chosen to show how EE placed people at the centre of their digital life and the things that are most important to them. As Hollywood’s most connected actor, and inspiration for the Six Degrees of Kevin Bacon game, he exemplifies this connectivity. But Kevin doesn’t work because he dramatises the role of EE in people’s lives so well. He works because of the way he is employed by the brand.

In EE’s world, Kevin is not just a Hollywood A-lister – he’s one of us. EE is a British brand – the role and dialogue we give Kevin creates a sense that he is British. After all, how else would he know Rachel Riley or Rio Ferdinand so well, or the plots of 1990s soaps? By pulling off the conceit that a much-loved US movie star is actually the boy next door, we have been able to cement EE into British culture with precision, helped with the judicious use of language such as "no brainer" and "it’s the nuts".

The result is that Kevin not only creates fame and cut-through for EE, he has had a major hand in making all this new tech (from a new and innovative brand) feel like it’s not scary or distant. He makes the magical feel familiar.

After five years of network building, proposition delivery, brand activity and consistent marketing communications, the outcome is an extremely healthy brand and business. One that now sits at the heart of BT Group’s consumer offering after its £12.5bn acquisition in 2016.

It is clear that there is a powerful link between EE’s advertising performance – which does so much to land the capabilities of both network and propositions and consideration of the brand – and the potency of the EE brand and its commercial performance.

EE remains outspent by the competition, most notably Vodafone. But at the heart of EE’s ad performance sits one of the most efficient attribution engines in UK advertising – Kevin Bacon. With his help, EE is able to convert ad expenditure into brand and business effect with incredible efficiency. 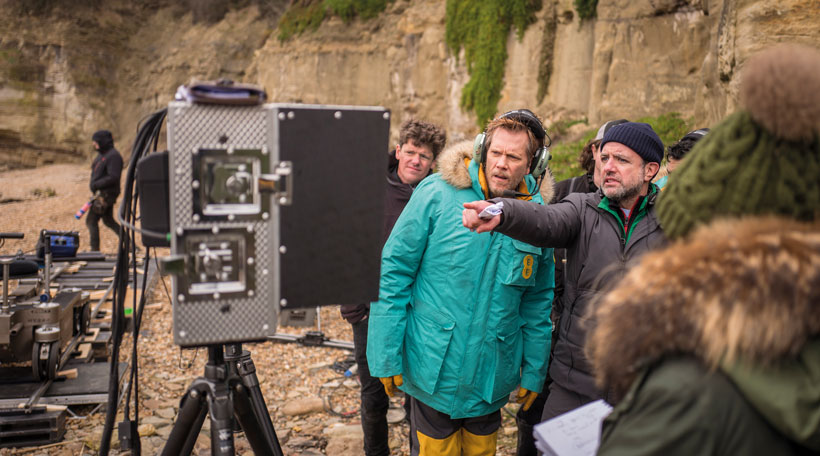 Very strong ad performance for EE maps on to exceptional brand performance, aided by strong delivery across the whole spectrum of communications and brand experience. EE quickly established a lead in innovation metrics given its superior network. But at the beginning, value and service metrics didn’t always perform at the same pace.

And strong brand performance has underpinned robust commercial performance. EE’s latest financials are up for the second quarter of 2017, the period up to the end of September. They show revenue of £1.3bn, up from £1.3bn in the same quarter in 2016. Not to mention a 16% growth in EBITDA to £326m. Revenue growth of 4% is an extraordinary achievement in this category and makes it one of the few network brands in Europe to do this.

EE isn’t simply a successful mobile operator – it’s a power brand for our digital lives. Released from the orthodoxies of the mobile category through a new brand, EE has been able to establish the importance, value and, yes, magic of the network. By celebrating that network and the tangible things it enables you to do, EE has built an extraordinary brand and robust business. One that creates value from its core activities but has the bandwidth, literally, to move into adjacent activities from TV services to broadband.

There are two additional and less conventional metrics that suggest the scale and role of EE five years into its life.

Last October, Apple launched the third generation of its Apple Watch. Freed from the phone, it has its own 4G connectivity that only works on EE. Meanwhile, the UK government has selected EE to create and deliver the world’s first 4G Emergency Services Network, so the people we all depend on now depend on EE.

We are used to stories of incredible growth and value creation over frighteningly short periods of time when it comes to the tech brands from the West Coast. But EE is a British success story. A disruptor in the truest sense, it brought a better product to the mobile category, built on a better brand and powered by better advertising. And it won, and continues to win, while creating value for all those it serves.

Not bad for a five-year-old.

Is Marc Pritchard right to say that agencies should strip away anything that doesn't add to creative output?

BT chooses Karmarama as second agency on its digital account