The Economist and marketing agency Sense developed a new positioning for the news brand that changed perceptions and garnered strong results.

The authoritative weekly magazine The Economist inspires great loyalty among its readers. Average subscriber life is close to a decade and many subscribers remain loyal for life. However, many non-readers have a misconception of the content or a lack of awareness of the title.

To keep growing, The Economist wanted to introduce the brand to new audiences by encouraging a re-evaluation of everything people thought they knew about it.

"Our internal research showed that the kind of person who is attracted to The Economist has an open mind and is not afraid to be challenged. We call these people the ‘globally curious,’" says Marina Haydn, senior vice president, circulation and retail marketing at The Economist.

"If we could develop an idea which would screen for these types of people, we would be left with the perfect audience to introduce the brand to," explains Sally McLaren, board director at Sense, which collaborates with The Economist on its experiential marketing programmes.

The question was how to do it?

Central to The Economist’s mission is keeping its readers abreast of the future trends that will be shaping the world tomorrow. These aren’t always pretty, and so were perfect for Sense’s purposes. 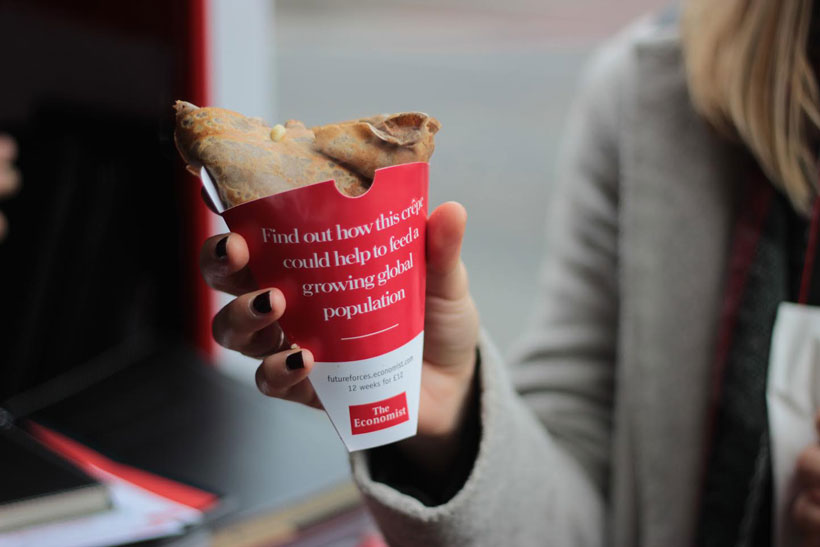 "If we could bring the public a challenging taste of the future today," says McLaren, "we would have the perfect vehicle with which to screen out the squeamish and flatter the curious, opening up a subscription conversation."

This was the thinking behind the strategy called "Discomfort Future". The first activity under this umbrella was an ice cream stand that at first glance looked like The Economist was simply giving free treats to people. However, if people looked closely, they would see that the flavours they were tucking into had more bite than it first appeared.

"Our ice-cream was protein-enriched with locusts, meal worms and grasshoppers, allowing people to experience what might be the food of the next century – a subject straight out of our pages," explains Haydn.

The message was simple: "Not grossed out? Then you might be the kind of person who can handle The Economist."

The insect concept also had a winter version, whereby the creepy-crawlies served as a crunch topping for a series of crepes. The hook-and-reveal approach was the same, opening up a sales opportunity.

Other activations included "Waste Food", where The Economist served smoothies made from food that supermarkets had rejected, highlighting the food waste issue. There was also H #2O, a coffee trike that appeared to be getting its water supply directly from a portaloo, referencing new technology that can turn raw sewage into drinkable water. Again each concept stemmed from a topic covered by The Economist.

"The campaign brings our quality journalism to life while enabling passers-by to not only experience our content, but also to learn that we are a brand that advocates positive change," says Haydn. "Through these types of activations, we’re offering people something they can take control of in their everyday life. We illustrate a problem normally expressed in hard data – for example, the fact that 30% of good food is thrown away. Instead of presenting the challenge through data, we are offering people a solution so it ends up being a positive experience."

Starting out as a one-day test activity in one London location in 2014, initial strong results led The Economist to expand the campaign across the capital on a regular basis. It proved such a success that it was rolled out globally. Within a year, the campaign landed in Europe touching Denmark, Germany, Ireland and Holland. A few months later it reached Brazil, the USA, Australia, South Africa, Singapore and China, and it is still actively attracting subscribers and growing brand awareness. 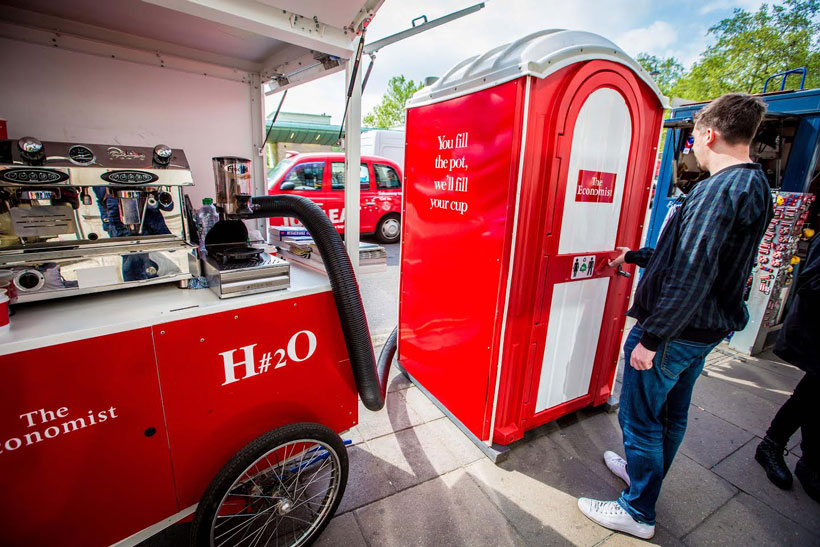 To date, over 30,000 subscriptions have been generated through this activity worldwide.

What’s more, there has been a strong shift in brand perception. In the UK, those people who find the brand interesting has risen 24%, while a third less people find The Economist’s content boring and dry, according to EMR research.

People who engaged with these experiential activations are starting a new relationship with The Economist and with a completely different mind-set: challenged, engaged, committed and willing to stay for longer.

"Discomfort Future is a powerful campaign strategy that’s helping drive the growth and success of The Economist," says Haydn. "Many of the people we interact with, particularly outside of the UK, have low levels of brand familiarity and this kind of experiential activity helps them to understand us and improves brand perception. We have seen a clear, positive impact and it has helped to bring our brand to life."

The one medium you can create, captivate and control

Find out how Guinness created a VR experience