Created by 72andSunny Amsterdam, the global brand campaign first started in June in the US and kicks off in the UK tomorrow (26 August) with a 40-second TV commercial.

"Fill your cart with colour" is aimed at highlighting the varied selection of products available in eBay, from baking to cycling, music to fashion.

"The impetus for this global rebrand came from the very top. From Devin Wenig, our chief executive," Gareth Jones, eBay’s senior director of marketing, said.

Before this, eBay's brand campaigns were run on a local basis across its different markets. "What we started to get a better grasp of towards the end of last year is that there were a number of consistent consumer truths that glued all our global marketplaces together," Jones explained.

This campaign is based on the premise that possessions are a way of expressing personality. In the UK, a survey of 1,500 shoppers by eBay found that two in five Brits express themselves through the items they buy.

After the UK, the campaign will roll out in Germany, France, Italy, Spain, and Australia.

The campaign which ran in the US:

Each local execution of the global campaign will feature that market's influencers. In the UK, the influencers featured in the TV ad are: patissier and chef Eric Lanlard, endurance cyclist Laura Scott, and musician and sneaker fanatic James Massiah.

"There will be more influencers featured in the executions across social platforms including Snapchat and Facebook," Jones said. "The stories of these influencers will also be told in more depth in 30-second video on that will run on social."

"Fill your cart with colour" will run across TV, radio, cinema, digital and social. The campaign will be integrated into radio content on Capital FM, through its existing sponsorship, as well as out-of-home with digital display and static billboards around the country.

72andSunny Amsterdam's creative directorsMatt Firth and Felicitas Olschewski have created all the broadcast material for the campaign, while MediaCom is managing media-buying and planning.

There is also a spot, created in partnership with Channel 4 that will go live in the middle of Great British Bake Off's debut on Channel 4 on 29 August.

"This is probably the fastest shoot ever. We're shooting it tomorrow, editing it over the weekend to play on Tuesday evening," Jones said. 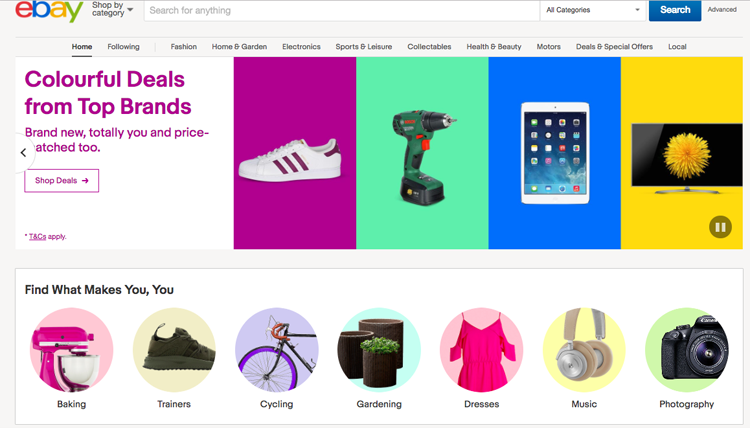 The new brand position translates onto the site itself with an enhanced personalised shopping experience that AI and machine-learning technology to provide shoppers with tailored recommendations across all categories with each new site visit.

"The recommendations are based on first, second and third-party data and will reflect consumer behaviour both on and off the site. The homepage is tailored to each person and themed to the campaign, as are the recommendations," Jones explained.

Managed by digital agency, Feed, this granular level of personalisation will carry on across display, CRM and email marketing. "Emails, for example, are dynamically rendered at the point of opening. So the email you see won't be the same as the one I see. And if you open it a few days later, it may not be the same as when it first landed in your inbox," Jones said. "It's the science of marketing coupled with the magic of engagement."