The best political slogans capture the zeitgeist and influence campaigns. By the chief executive and founder of London Advertising.

Everyone has always loved a good slogan or catch phrase, from Bart Simpson to Lenin. Often they are consigned almost immediately to the waste bin of history but others hit the zeitgeist tuning fork in just the right place and their reverberations have a long reach.

They can motivate us, change our behaviour and form our opinions. The good ones manage to endure for years, hanging around in the public consciousness long after they have achieved their original goal.

"Keep calm and carry on" still has a currency,  even 70 years on from the war that inspired it, although oddly enough it was never actually used at the time it was written.

Our addiction to short snappy phrases is catnip of course for our politicians who are always looking to compress the mountain of issues involved in running a country into tasty bite-sized chunks to feed to the electorate.

Most of us will not be wading through all the small print of the election manifestos, looking up Theresa May on Wikipedia or reading every single tweet from Jeremy Corbyn as we apparently each spend only four minutes a week bothering to "tune in" to politics.

So, getting your message across in a punchy slogan can play an important part in winning votes. It doesn’t matter if it is delivered through advertising, conference speeches or TV debates or a Tweet, as long as it hits the mark and gets people to buy in to the idea.

Back in the late 70s, the Tories’ "Labour isn’t working" poster (below) struck a chord, both with me personally and the millions of others who acted upon it, and is regarded as the pivotal moment in that election campaign. 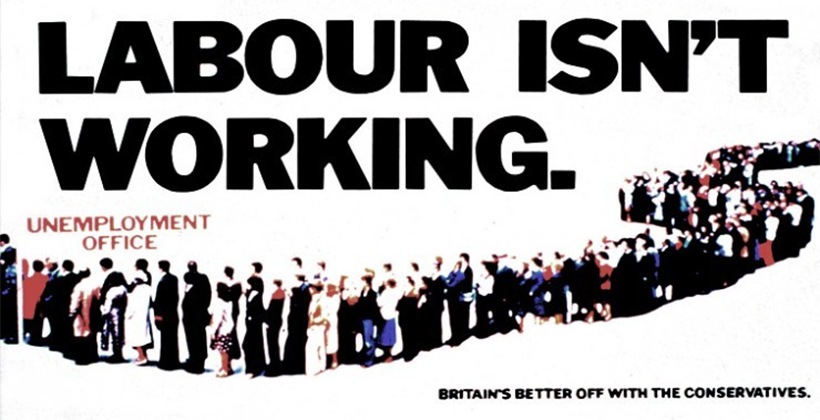 It was visceral and tapped into the national mood of dissatisfaction, which was nicely summed up by a pundit as the "Winter of discontent", and it managed to encapsulate it all in just three words – you don’t even need four seconds to appreciate that, never mind four minutes.

It may be stating the obvious to point out that brevity is essential but it is surprising how many fall at this initial hurdle.

The prime minister is also being ridiculed for her latest slogan "Strong, stable leadership." In its favour is the fact that it does pass the comprehensibility and brevity test.

North Korea’s Kim Jong Un, created the national slogan "Let the strong wind of fish farming blow across the country." Similarly long-winded was "Change that works for you. Building a fairer Britain." It was the Liberal Democrat’s choice for the 2010 election and, by introducing a full stop, brilliantly drew attention to the fact that it was too long.

As an added bonus, the awkward pause in the middle gave the impression of being in two minds.

Vagueness is of course the enemy of the political message. A slogan needs to have clarity so that it is comprehensible to everyone not just the small group of people who dreamt it up. What seems to make sense to the converted can just be meaningless to the voter. UK political history is lettered with such attempts:

Even the other month, the Conservatives tripped up with Theresa May’s "Red, white and blue Brexit", which left people understandably baffled. As one wit observed, red white and blue are also the three colours of the French flag.

The prime minister is also being ridiculed for her latest slogan "Strong, stable leadership." In its favour is the fact that it does pass the comprehensibility and brevity test. We all know what she means and being three words long it can be slipped into the answer to almost any question.

For my money, despite the weekend polls, I believe that the Conservatives will win a three figure majority in June largely due to the hard work this slogan will do over the next week or so. It frames the voters' choice when counter-pointed with the alleged prospect of "Corbyn chaos."

The reason it has become fodder for satirical comedy is the fact that it is repeated with monotonous and robotic regularity. Yet, in terms of reaching the majority of people who are hardly touched by any form of political discourse, you need this relentless single-mindedness to cut-through.

No surprise then that politicians are still chasing slogans. In fact they may even be more relevant now to slice through the fog of fake news and social media.

Political slogans have a long history and occasionally are able to span centuries. "Liberte, equalite, egalite" for example has truly stood  the test of time. Tracing its path originally from the French Revolution, it has now become the country’s national motto.

Like all good ad campaign straplines, the good ones are almost impossible to forget and simply embed themselves into the national consciousness. No surprise then that politicians are still chasing slogans. In fact they may even be more relevant now to slice through the fog of fake news and social media.

We have had "Take back control" from the EU referendum leave campaign and France has just seen "Choisir la France" from Le Pen go head to head with Macron’s "Ensemble la France. Perhaps with an eco-conscious view to conserving resources, there has also been some recycling. Labour has dusted off Tony Blair’s "For the many not the few", and last year Nicola Sturgeon up-cycled a vintage Thatcher: "Don’t just hope for a better life, vote for one", replacing "Life" with "Scotland".

Incredibly, the US president has already pre-ordered his next slogan for 2020. "Keep America great" will be the sequel to the 2016 election’s "Make America great again." While I admire Trump’s confidence, the sobering fact for all politicians is that the final arbiter is always the general public.

Michael Moszynski is the chief executive and founder of London Advertising. He ran the Conservative General Election campaign in 2005, and a number of presidential campaigns across the globe.

Reputations matter, so let's tot up the scorecard on a few