Amy Williams, founder of the ethical adtech company, Good Loop, shares her top five tips on how start-ups can thrive at Cannes.

If advertising were global politics, the Cannes Lions Festival of Creativity would be the G8 Summit. It’s a gathering of successful, affluent and influential industry leaders and so to me, as the founder of an early stage advertising start-up, becoming the ninth member of the summit seemed frankly more feasible than attending Cannes. I assumed that it was a festival about big ideas and even bigger yachts, and so it never even occurred to me that my fledgling business could find opportunity there.

However, this year I was awarded a free ticket through the GoDaddy Scholarship for Women in Tech in association with Campaign and so I had a chance to peek behind the curtain. What I discovered was an incredibly supportive and open-minded environment where innovation is embraced as a tool to strengthen and amplify the creativity at the heart of our industry.

So this article is my attempt at giving the ‘start-up perspective’ on Cannes. For anyone out there who can’t stay at the villa their agency rented and who doesn’t have Keith Weed on speed dial, but who still wants the opportunity to learn, discuss and share with their peers at Cannes, here are my top five tips:

The first thing I learned is that the best connections you make at Cannes are over a cold beer on the beach. So don’t stress about getting the best, most expensive festival pass or ensuring you’re at every single networking event. I met several people who had squashed themselves into a cheap easyJet seat, found a basic Airbnb on the outskirts of town and had an incredible Cannes experience. Who you speak to is the most important thing, so spend less time worrying about your sea view and more time planning a ‘hit list’ of potential customers who you might accidentally-on-purpose bump into at the bar.

Crucially, Cannes isn’t a technology festival; its culture is deeply rooted in creativity.

While at the festival, I met with Rob Dembitz, global head of innovation at Cannes Lions, and he explained "for us, it’s all about the application of technology to drive great creative work." He admitted: "One of the biggest challenges we face is educating start-ups that whilst they are an integral part, this is not a start-up conference so they need to come to the festival with a desire to speak the language of creativity, not assume everyone wants to hear a tech pitch." Fostering this balance between technology and creativity is what fuelled the launch of the Innovation Lion award category – an award specifically designed to celebrate the creativity that’s enabled by new, exciting technology.

So it’s clear that there is huge opportunity at Cannes for entrepreneurs who see the creative potential within tech and who understand how technology will keep the more "traditional" fields of creativity alive in the future. 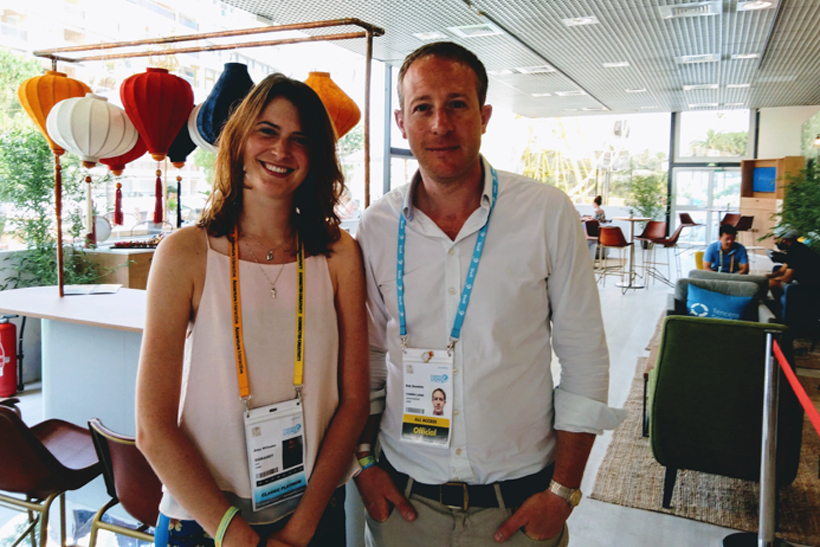 Embrace the future of creativity 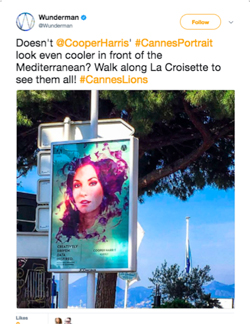 I was lucky enough to meet with one such entrepreneur, Cooper Harris, who is the founder and chief executive of a data-driven payments start-up called Klickly. She said that the Innovation Lions was by far the most relevant part of the festival for them. Cooper was also moderating the discovery stage this year and found it to be a hub of innovation.  She explains: "The stage covered AI, voice and bot technology, AR/VR/MR, location tech and IoT. The sold-out crowds spilling onto the floor of our stage showed me that it was the creatives who were wondering how they would remain relevant in the age of technology."

Cooper is a seasoned expert in making the most of her Cannes experience. This year, Adobe and Wunderman selected her as one of their "Data Driven; Creatively Inspired" thought-leaders at Cannes Lions. They created data-driven portraits that hung on billboards along the boulevard and acted as a true testament to the many ways that the future of innovation can inspire creativity.

Make the most of the opportunities on offer

Dembitz and his team work hard to create accessible, useful opportunities for early-stage businesses at Cannes. They run a week-long start-up Academy which is a carefully curated series of events and learning experiences in collaboration with R/GA. They also have a start-up programme, which takes place during Lions Innovation for two days and offers a more affordable route into the festival and also offers things like co-working space and networking.

"We find that many companies then want to ramp up their presence each year," Dembitz explains. "This year that included former Start-up Academy founders speaking on stage, mentoring and even sponsoring".

I also had the chance to chat to Katie Massie-Taylor, founder of mush, an online social platform that enables mothers to meet other mothers. "Cannes was a great experience for us" she said. "We got our first brand partnership with Johnson & Johnson through a marketing exec seeing our pitch on the YouTube stage!"

The final lesson I’ve learned through being at the festival and also through chatting to other founders like Katie and Cooper, is that the best way to extract value from the event is to immerse yourself in it. Cannes is an opportunity to absorb knowledge from the best and brightest in the industry so go to the talks, engage in the debates and listen to what’s being said. For many start-ups Cannes attendees are potential clients, so being able to listen to the language they use, the issues they care about and the values they hold, that gives you a huge competitive advantage when you’re trying to connect with them.

People don’t come to Cannes to learn about your innovative deep-tech full-stack cross-platform solution – they come to meet people. They come to build connections, share knowledge and learn from each other. So get out of pitching mode, have a glass of rosé and soak it all in.

You might not miss Flash, but today's internet wouldn't be here without it

Flash and burn: web browser plug-in to disappear by 2020

'Stop viewing other women as competition'

Diversity is a creative advantage

Cannes is a golden opportunity

Can the Festival of Creativity move us into a new era of activism?