You didn't actually think it was real, did you?

A PSA that looks decades old warning people to "remember the cranberry sauce, but forget the marijuana" because it will throw you into a "murderous craze" is currently doing the rounds on social media.

The spot, which appears to be Ad Council approved, may slide into your Instagram DMs via a popular meme account over the Thanksgiving holidays after surfaced on Reddit.

But you can rest assured that it is indeed fake. The Ad Council has confirmed it cannot be verified. The PSA source is not clear. 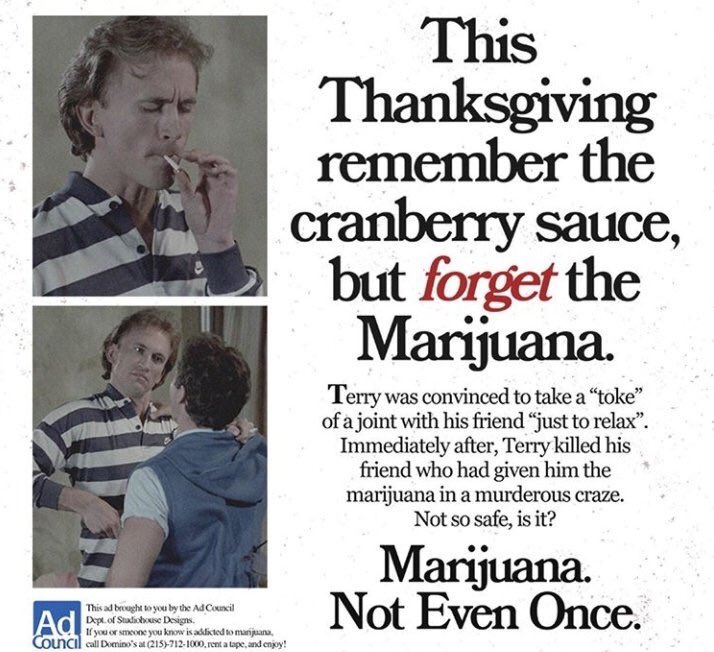 Part of the ropey copy reads: "This Thanksgiving remember the cranberry sauce, but forget the Marijuana.

"Terry was convinced to take a ‘toke’ or a joint with his friend ‘just to relax’. Immediately after, Terry killed his friend who had given him the marijuana in a murderous craze. Not so safe, is it?

"Marijuana. Not Even Once."

If you need further proof this PSA's a dud, check the "Ad Council" fine print that instructs you to "order Domino's, rent a tape and enjoy" if you're high.

Reddit users on which brands they're loyal to and why

Campaign US selects 5 favorite PSAs of 2019