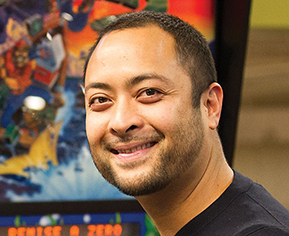 Remember Napster? Raf Rivilla does–and he’s the reason you do, too.

The platform’s 1997 launch earned Rivilla, then at Mediasmith, and his team OMMA’s Best Product Launch and Best Campaign of the Year, the first of many pioneering executions in his career. And he was only two years in.

After Mediasmith, Rivilla joined BVK, in Atlanta, where he led a small team that created a media attribution model, which helped to grow agency media billings from $20 million to $100 million. Following his heart to Cleveland in 2014, today he is now leading another transformation: growing 80-year-old Marcus Thomas into a leader in media strategy and execution.

Since his arrival at Marcus Thomas, the company has grown its media team from six to 14 professionals, with an annual media spend from $12 million to over $50 million in just five years. Rivilla saw the rise of search engine marketing during year his first year at the agency, so he started auditing each client’s media mix to incorporate SEM. He won a large car insurance client in his first year, primarily through SEM, spending millions a month on search and allowing him to create a strong case study for new business. He increased the agency’s capabilities in direct response marketing and ROI attribution for both website conversions and in-store purchase attribution. He also anticipated the need to build early in-house capabilities for programmatic media trading and grew programmatic revenue by three times in one year, resulting in higher ROI for clients. And he created a summer media course for the entire agency, allowing account service and other front-line personnel to sell media services to clients and prospects.

His biggest passion, though, is the Rowley Inn, a 1906 bar in Cleveland’s Tremont neighborhood that he purchased with his husband. Since the couple renovated it, the Inn has been featured on Cleveland.com, The Plain Dealer, Cleveland Scene, Yelp, numerous food blogs, and won a spot on Thrillist’s Best Places to Drink in Cleveland in 2017. Rivilla’s been great for the bottom line there, too–under his watchful eye, sales increased over 1000 percent in just one year.