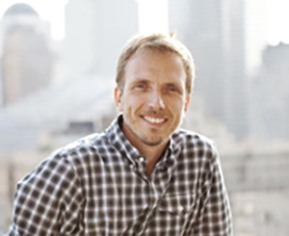 Petter Weslund has been leading the creative side of B-Reel as Chief Creative Officer since the global creative agency first opened its doors in 1999. In 2008, he moved to NYC to launch the east coast outpost before making his way out to LA. Westlund is described as the original Swiss Army Knife of digital production. His creative direction, tech savvy and aesthetic has been paramount to B-Reel’s success for brands including Gorillaz, Google, Nixon, MTV, Nike, American Express and H&M. Under Westlund’s leadership, B-Reel has created industry-shaping work with an eye towards using technology create beautiful experiences for brands.

Westlund claims he barely graduated high school, instead doing graffiti in Stockholm. When it came time to get a grown-up job, Westlund looked to the emerging New Media market. He lucked into a multimedia program at university, then took jobs coding, designing, and doing whatever was needed in service of the dotcom years. He co-founded B-Reel in 1999 with four friends who came up with the business idea in a bar.

The boutique agency has grown into a creative heavy-hitter with offices across the globe (NY, LA, Berlin, London, Barcelona, Stockholm). Westlund’s work has been recognized across Cannes, The One Show, Webby Awards, the Emmy’s, the Guinness Book of World Records, and more recently landed B-Reel as one of Fast Company’s Most Innovative Companies.

His other career highlights include working with his team to develop one of the world’s first interactive music videos nearly 10 years ago, with Arcade Fire’s "The Wilderness Downtown," as well as re-imagined how to launch a new album for Gorillaz. The strategy was to create a completely new digital platform, reinventing the traditional album launch by putting on a virtual house party with unparalleled access to the band and live listening events that combined the real world, AR, VR and 360-degree elements.