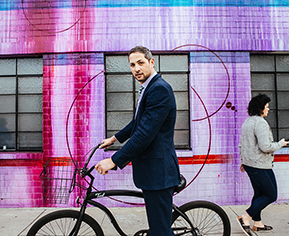 Tool of North America Managing Partner Dustin Callif is all about firsts.

Callif’s career began in in 1998 at Digital Entertainment Network, where he produced the web’s first video-based advertising for brands like Pepsi and Ford and pioneered web-based original content with Hollywood talent like David Cronenberg, Larry Gelbart and Tracey Ullman. Next, at Spacedog, he helped Carl’s Jr. and Hardee’s become some of the first companies to run a mobile UGC campaign, with "Burger Slayer." He guided Qantas Airways through their first e-commerce platform in the US market, leading to double-digit growth of online sales.

Then, in 2009, he moved to Tool as the first head of their digital division, long before other production competitors expanded beyond traditional live-action. Today, he co-leads both the day-to-day management and long-term vision and growth of the company and is responsible for founding Tool’s Innovation Group, which formalized dedicated divisions for AR and VR, experiential, AI and live-streaming. Under Callif’s leadership, the Innovation team has grown to twenty people and increased revenue 33 percent year over year. They have worked with Ford to launch a VR/AR platform; Toyota and Saatchi LA to produce, using AI, their most effective online ads ever run on Facebook; and Macallan to transform tasting events into immersive AR pop-ups.

He has helped leading agencies and brands find their own firsts: Droga5, with the industry’s first social-media powered game; 72andSunny, with a data/real-time video trailer for Google; Airbnb, with an interactive PR platform; and Ford, with the first dedicated VR/AR platform from an automaker.

Callif has also produced two milestone digital projects for Tool: "Take This Lollipop" and "Clouds Over Cuba." The former, a personalized horror film that uses Facebook data, became the fastest growing Facebook app of all time and won a Daytime Emmy for New Approaches. "Clouds Over Cuba," an interactive documentary created for the 50th anniversary of the Cuban Missile Crisis, won the News & Documentary Emmy for New Approaches.

An active presence in the interactive advertising and marketing industry, Callif is a frequent conference speaker and serves as a judge for many awards, including the Emmys. The winner of over 500 accolades, including the Palme d’Or at the 2016 Cannes Lions Festival, he holds membership in the International Academy of Digital Arts & Sciences and has had eight projects featured in the permanent collection of The Museum of Modern Art.