From Africa to Beverly Hills, a bold gambit for WATERisLIFE bumps up against the realities of the art market

A little over two years ago, Frank Cartagena and Menno Kluin were in Africa shooting one of their many award-winning campaigns for WATERisLIFE, the charity that provides clean water and sanitation to villages in need, when they spotted the inspiration for their next big endeavor: Parisian street artist JR’s "Women are Heroes" series in Kibera, Kenya.

The art "installation," for lack of a better word, comprised more than 21,500 square feet of rooftops in Africa’s largest slum. In 2009, JR adorned giant vinyl tarps with arresting black-and-white photographs of women from the village, then placed them across the roofs. At the time, the project received widespread coverage from mainstream and art media, including the New York Times and The Guardian. Four years later, the project was all but forgotten, and had fallen into disrepair.

Like the rest of the world once had, Cartagena and Kluin found themselves mesmerized by JR’s work. It stayed with them, and soon gave them their next idea to raise money for WATERisLIFE. They would take the presumably valuable art and sell it.

"These are people who have nothing, and their solution was right over their heads and they didn’t even know it," said Cartagena, who is now creative director at Deutsch, New York. (Like Kluin, he had been working at DDB, New York, when he first spotted "Women are Heroes." The two moved to Deutsch last year and brought WATERisLIFE with them.)

To see that the poverty-stricken villagers "were living under art work that in Western society is considered extremely valuable really struck us," said Kluin, executive creative director and head of art and design at Deutsch. 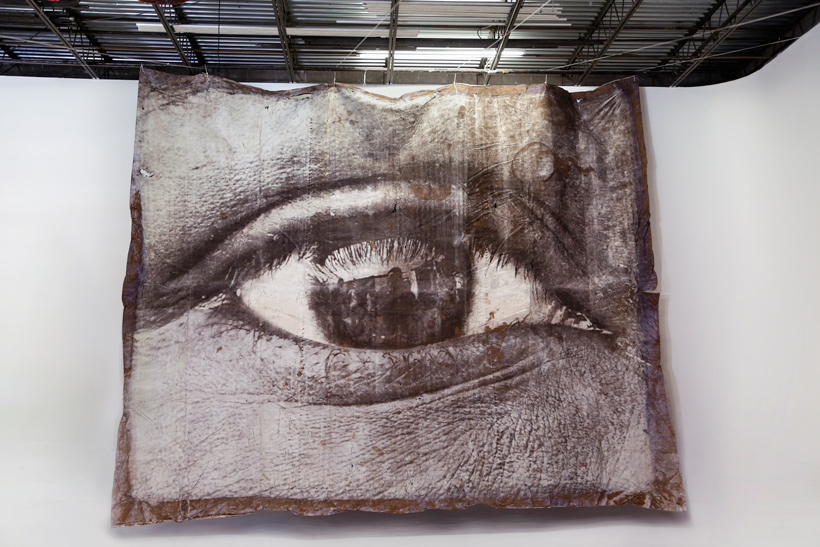 So the team returned to the African village early this year with a skeleton crew, and—working with the permission of the families that lived there and the support of local community leaders—took down the vinyl art pieces and shipped them back to the states to be auctioned at Julien’s Auctions in Beverly Hills. At the time they estimated the art would go for $20,000 to $40,000 a piece.

The result is "Art Heist for Good," a two and half-minute video that tells the dramatic story of how the team appropriated the TED prize winner’s art in order to, as the voiceover says, "take from the poor to give back to the poor."

Unfortunately, the first piece sold in September for $10,000 — far below the estimated sum. "It was a little less than we were hoping for," admitted Kluin. Part of the problem, he suggested, was that the team had failed to include a reserve price. With all the interest in the acclaimed artist’s work, the team didn’t think it would be necessary. "But it was very symbolic as the first sold," he said.

The launch of the campaign today will help stoke interest in the next one, which will be held in Paris in December, the team said. But as a safeguard this time, a reserve of $17,500 has been set in order to help guarantee a greater return. Whether the second buyer will be willing to pay nearly double what the first one did for essentially the same art remains to be seen.

While the video projects the value of all of the JR rooftop work at $400,000, the agency team won’t reveal exactly how many pieces were taken, or how many are in good enough condition to sell. But Kristine Bender, president of WATERisLIFE, said they have "a few" to work with and plan to sell others over the course of the next several months. The organization hopes the campaign will raise at least $100,000 to fund the organization’s community projects next year. "One of the most critical things is getting clean water to the people in Kibera," said Bender.

The money raised will fund, among other things, the installation of a 5,000 gallon-per-day water filter, the building of a permanent community hand-washing station, hygiene education programs, and the repair of broken hand-washing stations and water distribution points.

"We believe these banners have a particular creative value. We are looking to the art community and fans of JR’s incredible work to want to own a piece of his work from the past," she said. "They are not only giving, they are getting something back, so it’s in an investment in doing good."

While JR’s oversized street art is socially conscious and blankets poor communities in cities all over the world, the elusive artist—who is often described as the French "Banksy"—declined the agency’s requests to participate in the project.  (He didn’t respond to our requests for comment, either.) JR has been outspoken in the past in the press about his distaste for commercial projects and prefers to let his art speak for itself. 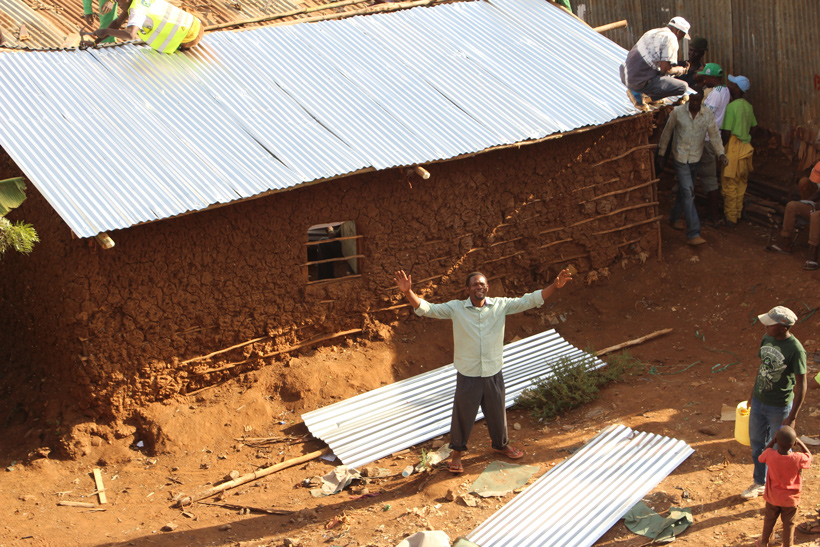 The way the agency and charity organization see it, the project is helping to preserve art that was deteriorating in the harsh African climate and teetering on crumbling roofs. The residents whose homes served as their canvas got brand new corrugated metal roofs in exchange for their trouble. And WATERisLIFE is getting another global attention grabber that raises awareness for the organization and its work. "It’s challenging for non-profits to convey the amazing work that is being done," said Bender. "We’ve got the brightest creative minds working on ways to share our work and invite others to participate it in as well."

"It’s really important for us to completely change directions with each project," said Deutsch creative director Sam Shepherd (another DDB expat) of the creative challenges on the account. "This one definitely has an edge to it. We like that it’s confrontational, edgy, and hopefully it will make people take notice."

And presumably, win awards for the agency. The accolades that the team’s past efforts have received from the WATERisLIFE work — including several Cannes Lions — is an added bonus that the client said only amplifies its awareness message. The advertising community spreads the organization’s message to a larger community than the group’s own, said Bender.  "When they go to Cannes, it gives us additional people to see and participate in our work. We love it."

Why every day is #WorldToiletDay at American Standard

Can a 3-year-old recognize the Target logo?

Four lessons from TOMS' One for One strategy