That's a ludicrous suggestion, Richard Morris argues. Agencies that want to succeed ought to be marching towards the sound of gunfire.

Last week, the esteemed global editor-in-chief of this august journal (I’m laying it on thick because of what’s coming next) asked "Will agencies send badly behaved brands packing?" and queried whether "perhaps DDB should fire VW".

This is, of course, a ludicrous notion – and, in fact, the polar opposite of what any agency that wants to be on the right side of the moral argument should do.

As this might now be the last article I ever get to write for Campaign, I’d best elucidate while there’s still time.

Let’s take Volkswagen. Now, I’m willing to bet there were quite a few folk within that organisation complicit in the latest shenanigans. As someone recently said, installing test defeat software devices into 11 million cars isn’t the work of one chap on a production line with a spanner and a misguided idea about what being helpful might mean.

But VW employs 592,586 people around the world (don’t you love that Germanic precision?), plus countless other folk aligned to the group through dealerships and suppliers. Most of them are innocent of any malfeasance and have worked tirelessly to raise the brand on to the pedestal it has now thrown itself off. 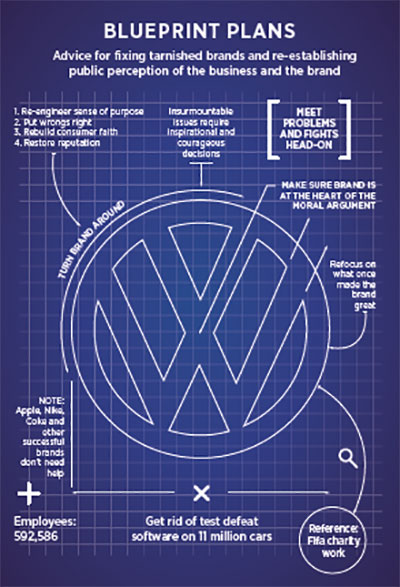 We could look away as VW slips gently towards the (physical and metaphorical) scrapheap. But wouldn’t it be better to work with the brand to re-engineer its sense of purpose, help it put right what has gone wrong and then use our talents to restore the consumer’s faith in VW?

I mentioned to someone the other day that I would like a crack at restoring the fortunes of Fifa. They looked askance. Why on earth would I want to work with that bunch of (allegedly) corrupt, nefarious, disingenuous vipers?

Well, I’m less keen on those people, it’s true. But many other people who work for and with Fifa spend their days helping underprivileged kids in the poorest countries of the world make a better life for themselves. Fifa helps fund schemes including: Goals Haiti, which promotes health and nutrition initiatives; the Chiparamba Breakthrough Sports Academy, which runs health and sanitation programmes in Zambia; and a series of outreach activities in remote communities in southern Peru.

If I can help the good folk at Fifa – and there are many of them – to restore their reputation and do work like this, then I think that’s a positive thing.

Plus, as we scramble on to the moral high ground, one has to ask: where do we draw the line? I suspect the next few months will see a number of charities in the spotlight for overzealous and misguided donation-gathering. Do I want to defend that practice? No, I don’t. Do I want to help those charities rebuild trust and help them cure cancer or heart disease or whatever else they might do? You bet I do.

Not convinced yet? OK – let me try another approach.

It’s easier, more exciting and less dangerous to work on brands or organisations that are in trouble.

When you ask many agency folk what they would like to work on, they name a bevvy of shiny, glamorous brands, famous for their fine judgment and excellent work – the Apples, Nikes and Cokes of this world.

But those companies don’t need you. They are doing very nicely as it is. There’s no challenge. And things have only got to go slightly pear-shaped and everyone’s eyes are going to swivel in one direction.

It’s much more exciting to work on a brand with problems. With seemingly insurmountable issues. Where change is vital. Where dramatic, creative, inspirational and, most of all, courageous decisions need to be taken.

Where the eyes of the world will be on you. Where questions are going to be asked and brilliant answers demanded.

Where putting lipstick on a pig just won’t cut it. Where you need to take the whole thing apart, remove the bad parts and get everyone to refocus on what made the organisation great once but that has clearly been forgotten along the way.

And so much the better if it’s a brand with history and fabulous assets, where the many things that made it great are still very much in evidence but masked from view by some bad decisions and poor choices.

If you’re just trying to cover up the dodgy dealings of nefarious crooks, then you have no place in my world. But if you want to actively help the majority of good souls inhabiting most companies put things right, plus do the best work you’ll ever do on the ride of your life, then it’s the problem children where the glory lies.

My advice is to listen for the sound of gunfire. Then march towards it.

Richard Morris is a partner at Whistlejacket London. He spent 21 years working at DDB, most recently as the regional director for Europe

Can trust in advertising be restored?

Has VW's brand heritage just gone up in smoke?