But not on the streets of Harlem.

She was raped in her bed, in her bedroom, in her dormitory, in her university.

The place where she should have been safer than anywhere else.

She was a freshman art student at Columbia University.

Of course she reported the rape to the university authorities.

Two other students reported it with her.

But the university authorities didn’t do anything.

So she reported the rape to the local police.

But the police didn’t do anything either.

At American colleges, cases of rape are usually treated as high spirits amongst young men.

Especially if the young men are in a fraternity or on the college football team.

The view is, it isn’t really rape as such.

Not in a nasty way.

It was probably just some drunken partying that got out of hand.

This stuff happens at college, get over it.

But Emma Sulkowicz didn’t want to get over it.

She tried for two years to get something done, but the university ignored her.

So she decided to get their attention.

She decided to make it her final art project.

The piece would be called CARRY THAT WEIGHT.

Until she graduated she would carry her mattress with her wherever she went.

To classes, to the cafeteria, to the shops, to the bathroom.

Dragging it through the halls and across campus, twenty-four seven.

Whenever anyone asked her what she was doing, she’d tell them.

The mattress was the place she was raped.

The mattress symbolised the emotional weight she must carry around for the rest of her life.

The mattress symbolised the way the university ignored the rape as if it was her problem, not theirs.

And soon every young woman on campus wanted to join in.

Wherever she went there was a crowd of young women wanting to help her carry the mattress.

And the art piece grew to be a website, with dozens of young women signing up to participate.

And then an event, a gathering of hundreds of young women bringing their own mattresses.

The event was called: CARRYING THE WEIGHT TOGETHER.

The call-to-action said "No one should carry this weight alone as we are all affected by sexual violence and rape culture at our university".

And like any large, controversial gathering it quickly got picked up by the news media: the papers, magazines, Internet, TV stations.

Not just across New York State, but across America.

Which means Columbia University is now getting a nationwide reputation for having a rape culture.

And parents will avoid sending their daughters to the college with a reputation for a rape culture.

And, given that half the students at Columbia are female, that will jeopardise fifty percent of its entire income.

And that is when you get the attention of the university authorities.

That is when the board of governors steps in.

Not for moral reasons.

That is when you make them realise you’re not just students, you’re customers.

Which is really what the art piece is all about: the art of predatory thinking. 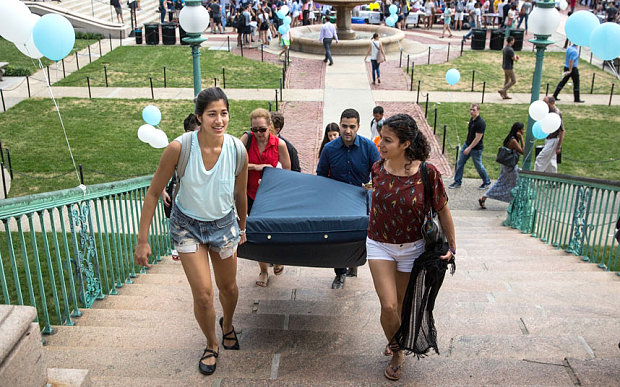