In 1957 Dove soap started advertising for the first time. They ran a press ad with a woman luxuriating in a bathful of bubbles. The headline said HEAD OVER HEELS IN DOVE.

The copy had the woman saying "Dove makes me feel velvety, all soft and silky smooth. Just the most pampered, the most spoiled, girliest girl in the world".

And all they cared about was what men thought of them.

In 1971, Dove ran an ad with a visual of a woman at a party nervously watching her husband talking to a younger woman.

The copy said "Somewhere between the vacuum cleaner and the kitchen sink you got older, and it shows.

But you can still help your skin look younger with Dove".

Dove was always sold as a way for women to make themselves more attractive to men.

Because that was the way all soaps were sold to all women.

In fact, what made Dove different from other soaps was that it was 25 per cent moisturising cream.

Around 1990, the client noticed Dove’s patent was about to expire.

He worried about a competitor copying their formula.

He knew Dove couldn’t carry on just saying the same as everyone else.

That was just Market Growth.

Dove’s unique advantage was about to come to an end.

Their advertising would have to work a lot harder.

Their advertising would have to be about taking Market Share.

Like all good creatives, they researched the product first.

They found Dove wasn’t actually a soap at all.

It had been developed during World War Two to wash the wounds of burn victims.

So unlike soaps, it was pH neutral.

(That meant it had exactly the same alkalinity as human skin.)

Most soaps are really cleansing products.

They strip away the skin’s natural moisture, similar to a household cleanser.

The scientists demonstrated it with strips of yellow litmus paper.

They laid them on bars of soap and every single one turned blue.

Then they laid a strip on Dove and it stayed yellow.

They immediately turned that demonstration into a TV ad.

Ending on the line DOVE WON’T DRY YOUR SKIN LIKE SOAP CAN.

They also ran it as a press ad.

The headline said DO YOU REALLY NEED A HOUSEHOLD CLEANSER TO WASH YOUR FACE?

David Ogilvy was furious, he wrote them a letter saying "Science doesn’t sell to women".

But Nancy and Janet disagreed.

They thought women could handle a rational argument.

It was time for Dove to talk about what made Dove different.

About why you should buy it instead of other soaps.

Nancy and Janet were right.

Dove sales went through the roof.

They were right about Market Share versus Market Growth.

And they were right about treating women as if they had brains. 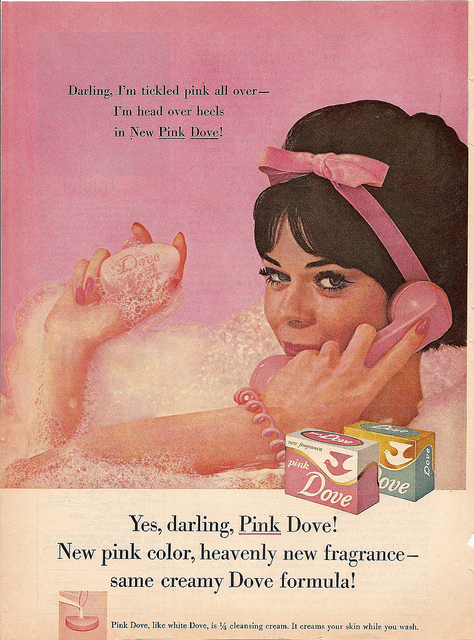