These apps have taken over our homes, but will their new-found popularity continue long after lockdown?

"If you’d told me a month ago I’d make my first video call to a new client from my bed with no shame, I wouldn’t have believed you," Laura Gibson, Cheil UK's head of social, says. "Yet, here we are. This crisis has normalised video messaging and could mean that more people than ever turn to technology in a time of need rather than away from it."

The coronavirus pandemic has not only rocked the advertising industry with the threat of a significant decline in spend, but it has also forced agencies, media owners and marketers to radically change their working patterns. One of the video-chat platforms to have become a household name overnight is Houseparty, which has rocketed to the top of the Apple UK app store chart.

But with increased popularity comes greater scrutiny and, apparently, the threat of sabotage. After a flurry of hacking allegations, Houseparty contested that the rumours were spread by a paid commercial smear campaign to harm the Epic Games app. It is offering a $1m reward for anyone who can provide proof of such a campaign. 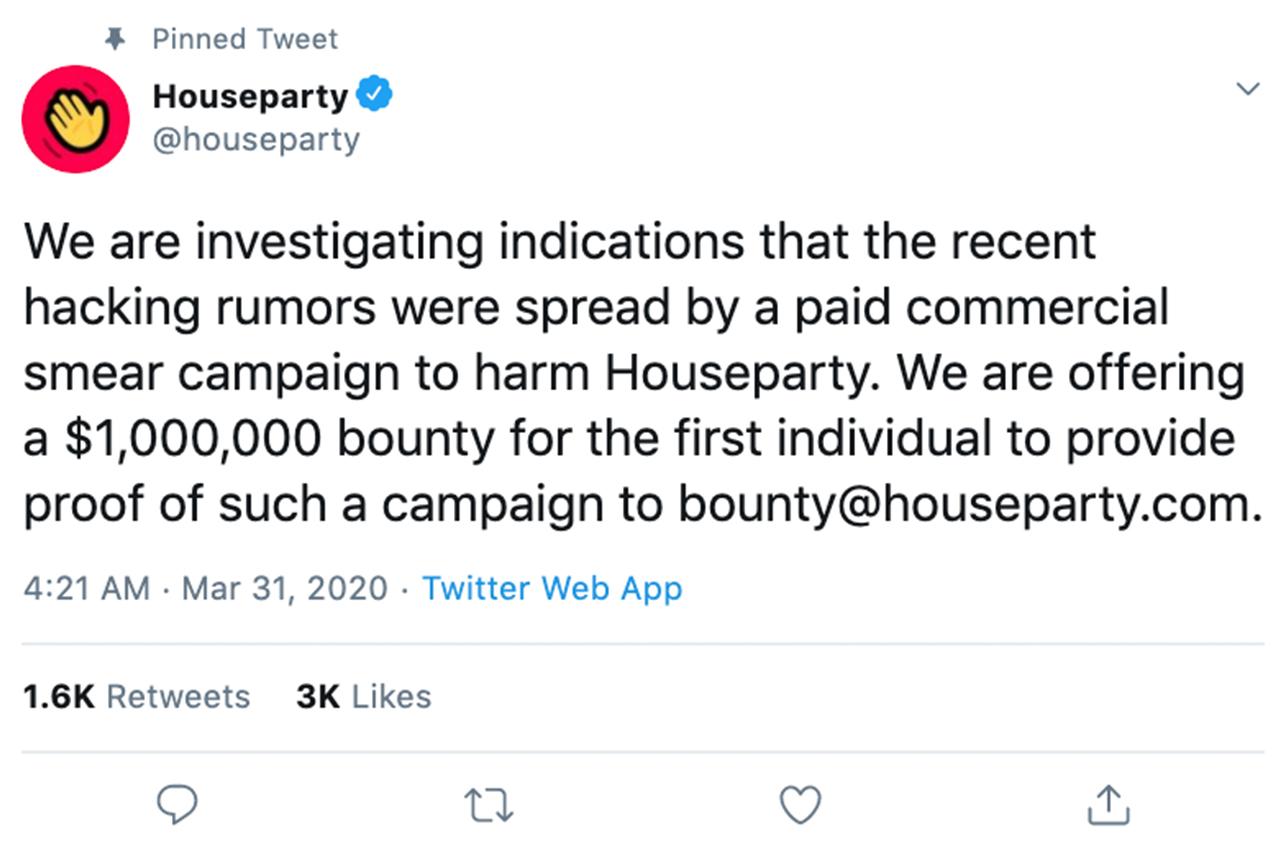 In the spotlight, but it's not new

Houseparty may be in the spotlight now, but social video platforms are nothing new. For example, Twitter-owned Vine was a pioneer of short-form video content before shutting down in 2016, while TikTok was already gaining huge amounts of traction before the pandemic.

Houseparty itself was founded in 2016, but the circumstances of self-isolation and social distancing, coupled with the individualistic nature of these apps, have proven to be the perfect recipe for the app's appeal during this period.

The difference between Houseparty and other video apps is also summed up well by Edward Beard, head of strategy at Digitas: "With the rise of platforms like Houseparty and Zoom, we’re seeing people’s desire to be in relatively closed groups or by invitation. With TikTok, what we’re seeing is a surge of people’s innate creative instincts and desires coming through. It’s a format that lends itself brilliantly to being cooped up in relatively small spaces."

So what can marketers do to understand and stay ahead of this trend? Katie Hunter, social and influencer lead at Karmarama, believes that live video and interactive platforms are here to stay and that brands are going to have to adapt to this new form of communication.

"Production limitations at the moment already mean marketers are having to be smarter about how they create content, and creating for live formats is one way to get around this," she says. "This has opened up possibilities, but will mean more challenges in the longer term as viewers expect more – on more platforms with more experiences."

TikTok is already being considered by marketers, with advertising becoming more visible on the platform in recent months. However, many brands have yet to figure out how to use it well, as Jidé Maduako, chief executive of influencer agency Yoke, explains: "Brands need to be willing to give influencers more creative freedom on TikTok so they can tell their story in a refreshing way."

Houseparty is still considering how best to monetise the platform and it has not ruled out advertising. Its privacy agreement asks users to consent to ads and messages from third parties when they sign up to the service. Sima Sistani, Houseparty’s co-founder and chief executive, told The Verge last year that the company was "really starting to think about ways we can make money by bringing value to our users, not extracting value from them".

Gibson also believes that Houseparty will need to take this approach of adding value with its monetisation plans or risk alienating users: "As a company you need to think about how you can help. How can you use the skills you have to actually make a difference? Then ask yourself why you’re doing it – and if the answer is to further your own agenda, then you need to rethink."

The popularity of Houseparty and TikTok signifies a large appetite for human contact, according to Hunter. For millions of now-disconnected people stuck indoors, the apps offer new ways to connect with friends and family.  If you are too shy to dance on TikTok, Houseparty provides a calmer alternative, offering real-time interaction and a sense of spontaneity through its games.

Beard explains: "What Houseparty does, which smashes through that awkwardness, is give people an activity to do, above and beyond simply chatting via video. It gives people something to coalesce around – and it removes the need for scheduled meeting times complete with invites and URLs. Fancy a chat? See who’s around and hang out.

"So we’ll see these platforms becoming much more popular. But, to be clear, they’ll be substituting physical meetings, and not various forms of online broadcast and content consumption."

The conviction that these apps' popularity will continue long after lockdown is shared by Maduako. He believes that more established social media platforms are becoming dated, while consumers' desire for "more organic content" is growing.

"TikTok and Houseparty will be consumed in a different way from Twitter and Snapchat. The generation growing up using it will make the platform their own," he says.

Perhaps, as Maduako suggests, older social platforms such as Twitter, Instagram and Snapchat will go through what Facebook did: becoming an uncool destination for mums to talk about their pets. Houseparty and TikTok may just take over the reins.

How out-of-home is battling through the Covid-19 crisis