Vicki Maguire and Caroline Pay might be reluctant role models, but they offer a glimpse of a fearless future for advertising, free of uniformity.

Vicki Maguire and Caroline Pay, the joint chief creative officers of Grey London, did not set out to become role models. But one year into their partnership, they are in a unique position as the picture of gender equality at senior levels of advertising has hardly changed. Women occupied just 30.9% of industry C-suite roles in 2017, a marginal increase from the previous year, according to the IPA’s annual diversity census.

Against this backdrop, an all-female creative leadership team at one of the UK’s largest agencies is significant. But Pay makes it clear: "We aren’t here in these jobs because we’re women. We’re here because we’re fucking ambitious and we worked really hard to get here and the timing was right."

Earlier in her career, when she was partnered with Kim Gehrig (now a director at Somesuch) at Mother, Pay says she never wanted to be seen as a token female team. Yet now that she and Maguire are in leadership positions, they acknowledge the mantle of role model that has fallen upon them amid an unequal landscape. They want to change this landscape not just for other women, but also to welcome in a wide range of diverse talent.

Before being appointed to the CCO roles at Grey last year, Maguire and Pay took twisting yet parallel paths to get here. Maguire "got into advertising very late," she says. Her father was a builder and her mother ran a stall at Leicester market. Maguire went into fashion but got fired from several brands including Paul Smith, Vivienne Westwood, Next and French Connection.

While working at Ted Baker, the company shared a floor with ad agency HHCL and Maguire met people such as Dave Buonaguidi (former Crispin Porter & Bogusky London creative chief) and Trevor Robinson (executive creative director of Quiet Storm). "I didn’t even think about how ads got on air and had no background in it, but I could come up with ideas," she recalls. She quit her fashion job and started a new career in advertising.

The lack of gender diversity at agencies jarred with her immediately. "I remember looking around thinking, this is a bit weird. I’d come from fashion with a lot of strong women at the top of their game like Vivienne Westwood, and all of these women with their own names above the door."

Pay also had ambitions in fashion before she fell into advertising. "It appealed to me because I could make things up and get paid for it," she says. "I’m not very academic but I am a big show-off."

But her interview at the Watford Creative Advertising Course almost put her off completely. It was "the hardest day of my entire life," Pay says. "I read the copy test, cried and put it in the bin. But mum and dad got it out of the bin, flattened it out and said you can do this."

No, they don’t hate each other

In a media narrative which often inexplicably casts women as adversaries, the fact that Maguire and Pay’s partnership is rooted in friendship is often overlooked. The duo first crossed paths a decade ago while freelancing at Wieden & Kennedy London. "I thought, ‘She’s got it going on,’" Maguire says of her first impression of Pay. They became friends and would meet for breakfasts or drinks to swap stories about the challenges they faced at work. 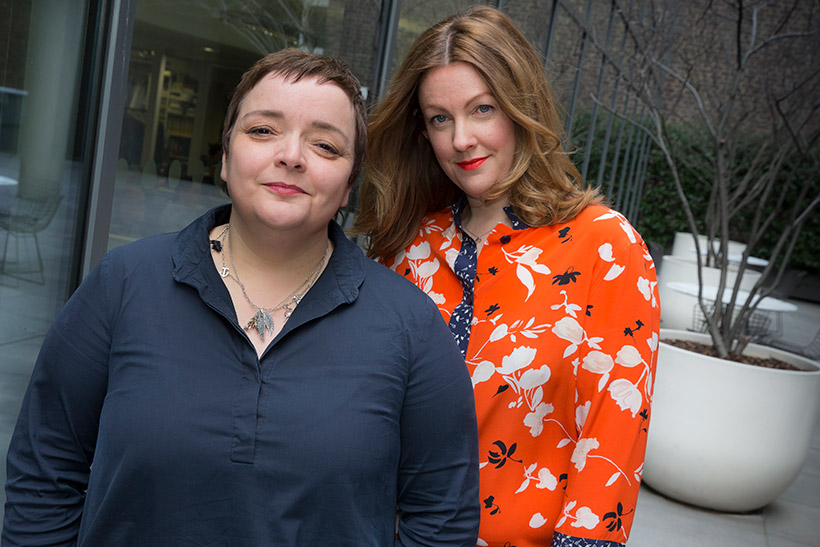 "We would open our hearts and talk through our worries and plans, but also big each other up and remind each other why we’re exceptional. You’d come away feeling like you had brilliant therapy and built your batteries up again," Pay says. "It felt to us that we’d found someone who understood us."

Pay went on to climb the ranks at Bartle Bogle Hegarty London, becoming deputy executive creative director in 2014, while Maguire joined Grey in 2009 and was promoted to ECD in 2015. Each reached a turning point in their careers in 2016.

For Maguire, that came when three of Grey’s most senior staff – Nils Leonard, Lucy Jameson and Natalie Graeme – left to start their own business. Maguire says that was a pivotal moment not just for the agency but also for her personally.

Despite this shakeup, "I looked around and thought, we’ve still got loads to do here," she says. Soon after the trio’s high-profile departure, Maguire helped Grey land Marks & Spencer’s £60m advertising account.

Around the same time, Pay left BBH. When that happened, "I didn’t call my husband or my mum, I called Vick," she says.

"I kept thinking in the back of my mind, ‘What if?’" Maguire says. Pay was interviewing for jobs in America when Maguire and Leo Rayman, the chief executive of Grey London, approached her about the creative leadership job.

"[Maguire] walked in and said, happy New Year, you’re going to be our London CCO. I was like, what about you? And she said we can do it together," Pay says. "It felt like the most tantric ten-year job interview."

After becoming joint creative chiefs, Pay says their ambition was to be "one big two-headed beast" rather than to "divide and conquer." The supportive relationship they built over the years has transferred to their professional partnership.

"I came here for us to become greater than the sum of our parts and be a bulletproof ball of energy that people can look to, challenge and believe in," Pay says.

"Kudos to anyone who wants to do this job on their own," Maguire adds. "It’s never been about that for me. It’s all about partnerships."

Following their experience the pair calls on women to support each other in this industry. "We are a good reciprocal to each other when life is really hard and that’s something that’s really important when supporting other women," Pay says.

"A good lesson for anyone supporting women is to respect personal circumstances," Maguire adds. "Go out of your way to support the other if they have problems at home. Force the other person to talk about it."

Maguire and Pay say that respect for life outside the office is top of mind when shaping their creative department. They believe the ad industry needs a major overhaul in the way it works and have championed more flexibility.

"There’s an entrepreneurial spirit that you can’t pin down between 8:30 and 6:30," Maguire says. "You’ll see a lot of lip service to this, but we have to live it because we respect the people we have in our department – not just the mothers who want to work four days a week but the talented youngsters who want a life."

"Only in this industry would we literally go out, seek diverse people with diverse skills or backgrounds, and then put them in an office, lock the door from 8:30 to 6:30 at night and expect them to perform. It’s ridiculous," Maguire says.

Maguire and Pay are fed up with the uniformity of people in advertising – not just in gender but in age, ethnicity, education level and upbringing. "I got to the point where I was sick to fucking death of seeing the same people from the same backgrounds coming through the agency," Maguire says. "We need fresh talent and thinking and that’s what we’ve been determined to find."

Agencies need to take more risks and look farther afield for new talent, they believe. The duo are in the process of hiring creatives who were previously a R.E. teacher and a multimedia digital artist. They have also recruited a more experienced team who have dubbed themselves "Old Tricks" and want to work in an agency during their twilight years.

These types of hires are only a beginning – there is still much more progress to be made at Grey and throughout advertising. A report released last week on the gender pay gap at Grey’s owner WPP highlights the industry’s deep-rooted issues. There is a median gender pay gap of 14.6% overall at WPP, with a gap of 24.6% across the Grey group.

Maguire and Pay aren’t pretending they can turn the tide alone. But their vision for a more inclusive industry sets an example – here’s hoping it catches on.

"Real creativity can sometimes look nothing like you think it might," Maguire says. "Take a closer look at the talent in front of you."

First Olivia Browne and now Caroline Pay: is something going wrong at Grey?

'We saw an industry that didn't reflect society': How a new internship scheme is shaking up creative agencies