A group of ad creatives provide much-needed respite in event of no deal.

A group of Gravity Road creatives hit the London streets to deploy a series of "In case of hard Brexit break glass" boxes containing emergency items including an Irish passport, a tin of canned meat and a voodoo doll of Boris Johnson.

The group, who embarked on a personal project to stress the dangers of pulling out of the European Union without a deal, opted to use humour for an out-of-home campaign with a serious message.

They created a variety of glass-fronted boxes, each containing an object – including toilet roll, anti-anxiety tablets and a chorizo sausage – and the hashtag #emergencybrexit. They distributed the boxes around Westminster on the second occasion that prime minister Theresa May's deal was voted down, as well as during Saturday's People's Vote march.

"We wanted to do something to bring a bit of wit whilst making a serious a point," Max Lom-Bor, one of the creatives, said. "Everyone’s talking about stockpiling, so we thought we’d turn that into something tangible." 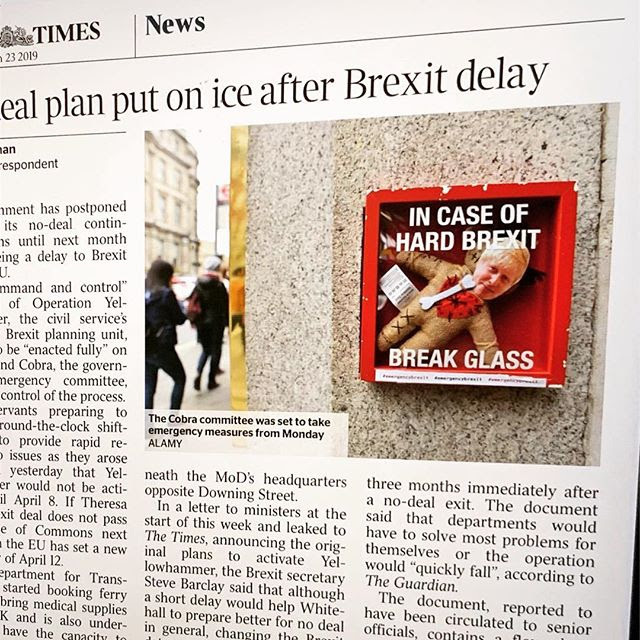 The stunt captured the attention of the media, generating extensive news coverage in The Times (see above), The Huffington Post, The Independent and on news channels across Europe and the US.

"I guess they’re a very visual illustration of the political shit-show right now. People on Instagram were speculating whether this was Banksy, which is flattering, but we’re not in that league yet," Max Lowe, another in the group, said.

The stunt also sparked reactions from the public, many of whom posted pictures on Instagram and Twitter.

Rory Sutherland: it's not logical

Brexit: what's in store for the industry?

Creativity can be UK's Yellow Brick Road after Brexit