One Minute Briefs, the community where creatives crack a brief in one minute, has been criticised for sexism after re-tweeting a number of offensive ads made in response to a brief to create an ad for a 'pearl necklace'.

In light of One Minute Briefs re-posting the offensive ads last Friday, Creative Equals has withdrawn its support of the platform.

The mocked-up ads' straplines included: "There’s nothing more satisfying than blowing your load on a #pearlnecklace"; "Splash out on the one you love"; "Give her a pearl necklace on honeymoon"; and "For the pearl necklace you don’t want" alongside a box of Kleenex. A number of the ads' creators have since apologised for the work, which has subsequently been removed from social media.

Nick Entwistle, the director and founder of the Bank of Creativity and One Minute Briefs, said that as an open platform, One Minute Briefs has sometimes been on the receiving end of criticism for ads submitted or shared by their feed. He said: "99.9% of the time the content shared is positive, potentially award-winning or fun. A very small amount do push the boundaries of subjectivity and can cause offence as we have seen."

He continued: "Sometimes, when I see something I feel is likely to cause offence, I will politely ask the entrant to take their entry down. But I also run this platform by myself and receive thousands of notifications per day. Therefore, I cannot vet every single entry.

"For example, I had retweeted an entry amongst many others on Friday, as I was running between meetings, that was criticised online. That person took his ad down immediately and I am sure has learnt from that for next time." 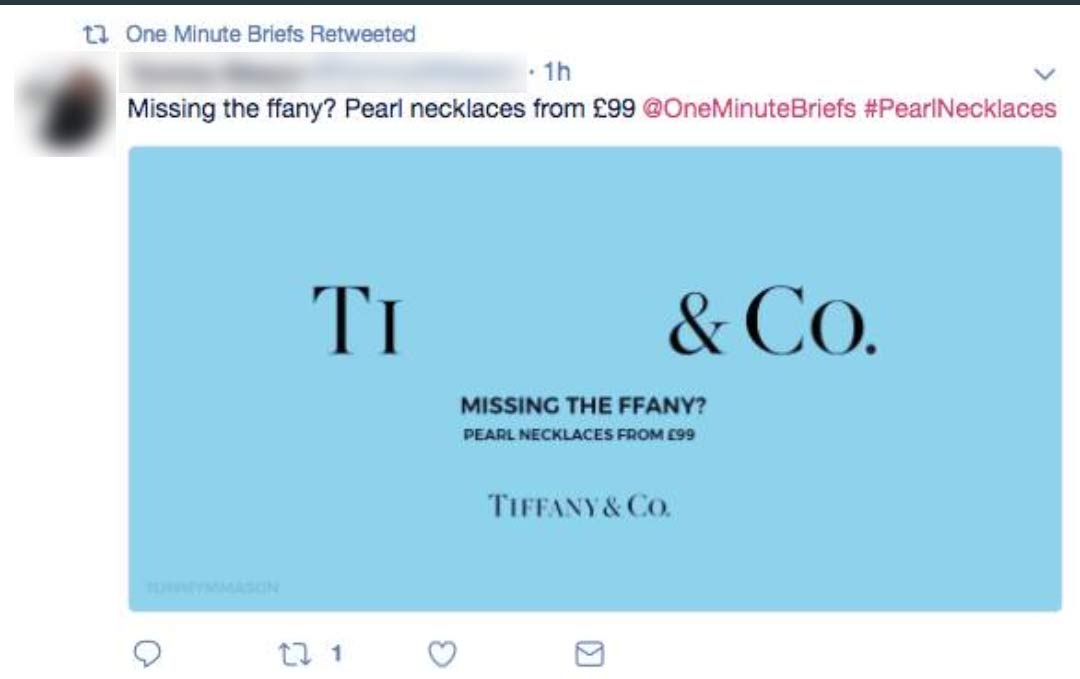 Ali Hanan, the founder and chief executive of Creative Equals, said: "On Friday, after nominating Nick Entwistle for a 'men for equality' list, this hugely offensive work came to light. One Minute Briefs is a powerful platform for creativity, winning awards across the industry and championing many briefs. There clearly is no place for this kind of work in 2018.

"We have withdrawn our support until they establish a clear code of conduct for their community, a zero tolerance policy to work that doesn't meet the ASA's 2018 guidelines around stereotyping and objectification of women, an anti-bullying approach to those when they do speak out, better moderation of the work, and have communicated this manifesto to their 16,000-plus community."

Creative Equals has suggested the group adopt a pinned tweet with, "We believe in a diverse, inclusive and equal world. So should the ads we see here", and place that message at the heart of the platform. The not-for-profit group has also offered to help them establish their guidelines and ways of working to create a "strong future-facing platform".

Hanan added: "We know this work was done by a few when so many do interesting work, but we have found out it's not the first time it's happened. Action needs to happen now. When it does, we can't wait to see a new, evolved community that celebrates and represents the society we want to live in." 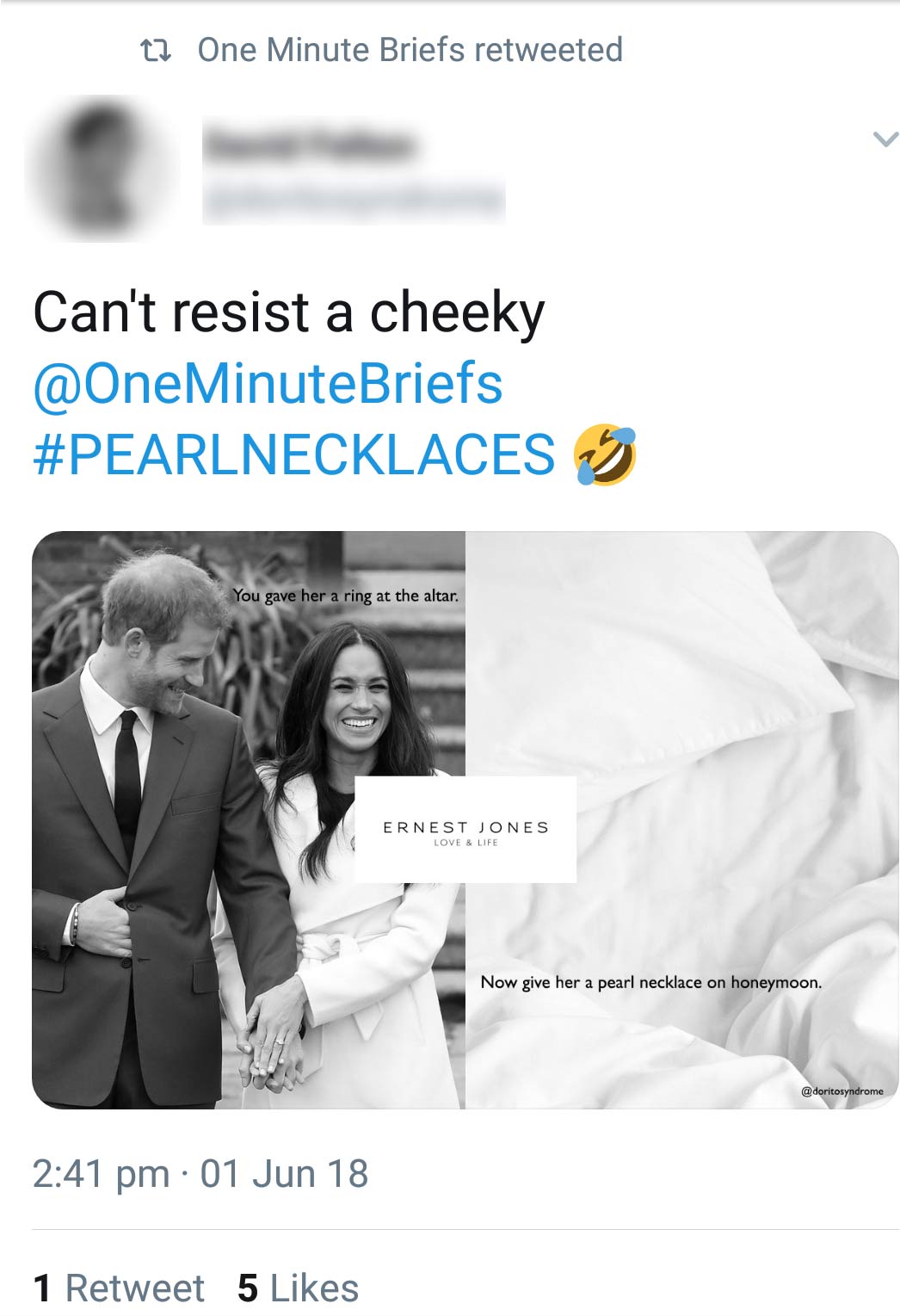 Nathalie Gordon, a creative at Above & Beyond who called out One Minute Briefs on Twitter, said that taken individually these ads might not seem like that big of a deal, but she believes that is part of what makes them so damaging. She said: "If no-one calls out this negative behaviour it continues to happen, turning what could be a one-time dispute to a systemic defect. Sexism, prejudice, bigotry, objectification – call it what you want – is cyclical."

She explained: "Someone ‘makes a joke’ on a public platform at someone’s expense, in this instance, women. Then a high-profile platform or person retweets this to its large community, in effect endorsing it. This then leads to other people thinking that those kinds of ‘jokes’ are appropriate so they make them too. And they get liked, and retweeted and applauded. And because social media is crack, people who wouldn’t normally make those kinds of jokes make them because they want to feel validated too. And so it – ‘jokes’ at other people’s expense – grows like a cancer." 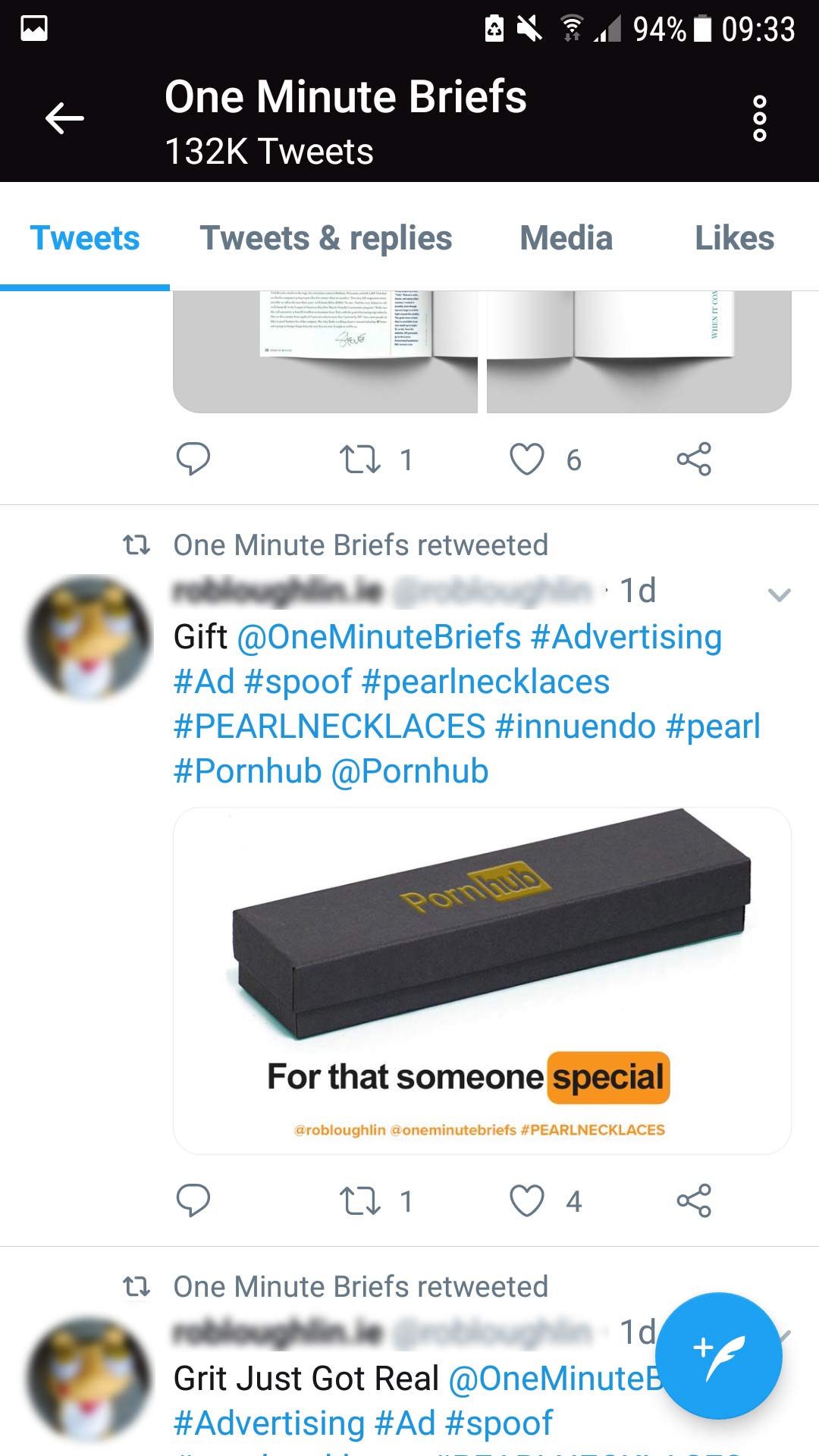 Ensuring #TimesUp is more than just a hashtag

Richard Robinson, managing partner at Econsultancy and board member at Creative Equals, says that it is clear that there is still a long way for some until they say #Timesup, pointing to how rapidly the #pearlnecklaces brief descended into an opportunity to create ads celebrating men ejaculating onto women.

He said: "The one thing worse than the ads themselves was watching them being retweeted and liked by an award-winning platform whose central premise has until now always impressed: cross-industry creatives competing, more often than not on company time, in one-line creative combat. It’s a brilliant concept, but from now on I hope agencies and employers claiming to have one foot in the present are more aware of the misogynist work some of their number are merrily pumping out over lunch when they think nobody’s looking."

This is not the first time that creatives on One Minute Briefs have been called out for creating sexist advertising. Last year Sara Keegan, a strategist at 18 Feet & Rising, compiled some of the worst offending examples submitted by the community to ask how many would pass the ASA’s new standards on gender stereotyping. This move led to One Minute Briefs pleading to set up a board to monitor submissions.

The necessity of change

Robyn Frost, a creative at Poke London who also called out the ads, added that nobody wakes up in the morning and thinks "today I’m going to call out a bit of sexism." She explained: "It’s not a bit of fun or a choice for PR exposure. What it is is necessary – whoever you are, at whatever level. It’s also intimidating as hell because you’re guaranteed backlash."

Frost said that time is up on sexist advertising and those who perpetuate it, explaining: "We’re all in advertising to make great work, so if there’s something that’s hindering that it needs to be addressed. We can’t have environments that alienate individuals or groups, and certainly not antiquated and demeaning work that not only is a poor representation of our industry, but also work that undoes so much positive progress that has been made and is being made."

She added that the industry should expect to see some "real actionable change" over the next few weeks from those who have called the ads out. "We deal in problem/solution, so when there’s a real problem like this, we’re sure as hell going to do something about it. Step one is talking – step two is change, and we can’t wait for it."

Above & Beyond’s Gordon says that we all need to do more to stand together as an opposing community who will not tolerate negative behaviour, no matter how small or inconsequential. She said: "When we let sexist, or other 'ist' jokes go, we become complicit in the attitudes that spawn and perpetuate them."

When asked to comment on the ads, Cindy Gallop, the founder of MakeLoveNotPorn, directed Campaign to the video posted below: 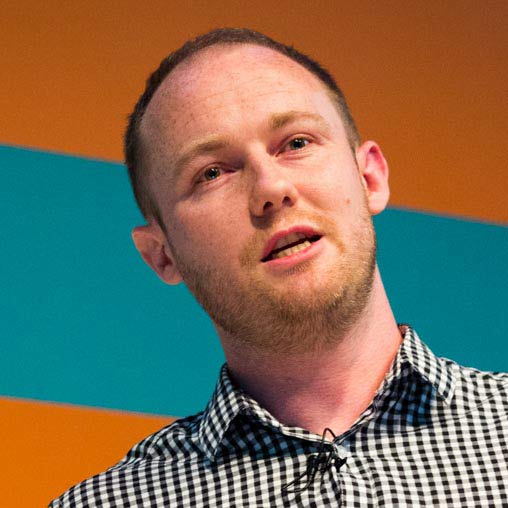 As an advocate of Creative Equals, and having recently talked at their event and called on men to get involved in the conversation on creative equality, I am disappointed to have my own stance on the subject called into question as I put a lot of effort into this and I'm very proud to have a 50/50 split across the 21,000 followers of One Minute Briefs on Facebook and Twitter.

As an open platform, One Minute Briefs has, from time to time, been on the receiving end of criticism for some of the ads sent in to us or shared by our feed.

99.9% of the time the content shared is positive, potentially award-winning or fun. A very small amount do push the boundaries of subjectivity and can cause offence as we have seen.

Sometimes, when I see something I feel is likely to cause offence, I will politely ask the entrant to take their entry down.

But, I also run this platform by myself and receive thousands of notifications per day. Therefore, I cannot vet every single entry. For example, I had retweeted an entry amongst many others on Friday, as I was running between meetings, that was criticised online. That person took his ad down immediately and I am sure has learnt from that for next time.

Upon coming out of my meeting and reading the tweets, I was concerned and published some of my own messages to ensure the community take responsibility and think of the effect that tweet will have on themselves and the entire OMB community before submitting.

I also shared that I am currently building a new website that includes a set of rules and tips we will stick to. As well as this, we have also created an OMBoard forum so we can quickly react to situations like this, even if I am not available.

We promote quick instinctive thinking and I never want to lose that core thought. However, as our platform grows more and more powerful, we have a responsibility to ensure that we are using that power in the right way, every single day as it enriches lives, builds careers and creates friendships. The work we do with Cybersmile, Creative Equals and many charities will show you that myself and our followers have the togetherness to make amazing things happen and I don't want a few examples to tarnish the amazing things that we have achieved.

The construct of this platform with its time constraints and accessibility is the reason it is so unique, but we know we're not perfect. It will have its flaws and we are constantly trying to address that, listen and have a zero tolerance approach to derogatory work.

What I would ask of the people who saw this work in return is, not to screenshot and vilify that person or an entire community, but to let myself or them know directly that you find their work offensive.

I am certain that no one goes out of their way to offend, so let's not punish them for it. Talking together amicably will remove some of the animosity from both sides that I saw last week and we can work together to make change.

This work will then be taken down, people will learn and have the knowledge and experience to teach others the same. This will help to grow the community and have an even more positive influence than ever before. 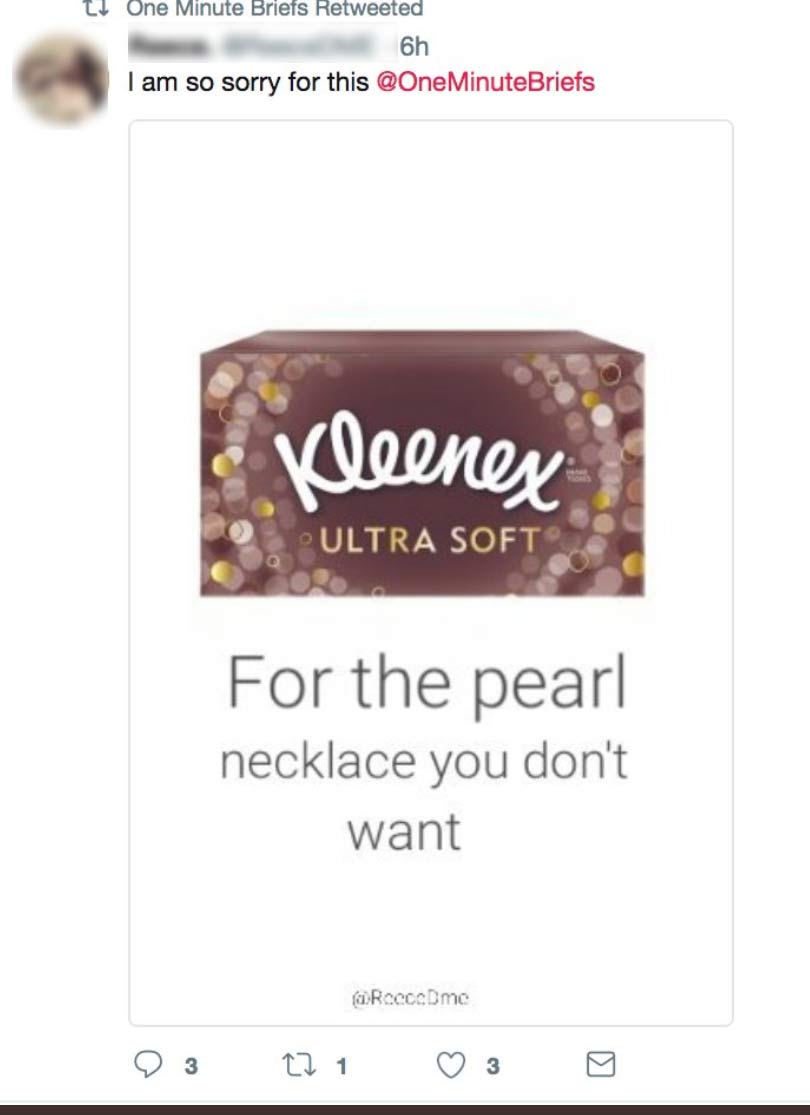