Reviews declined in both volume and frequency according to R3's 2019 wrap up.

According to Greg Paull, principal at R3,  creative and digital agency reviews were down 19 percent in quantity and 13 percent in volume for the year.

"Ogilvy finished the year in top spot, bolstered by strong performances outside the US," he said.

Wieden + Kennedy had a good December for the year,2019, taking the top spot in R3’s Creative Agencies New Business League (US) for that month. 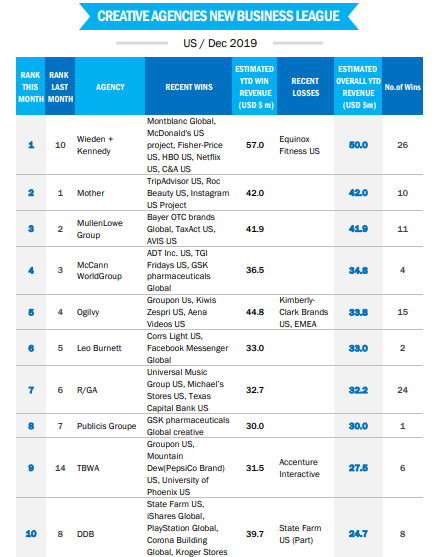 "For US business Wieden + Kennedy had a strong final month to move to number one spot in the table, followed by Mother and MullenLowe," Paull said.  "For media agencies, Horizon Media’s 60 wins secured them the top position over OMD and Carat," he added.

The shop counted 26 wins for the month, with an estimated YTD win revenue of $57 million.

Wieden + Kennedy did however lose Equinox Fitness U.S. in December as well.

On the media side the top five agencies in order were Horizon Media, OMD, Carat, Mindshare, and MediaHub. 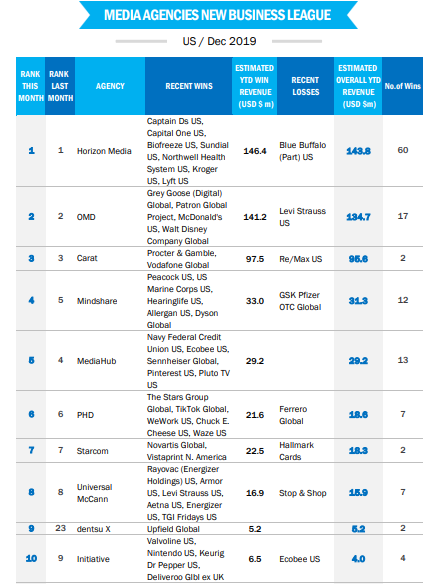 Top media wins for December in the US were as follows:

Horizon Media -Capital One US 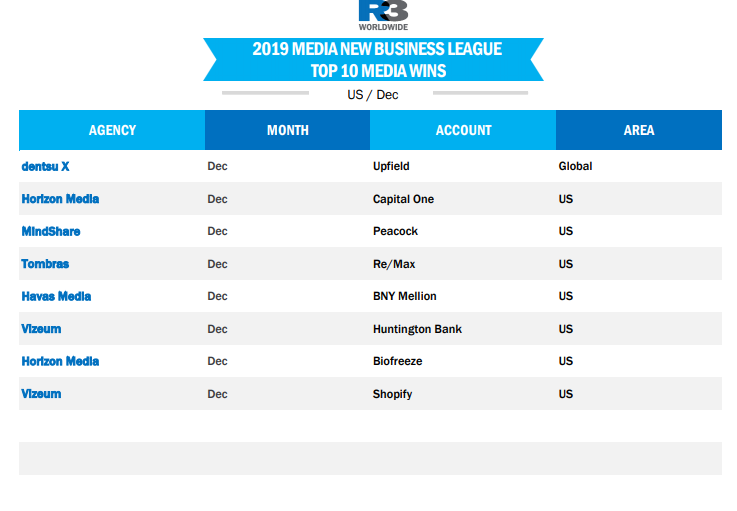 The top creative wins for December in the US were:

Team One- Make-A-Wish US 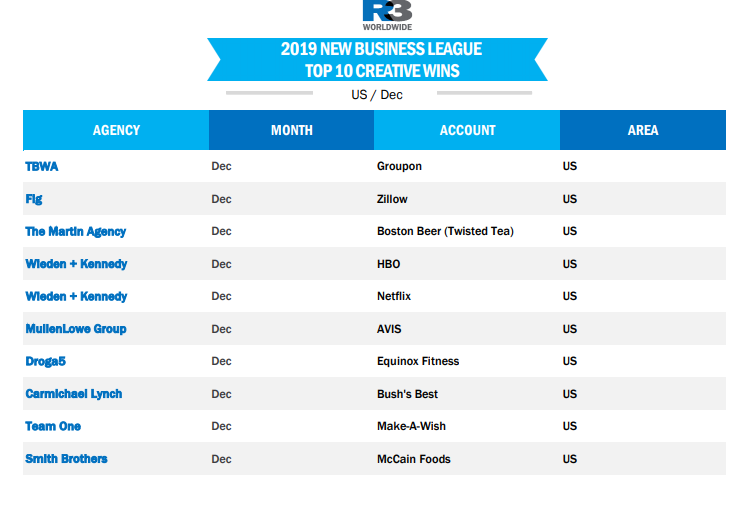 The top ten global creative wins for December were: 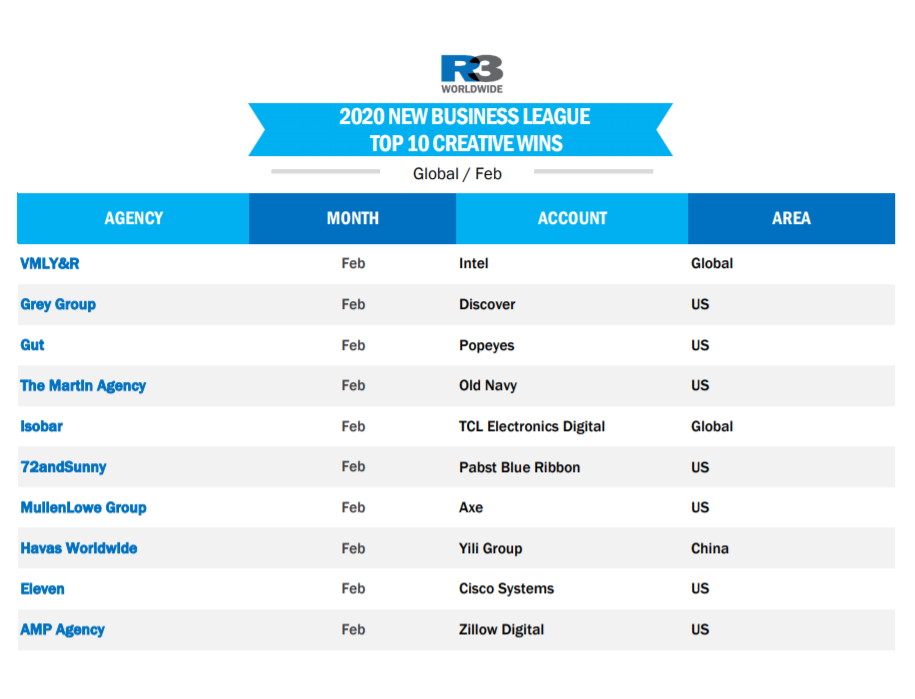 The top ten global media wins for December were as follows:

Horizon Media- Capital One US 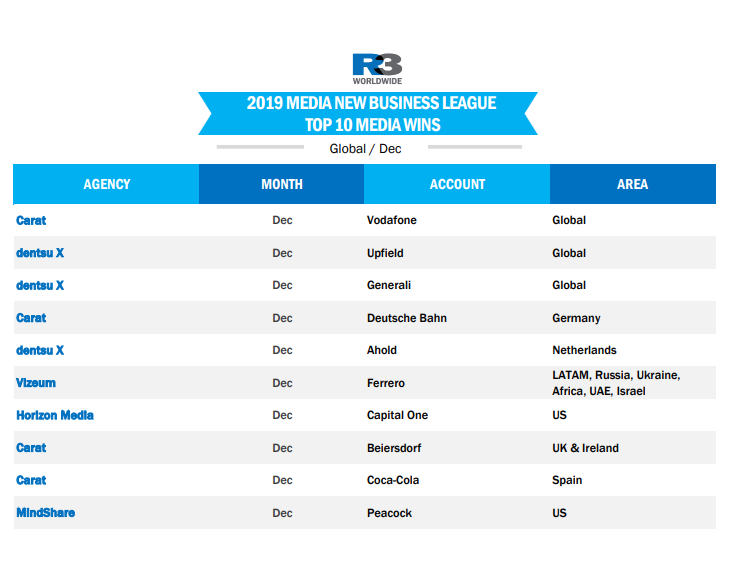 The monthly new business league for holding companies remained fairly stable, with WPP retaining the top spot, and all others moving one or two spots or not at all.

"WPP returned to the top of the Holding Company table with a combined $417m in revenue, narrowly ahead of Publicis Groupe, Dentsu and Omnicom," Paull said.

"In terms of New Business wins based on revenue, Havas performed the best with 6.2% additional revenue from new business," he added. 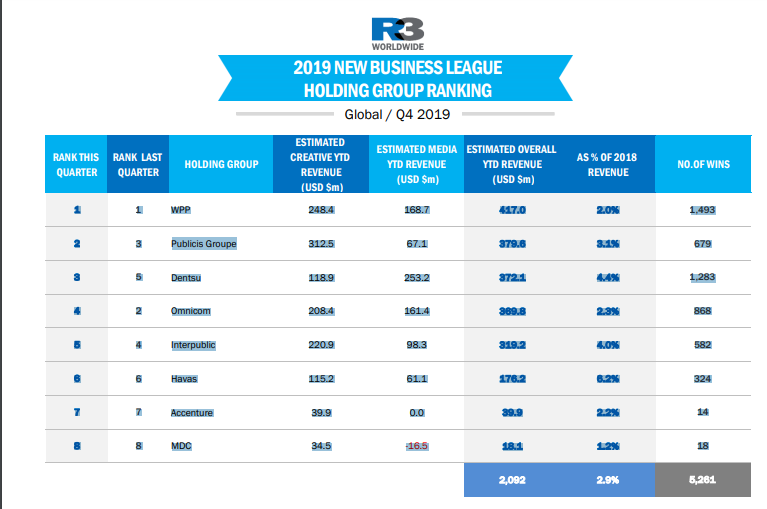 Postmates can make all your food dreams come true

M&A diversifies outside of adtech as regional presence takes priority