Forecast of search ad market suggests Amazon is only growing player in $55bn US market.

Google’s stranglehold over the internet search advertising market is set to weaken over the next two years, new research from eMarketer has revealed.

Although Google is forecast to account for nearly three-quarters (71.1%) of search ad revenue in the $55.2bn US market this year, this will fall slightly to 70.5% in 2021, eMarketer said.

Amazon is where most product searches now begin in the US, eMarketer said, citing polling data. The company saw its net search ad revenue almost triple in 2017 (186%) and double last year (120%). 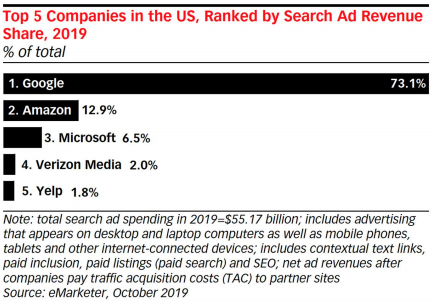 In its 2018 financial results, the online retail behemoth reported $10bn (£7.6bn) in "other services", which comprises almost completely ad revenue. Amazon remains small compared with the global digital ad markets of Google and Facebook, whose 2018 ad revenues came in at $95.4bn and $55bn respectively.

Amazon is the only company whose search ad revenue is forecast to grow over the next few years, eMarketer added. Amazon surpassed Microsoft as the second-largest ad platform for search in the US last year. 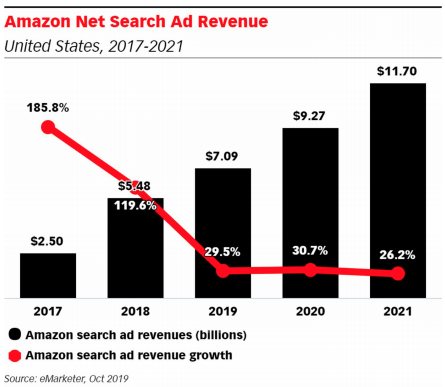 However, the company’s organic search model came under scrutiny last month following a Wall Street Journal exposé that found Amazon was featuring listings that are more profitable for the company instead of the most relevant items customers search for. Amazon’s search bar is the most common way for US shoppers to find items online, while most purchases are made from the first page of search results, marketing analytics company Jumpshot found.

Amazon’s dual role as a retailer and marketplace is being investigated by the European Union’s competition watchdog over whether it is abusing a dominant market position. Amazon has increased the number of own-brand and exclusive ranges that it offers, as well as giving its own products favourable placement on its platform.

There's not enough 'me' in autonomy

"Data is a must-have, a hygiene factor in business today"