With lush images and deep thoughts, airline tries positioning itself as the brand for elite passengers

American Airlines on Monday will unveil the first new creative work by Crispin Porter + Bogusky, the advertising agency it hired last October to do its global creative work, replacing McCann affiliate, TM Advertising, its agency for almost a quarter of a century. The carrier conducted its review during the final stages of its merger with US Airways, which made it the world's largest airline by passenger traffic.

The new campaign is centered on the tagline, "The world's greatest flyers fly American," which officials said was developed by CP+B, an MDC Partners agency, for its pitch last year. CP+B also currently does work for Turkish Airlines in Europe and previously worked with Virgin Atlantic.

Michael Raso, executive creative director of the agency, noted that airline advertising generally focuses on "legroom, WiFi, entertainment. We chose to talk about flyers, to tap into the movement of modern flying. The world's greatest flyers are a new breed of flyers. It's about attitudes over altitude."

To illustrate this concept, the campaign's 60-second TV spot--which also comes in 15 and 30-second versions--uses somewhat abstract images and language. The former include aerial views of a desert, an ocean, clouds and tulip beds, over which is superimposed a shadow that mimics the carrier's logo, introduced in 2013, representing an airplane and its iconic eagle. These images are interspersed with shots of a baby's face and men's accessories, including a watch and a shoe.

As these images speed by, copy flashes describing "the world's greatest flyers."

"They walk faster in airports than anywhere else. They like babies, but bring noise canceling headphones. They know their mood contributes to the mood of the flight. They pack like they're solving a jigsaw puzzle. They always ask before they raise and lower the window shade. They know they have limited time on earth and even less above it. These are the world's greatest flyers. And the world's greatest flyers fly American."

According to Jennifer Adams, managing director of integrated marketing for American, the campaign's concept was developed closely with carrier employees, who were interviewed in focus groups by CP+B; their input was used throughout the creative process. Raso said both American and the agency wanted to "make sure employees were used as advocates and supporters of the campaign." American has 120,000 employees worldwide. In addition to the TV spots, CP+B has created a video for employees on the new campaign, as well as print ads that discuss the "world's greatest flyers" concept. One asks, "If you could sit by anyone on a plane, would you choose you?" while another asks, " What does it mean to be a great flyer?"

The new creative will run in the United States for eight weeks, with new iterations following later this year or in early 2017. Similar advertising will run this fall in Asia, Europe and Latin America, with creative adapted to those markets. A new website, GreatestFlyers.com, also will be created, Adams said, featuring flying tips from "the world's greatest flyers." Adams declined to quantify spending.

Media used in the United States will include The New York Times, Los Angeles Times and Wall Street Journal, and TV programs including Los Angeles Rams game broadcasts and "Stand Up to Cancer," which will air September 9. American is a sponsor of both the football team and TV special. 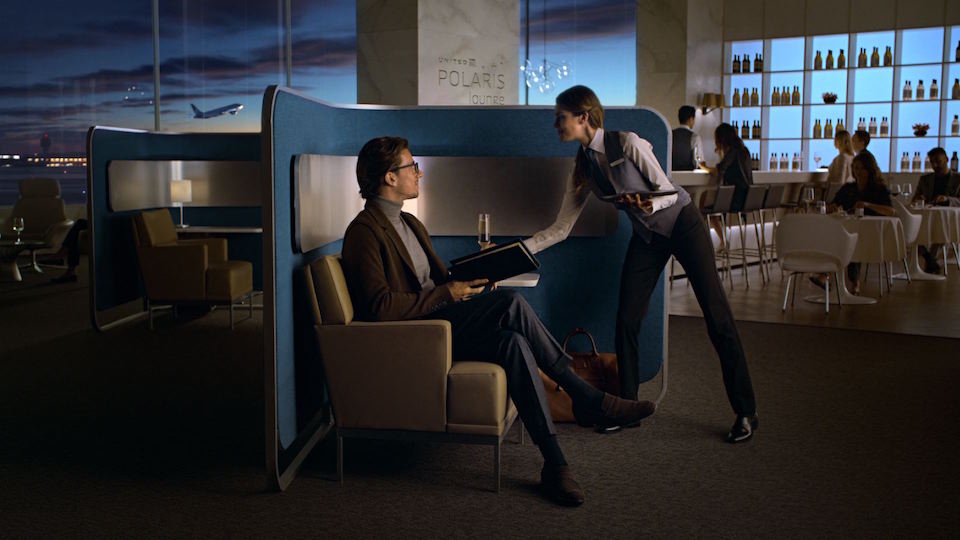 The spots will also appear on the carrier's social media platforms.
American's new campaign immediately follows a push by United Airlines to promote its new business-class product, Polaris, which it announced in June and which it will begin to roll out December 1. The new 30-second spot, by mcgarrybowen, features shots of different aspects of the product, like a shower and bedding by Saks Fifth Avenue. The voice-over, by a woman with a British accent-rather than actor Matt Damon, who provides this in other spots-says, "P is for permission to indulge, O is for out of this world, L is for loving the seasonal cuisine, A is for access to everything, including the aisle, R is for reclining in tailor-made bedding, And I must be dreaming. S. So long jet-lag."

The new spot, which began airing earlier this month during Summer Olympics broadcasts, will be joined in mid-September by digital, TV, out-of-home and airport advertising. United also has been sending a 360-degree, 3D virtual tour of Polaris, accompanied by new seats and created by Thinkingbox, across the country since last month; upcoming stops include airports in Washington, D.C., Houston, Los Angeles and San Francisco, all key markets.

Henry Harteveldt, travel analyst for Atmosphere Research and a former advertising executive for major U.S. carriers, was dismissive of all initiatives. He called American's new campaign "a retread of its old 'Doing what we do best'" advertising, first introduced in the 1970's. "The commercial itself says nothing. It makes no promise, and, worse, it makes no commitment to be a better airline," he said.

It further suggests, he added, "that you should not be on an American Airlines plane unless you're a road warrior. It's very intimidating." And he said he was "very surprised by the entire ad campaign's male-focused tone," since almost half of business travelers today are women and since American has previously marketed to female travelers.

"This is an 'emperor has no clothes' advertising campaign," he added.

He also said he found "nothing new or imaginative" in United's new Polaris spot, and warned the carrier will have to "play catch up" with other U.S. airlines' business class products, particularly that of Delta, which announced recently it would introduce the industry's first all-suite business class product in fall 2017.

Exclusive: Virgin Atlantic sees a 'Bright Side of Brexit' in darkly funny campaign

Southwest reminds us how badly 'We Wanna Get Away'