They both now feature an in-feed "mask alert", which reminds the public to wear face coverings to prevent the spread of the virus and includes a click-through link to resources from the World Health Organization.

The platforms have also implemented "Facts About Covid-19" – a coronavirus information centre that aims to debunk myths surrounding coronavirus, including controversial claims that drinking bleach can clear the virus.

Steve Hatch, vice-president of Facebook in northern Europe, claims the company has removed "hundreds of thousands of harmful posts relating to the virus" and "placed warning labels on more than 90 million posts" to prevent the spread of fake news surrounding Covid-19.

He said: "We want Facebook to be a place where people can stay informed and connected during the Covid-19 pandemic."

The government’s messaging around working from home is set to change from 1 August, when businesses will be given more discretion to encourage employers back to workplaces, where it is safe to do so.

Prime minister Boris Johnson said in a briefing today that he is planning for a "significant return to normality" by Christmas as he continues to ease lockdown measures.

He also said that people in England can now use public transport for any journeys.

Leisure sites such as theatres, music venues, bowling alleys, skating rinks and casinos will be allowed to reopen from 1 August. However, soft-play areas and nightclubs will remain closed.

A return to sports stadiums is set for October.

?? We’re excited to announce a new partnership with our hygiene brand @lifebuoysoap & the West Indies cricket team. Lifebuoy & @windiescricket will create ‘myth-busting’ challenges to motivate fans around the world to improve their hand hygiene. #ENGvWI ?? pic.twitter.com/Uoh8idLmdj

Taking place during the team’s Sandals Tour of England (which runs until 28 July), the campaign will see West Indies' cricketers take part in educational videos, as well as "myth-busting" challenges via Lifebuoy's social media channels, to showcase the importance of hygiene to an individual’s overall health.

Kartik Chandrasekhar, global vice-president of Lifebuoy, said: "We are incredibly proud to be partnering with such an iconic team as the West Indies, who are the first international sports team to travel to the UK since the country was placed in lockdown earlier this year." 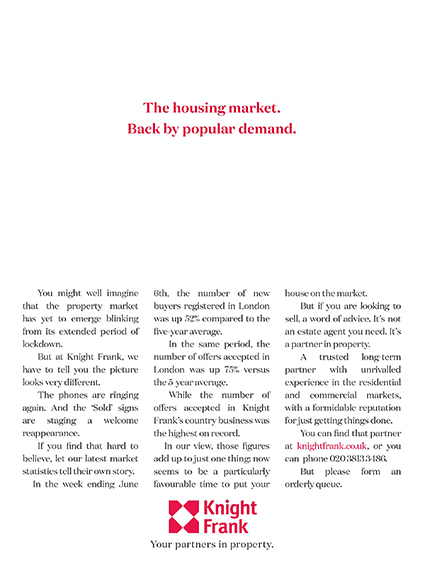 Property agency Knight Frank has launched a series of long-copy press ads to capitalise on the expected post-lockdown increase in the housing market.

The work was created by Ancient & Modern, the agency co-founded in February by Adrian Holmes, the former Lowe Worldwide chairman. Media planning and buying is being handled by Four Communications.

Live Nation has cancelled its drive-in concerts that it announced last month over concerns of localised lockdowns.

Concerts, theatrical performances and comedy shows had been planned for 12 outdoor locations in the UK, including Resorts World Arena NEC in Birmingham, Cheltenham Racecourse and Central Docks in Liverpool. The events, produced in partnership with energy supplier Utilita, were scheduled to take place from 29 July.

Growing concerns over coronavirus "hotspots" in some locations have led the organisers to call off the shows.

In a statement, Live Nation said: "The Live from The Drive-In concert series will no longer proceed as planned this summer.

"We received huge support from artists, the live music production contractors, our headline sponsor Utilita along with our other partners and of course you, the fans.

"However, the latest developments regarding localised lockdowns mean it has become impossible for us to continue with the series with any confidence."

Ticket-holders are expected to get full refunds.

John Lewis & Partners has created a free virtual personal-shopping service to provide customers with advice while at home.

Held via a 30-minute Zoom call prefaced by a questionnaire, customers will be given recommendations from a personal shopper on a range of products including bedding, cookware and gifts.

Experts are also available to advise on more complex products such as tablets and phones.

The service will initially be tested by personal shoppers in London and Southampton’s Peter Jones stores. It follows the success of John Lewis’ virtual services for personal styling, home interiors and expectant parents.

Steven Hand, head of customer experience at John Lewis, said: "What our partners offer in our shops is impartial expertise and advice from our partners and this pilot means we can offer that again to customers all over the UK who cannot get to our shops.

"The lockdown has changed customer habits, but customer service remains as important as ever."

9.30am: London theatres come to small screen in BritBox deal

BritBox, the subscription platform majority-owned by ITV, is bringing some of London’s best theatre shows to the small screen via a "centre stage" collection.

The collection, launching on 23 July, will feature concerts, documentaries, comedy, plays and ballets in a celebration of British entertainment.

Titles include 25 Royal Shakespeare Company productions – such as 2013’s Richard II starring David Tennant and 2018’s Macbeth featuring Christopher Eccleston – as well as the Royal Ballet’s productions of The Nutcracker and Alice’s Adventures in Wonderland.

Channel 4 has created a lockdown version of its most popular non-scripted show among 16- to 34-year-olds, Celebs Go Dating.

The series is set to run on E4 alongside social media and in-store activity, as well as a competition for singletons to "find your other half". Media was handled by 4Sales, Lime Pictures and MediaCom.

Sophie Lloyd, branded entertainment and creative leader at Channel 4, said: "This show is a prime example of a connected, cross-platform advertiser-funded programme with Channel 4’s editorial values at its core.

"We are delighted to be working with Extra for the first time – a partner who understands the power of branded entertainment and its activation beyond the screen."

3pm: Consumer trust in brands and marketing in decline

Industry professionals are concerned about the impact of Covid-19 on the digital economy, according to a survey from the Data & Marketing Association.

The study, which looked at the impact of Covid-19 on the data and marketing industry, found that 29% of participants believe coronavirus is harming public trust in brands and marketing – a rise from 17% in May.

More than half (57%) of respondents think the government’s Track and Trace initiative will negatively impact consumers’ willingness to share personal data – a figure that stood at 42% two months ago. Meanwhile, less than a third (32%) said they were confident in the nation’s leaders – a rapid drop from 64% in March.

Chris Combemale, chief executive of the DMA, said: "Businesses rely on consumer confidence and trust, without which they are unwilling to share their data with organisations.

"It’s concerning to see the level of negative feeling toward the government’s handling of the ‘Test, track and trace’ roll-out. If not resolved, this could have a lasting impact on our industry and the long-term health of the digital economy."

In an ad created by Officer & Gentleman, "Pornhub’s big package for small businesses" showcases 10 businesses from around the world, all of which proudly declare their involvement with the platform after experiencing "some major growth, right where it counts".

The work was created by Javi Iñiguez de Onzoño and Alex Katz, and directed by Leonardo Cosme through Wild Boar Productions.

All successful applicants will have a pro-bono ad created by Officer & Gentleman that will be shared on Pornhub’s website and social media channels.

Nabs, the support organisation for the advertising and media industry, is calling on artists to contribute to its online art auction.

The auction is set for 24 September, with all proceeds going to those in need within the industry during the pandemic.

All works will follow the theme of "courage" to celebrate the industry’s resilience during lockdown, following a 243% increase in calls to the organisation around the topic of redundancy.

Kate Harris, regional director at Nabs, said: "Our industry needs Nabs more than ever. Now everybody in the country has the chance to get creative and submit their artwork for this vital cause.

"The art auction gives everyone working in adland a chance to support their colleagues while celebrating the courage we’ve seen so much of over the past few months."

The submission deadline is 14 August.

Retail brands have less than two weeks to prepare for face coverings becoming mandatory in shops across England.

From 24 July, new legislation will come into force requiring shoppers to wear face coverings or risk a fine of up to £100. Ministers are expected to lay out the plans more fully later today. Face coverings have been compulsory in shops in Scotland since 10 July.

The guidance on working from home – which currently supports home working "as much as possible" – is also poised to change, with prime minister Boris Johnson, among others, concerned about how the lack of office workers in towns and cities is hurting the high street.

Supermarket brand Lidl has announced a £1.3bn expansion in the UK over the next two years as demand for groceries has surged during the pandemic.

Lidl, which has added 2,500 temporary jobs to cope with soaring demand, now plans to add 125 stores in the UK by 2022 as it anticipates more home working to continue.

The brand works with Karmarama on advertising and OMD on media.

The Locals Only initiative aims to support small businesses that have been affected by Covid-19 and will run in Amsterdam, Berlin, London, Los Angeles, Melbourne, Mexico City, Milan, New York, Paris, Singapore and Toronto.

UK government's coronavirus messaging has yet to hit home

Virtual kitchens and meditation time: how to stay sane working from home

Behind the scenes: when Campaign goes into self-isolation

How to overcome the pitfalls of working from home

How is working from home going for you?

Navigating the coronavirus: an FAQ for agency leaders and their people

MediaCom to trial all staff working from home

ITV forecasts 10% fall in April ad revenue due to coronavirus

Could coronavirus tip the global ad market into recession?