The Advertising Standards Authority has banned a Facebook ad for Natural Cycles that refers to the pregnancy planning app as being "highly accurate" and a "clinically tested alternative to birth control methods".

Women who use the app are required to take their body temperature each day using a thermometer provided as part of the £40 annual subscription charge, and enter this into the app, along with recording when their period starts, and when they have sex.

The app then uses this data to map the user’s menstrual cycle. Each day, it provides either a "red" or "green" reading to let the user know whether it is safe to have sex without another form of contraception without the risk of becoming pregnant. 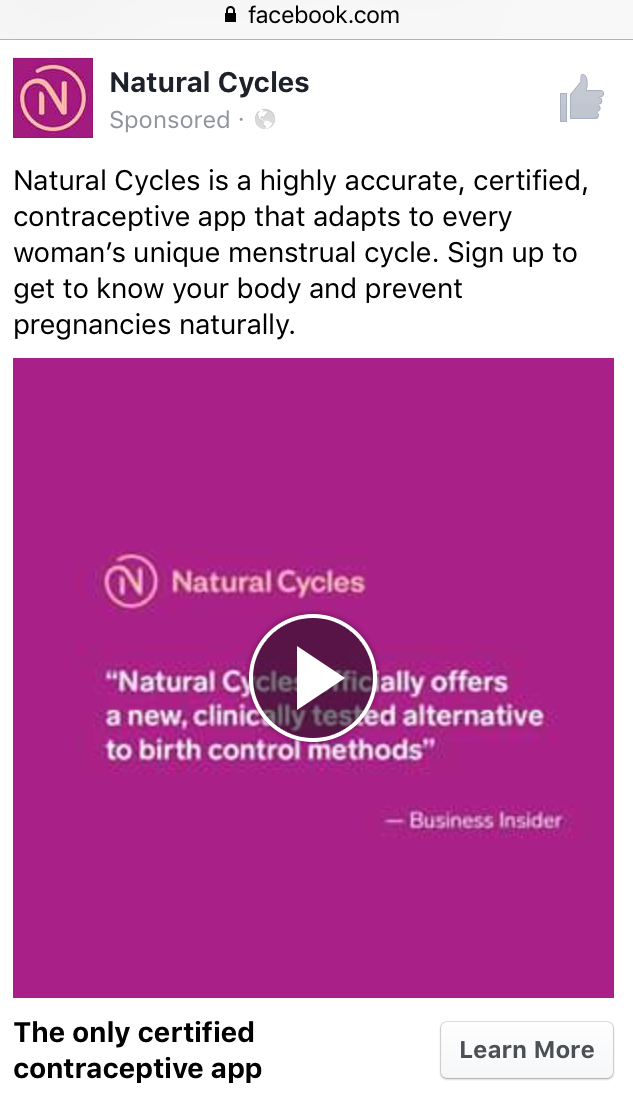 Natural Cycles became the first app to be sanctioned as a form of contraception by the European Union last year, and this was followed by US Food and Drug Administration approval earlier this month. But it has been hit by a backlash from users who became pregnant despite believing they had used it as instructed.

Three users complained to the ASA that the ad (right) for Natural Cycles was misleading. Natural Cycles said that the app had a "perfect use" failure rate of just 1% – meaning that if used exactly as instructed, only 1% of users would become pregnant over the course of a year. Its "typical use" effectiveness, meanwhile, was 93% – resulting from factors such as users not taking their temperature at the correct time.

But the ASA said studies had shown that, in reality, only 9.6% of menstrual cycles tracked on the app were considered "perfect use", due to factors such as intercourse being reported in only 32% of cycles. As a result, the watchdog ruled it would be misleading to base the claim of "highly accurate" on the perfect use figure.

It added that the figures for Natural Cycles, including the difference between perfect and typical use, were comparable to condoms and the oral contraceptive pill – but that long-acting reversible contraceptive methods such as IUDs and implants did not have this discrepancy, meaning they had much higher success rates in practice.

It determined that the claim was misleading and that the ad breached CAP Code rules on misleading advertising, substantiation, exaggeration and health-related products. It ordered Natural Cycles "not to state or imply that the app was a highly accurate method of contraception and to take care not to exaggerate the efficacy of the app in preventing pregnancies".

"When choosing a method of contraception, it’s vital women have accurate, impartial information on each method, including the risk that it won’t work," Stephens said.

"Traditional methods like fertility tracking carry a higher risk of unintended pregnancy than modern long-acting methods like the implant or IUD. Every woman has to choose the method that’s right for her, so contraception providers have a responsibility to provide the full picture."

Advertising watchdog will investigate Lloyds Bank over 'By your side' slogan

Advertising watchdog will investigate Lloyds Bank over 'By your side' slogan