More and more outsiders are competing with traditional marketing groups to buy agencies.

Mergers and acquisitions in marketing services have never been so dynamic or unpredictable, according to a new survey of the agency landscape.

These acquirers all want to add capability in the same areas – chiefly digital, data, design and customer experience. And they see an opportunity for growth as clients are asking for help with business transformation – the number-one priority facing most companies in the face of digital disruption.

WPP is worth $29bn. By contrast, Accenture is valued at about $76bn and IBM has a $170bn valuation

The annual survey by Clarity and JEGI, corporate advisory companies based in London and New York respectively, looked at 867 agency acquisitions across Europe, North America and Australasia last year and found that 39% of agencies were bought by a business with "a heritage outside marketing services".

"You’ve got so many more buyers," Marcus Anselm, a partner at Clarity, which specialises in media and technology, says. "It’s not relevant to just look at the global ad networks as the main buyers any more."

Consulting giant Accenture and computing behemoth IBM are among the surprising buyers to feature in the top ten most acquisitive companies in marketing services in Europe, North America and Australasia in the 2016 survey.

The fourth-biggest acquirer was The Marketing Group, a mini-holding company that debuted on Nasdaq’s Nordic stock market in June 2016 and bought eight agencies, according to the report.

Other notable buyers in the top ten include independent marketing groups Dept from the Netherlands (five acquisitions), Serviceplan in Germany and Webedia in France (four each). That shows potential buyers of agencies now come from across Europe, Anselm says.

But it is Accenture, which acquired six agencies including London creative shop Karmarama, and IBM, which bought five including US digital outfit Resource/Ammirati, that stand out in the top ten because they do not fit the profile of a traditional marketing group.

What is significant about many of these new entrants is that they have huge resources. WPP is worth $29bn. By contrast, Accenture is valued at about $76bn and IBM has a $170bn valuation.

There is anecdotal evidence that the big ad networks are "losing out" in the bidding for agencies against the consulting and computing giants, Anselm suggests.

Furthermore, the "big six" ad holding companies are buying fewer agencies. They made 103 acquisitions globally last year – the lowest number since 2011. M&A activity by WPP and Publicis Groupe, in particular, was "sharply down on previous years", the report points out.

Although WPP was the most active buyer in Europe, North America and Australasia in 2016, Dentsu led the way globally. Dentsu bought 40 agencies, up from 26 a year earlier, including digital outfit Merkle. By contrast, WPP bought just 33, down from 44 in 2015 and 64 in 2014. Omnicom and Havas made fewer acquisitions too. 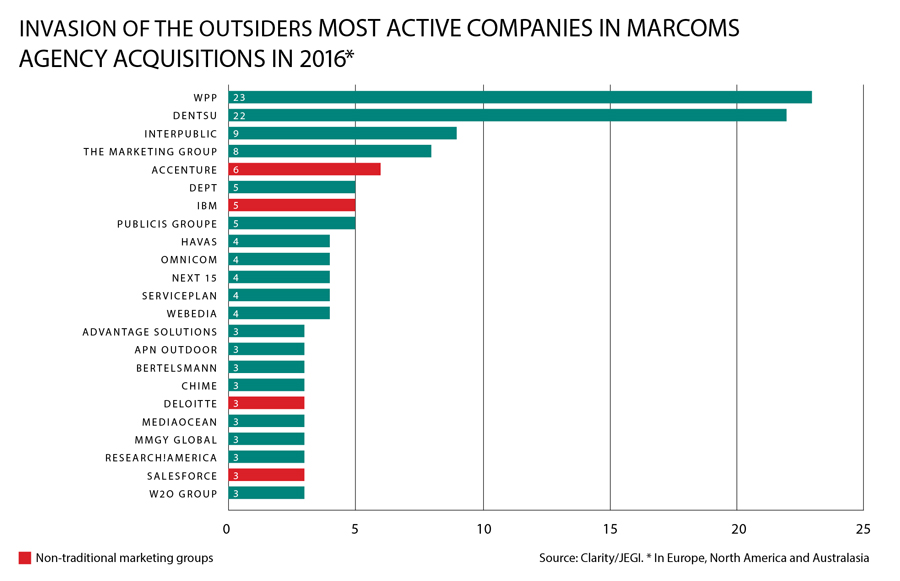 Apart from Dentsu, Interpublic was the only other of the "big six" to buy more agencies in 2016 compared with the previous year.

Then there are brands and media owners that have been buying agencies in recent years. Coty bought Beamly, a social media shop, to handle the beauty and fragrance group’s digital advertising in-house, while Time Inc acquired experiential marketing agency INVNT. 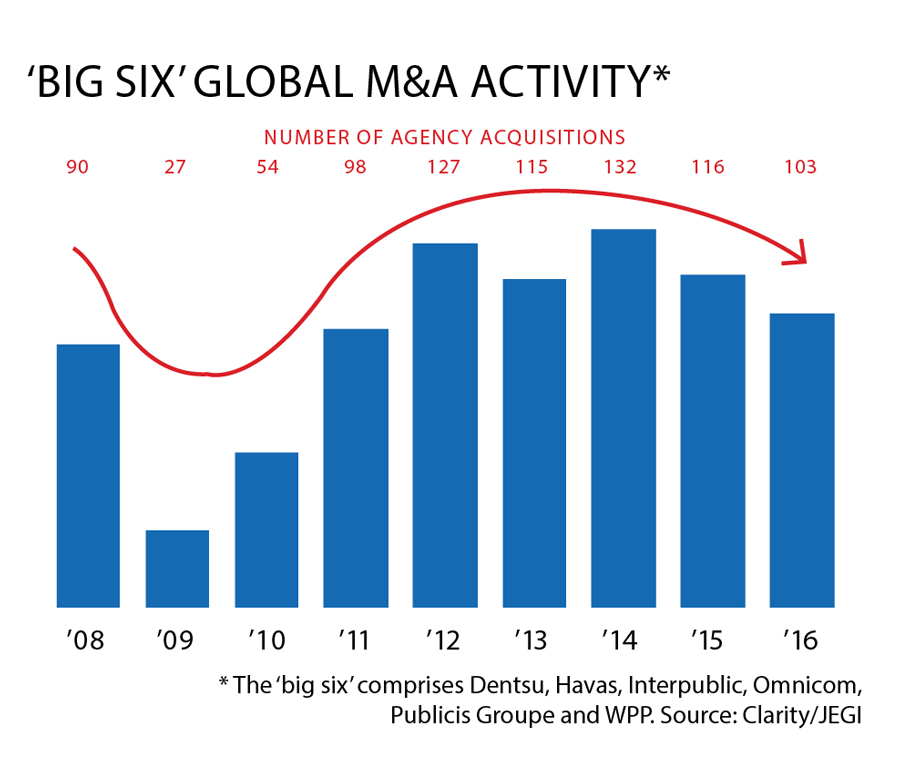 Given the range of potential buyers, independent shops are spoilt for choice if they want to sell.

Most of the 867 acquisitions in Europe, North America and Australasia in 2016 were made by
businesses in the US (461 acquisitions) and the UK (145 acquisitions).

The march of the management consultants, in particular, has caught the attention of adland and beyond. For companies that are buying capability and talent, an agency’s revenues can be more important than profit. As a result, some agencies will be valued at two or two-and-a-half times annual revenues rather than, say, eight or ten times profits.

City analysts play down the challenge to the "big six" networks, which still make the bulk of their profits from media buying.

"Consultancies have not made any sort of serious attempt to capture the agencies’ business in this area [of media buying]," according to a report into media trends in 2017 by London-based investment bank Liberum.

But if outsiders to adland are already beefing up their capabilities in creative, design and data, then how long before media is the next target?

Want to find out more about the emerging trend of mergers and acquisitions? Join Campaign's editorial team at a special breakfast briefing on 14 March to hear directly from the executives involved in Accenture's acquisition of Karmarama.  Book your tickets here

Karmarama's Studzinski to be chief creative for Accenture Interactive in Europe

Accenture's deal is a sign of bigger things to come

Accenture 'is building new breed of agency' with Karmarama