Women deal with manspreading on public transportation and mansplaining in sales negotiations. But at the office, there’s now a new tool for dealing with constant manterruptions. Just in time for International Women’s Day on Wednesday, BETC Sao Paolo has released "Woman Interrupted," a smartphone app that analyzes conversations to determine exactly how often a woman is being interrupted by the men she’s trying to speak to.

Like so many other people around the world, the Brazilian agency was spurred to action by the U.S. political system. "Last year, we observed what happened in the North American elections, when Donald Trump interrupted Hillary Clinton several times, and sometimes some journalists also interrupted her," said Gal Barradas, co-CEO and CSO of BETC Sao Paolo.

It’s a scenario every woman can understand, no matter how successful. "Along my career, I went through these situations several times, no doubt about it," Barradas said. "I had conversations with other [female] CEOs, and all of them of them have been in this situation."

Available for iOS and Android, "Woman Interrupted" is currently in beta. Users teach the app to recognize their voice by repeating a short phrase. After that, it can be used to evaluate conversations—the app counts the number of times a male voice (determined by pitch) cuts off the user’s voice in mid-sentence. It also generates a graphic report that pinpoints where in the conversation the interruptions occurred, and lets users share it directly to social media. 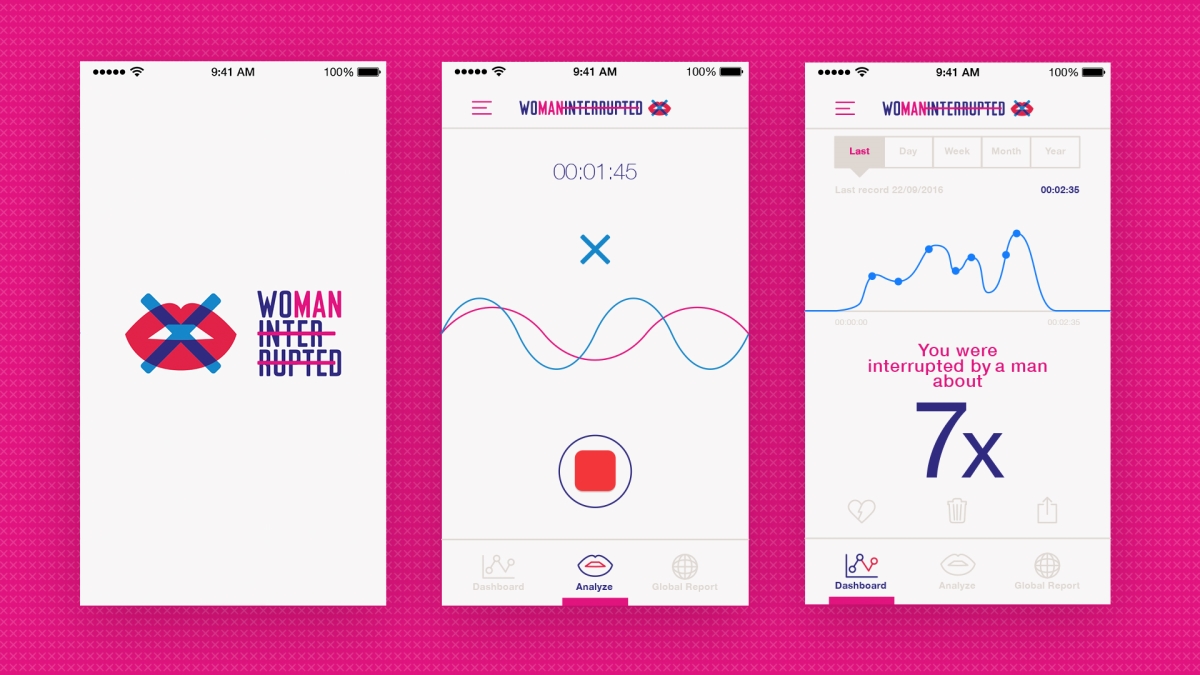 For users worried about running afoul of privacy laws, the app doesn’t actually record any conversations. It analyzes the audio in real-time without saving any of the words themselves. In addition to English, it can recognize manterruptions in Spanish, French and Portuguese.

Lest the menfolk feel left out, the app can also be calibrated for a man’s voice, and will tally up the number of times a male user interrupts a woman. "It’s so embedded in our culture, sometimes we don’t realize it’s happening," Barradas said. But even at BETC itself, the results have been promising.

Men at the agency have begun to change their behavior, according to co-CEO and CCO Erh Ray. "Once people know about this app, they think twice about interrupting anybody, even the men who are with them," he said.

Last fall, in the weeks before the American presidential election, the agency hit upon the idea of creating an app to address the problem. It took several months to develop the conversation recognition algorithms, which were created in partnership with production company Brave. It was specifically designed to be used in a corporate environment, Barradas said, though it’s equally useful in more familiar settings. "From a simple tragedy to the worst violence against women, communication is a day-to-day problem that every woman in the world has to face."

In four to six weeks, after users around the world have shared the data of their own conversations, BETC Sao Paolo plans to collate the information to provide a clearer picture of the phenomenon worldwide. For now, promotional videos are running online and on social media, and pro bono print ads designed by female artists are running in OOH placements and in local Brazilian magazines. The agency is looking for additional media partners, Ray said, who should be in place in the next month.

Watch: Kate Stanners on how to get more female creatives in advertising

6 stereotypes of women in advertising

Time for tech industry to end its bro-culture

Can you find the women in these 'Where's Waldo'-style posters of Egyptian workplaces?

1 year later: Badger and Winters on #WomenNotObjects in the age of Trump