Less than two weeks ago, MetLife dropped its identifiable Snoopy mascot and revealed a new logo as part of a redesigned brand identity.

But the new blue and green logo for the financial service and insurance provider looks very similar to another—the logo for Diffen, a website that functions like Wikipedia, and allows users to compare any two things.

On Twitter, a man who presumably works for Diffen pointed out the similarities between the designs with a photo in a tweet that pinned the two logos next to each other. Both logos have two overlapping curved shapes of blue and green. He wrote, "MetLife’s new logo is eerily similar to our logo—one that we have been using for years now. Not cool, MetLife. A $50 billion company and you guys couldn’t come up with something original?"

MetLife’s new logo was created by Prophet, an agency and brand consultancy that had worked with the brand for the past year to redefine its overall strategy.

Craig Stout, associate partner and creative director at Prophet, said the logo had been created to represent the desired personality of the brand. "We created a symbol that could tell that story—two pieces coming together creating a new monogram," he told Campaign US at the time of the launch. The blue shape reflected the company’s past creative work, while the green isn’t a color used frequently in the insurance industry, according to Scout. Together, they formed the letter "M" for MetLife. Diffen did not respond in time for publication.

Christopher Lehmann, managing director at Landor, a San Francisco-based branding identity and design agency, calls the occurrence a "regrettable coincidence." "What you hope for is to avoid stuff like this," he said. "I’m absolutely certain that whoever designed this or whoever led this program for MetLife is probably just regretting and pulling their hair out that this thing happened."

Lehmann, who has also worked as a creative director and senior designer, and has taught graphic design at the Academy of Art University, said there are a lot of ways for companies to make sure a logo design is not already in use. "Before they spent millions of dollars to launch, they should have absolutely done their deep trademark research to make sure there wasn’t anything out there that looked like a conflict," he said.

Still, Lehmann said it happens so often in advertising that it’s nearly impossible to be completely original. For instance, a number of well-known brands have similar logos, like Chanel and Gucci, Bentley and Mini, and Auto Trader and Pepsi. "You can do all the due diligence and make sure something is free and clear, and yet something can sneak up on you," said Lehmann.

Oftentimes, the implication is that the brand or agency ripped off the logo, but Lehmann doesn’t believe that is the case, especially with what he called a "reputable" agency.

MetLife claims that the logo is distinctive and unique, at least for the financial services industry, and "any similarities to a logo outside the category are purely coincidental." "MetLife went through a rigorous creative and research process to arrive at a logo that speaks directly to the partnership the company has with its customers," said the company in a statement.

Moving forward, the companies might choose to talk it out and find out their logos can coexist since they are in two very separate industries, said Lehmann.

Regardless, the two logos can easily be compared and Lehmann said he believes the Diffen identity is designed better than MetLife’s. He said, "There’s a little more sophistication around the shapes and the typography and even the relationships between the two."

Update: Diffen has used its own website to compare its logo to MetLife's: 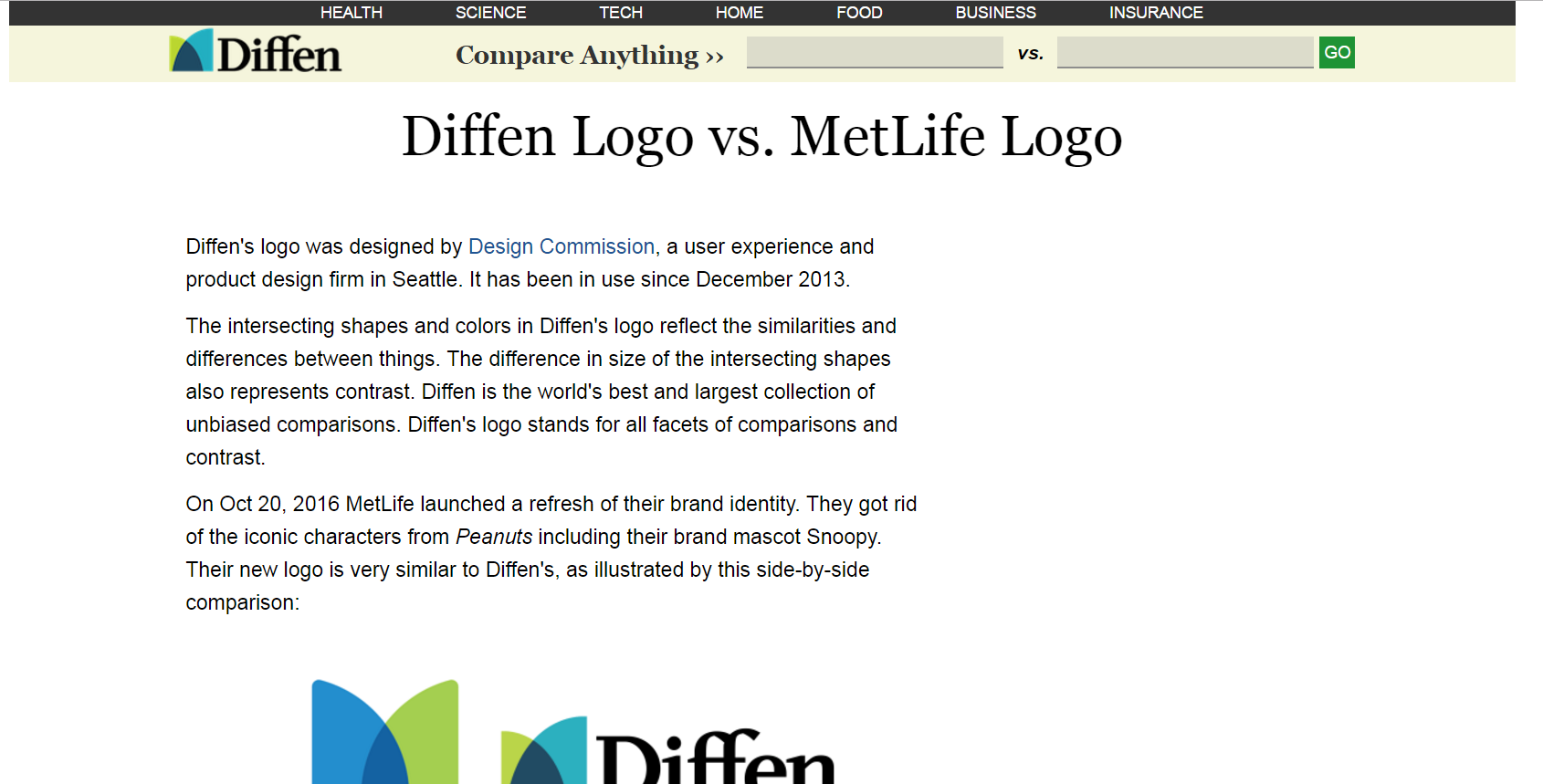