The brand was met with overblown outrage after a slightly misjudged attempt to challenge negative perceptions of women's football.

So it wasn’t to be: the Lionesses put up a decent fight last night, but couldn’t match up to the US machine. Phil Neville thought that by donning a Southgate waistcoat, he could push his side to replicate the success of England’s men last year; turns out he was exactly right. But while the team’s performance might not go down in history, this tournament will be remembered as the moment women’s football became a seriously big deal.

Last night’s semi-final was watched by a peak audience of 11.7 million, equivalent to a 50.8% share – making it the most-watched TV programme of the year so far. It smashed the previous record for a women’s football match, 7.6 million, set last week by England’s quarter-final. That, in turn, broke the record set by England’s second-round match, which drew an audience of 6.9 million.

As of Monday, 22.2 million people – a third of the UK – had watched the BBC’s coverage of the Women’s World Cup since it began on 7 June. That’s almost twice as many as the total audience of the 2015 tournament, at 12.4 million.

Yes, it’s unlikely that a large number of these fans will be keeping up with the Women’s Super League when it returns in September, but one thing at a time. It’s the major tournaments that provoke the greatest engagement and enthusiasm in any sport and these numbers prove that the pinnacle of women’s football is steadily catching up with the men’s World Cup.

Although the BBC was the sole UK broadcaster of this tournament, it’s hard to imagine that commercial channels won’t be looking with interest at the rights to Euro 2021, which takes place in England, and the 2023 World Cup.

But despite the booming audience potential, there’s something strange going on with advertisers. According to research from Kantar, the ads released around the World Cup have simply not been up to scratch, in terms of both brand impact and their ability to drive sales.

One explanation for this could be the focus of many on the social and cultural narrative around women’s football. Almost all the ads featured here are concerned with tackling negative perceptions or overcoming adversity.

It’s entirely understandable that brands take this approach; until recent years, women’s football suffered from a tiny profile relative to the men’s game and widespread, bluntly misogynistic views about the quality of the sport.

But not only does it mean the advertising is less than fully consumed by the thrill of the sport, it also creates a vicious cycle; as long as the discourse is around challenging perceptions that women’s football is inferior, that will continue to be seen as the default point of view.

Go on then, change my mind

Coca-Cola offers a cautionary tale with a recent marketing move that provoked the ire of fans. The brand decided to challenge negative ideas about women’s football head on by finding a propagator of them online and inviting him to attend the England vs Scotland group-stage match in Nice last month. The invite was sent by Fara Williams, the most capped player in England history (female or male – her 170 caps is 45 more than Peter Shilton’s 125).

The (un)lucky guinea pig was Keanu Bruton, who had rather innocuously tweeted: "Women's football is just not very good." Coca-Cola’s gambit was that by offering Bruton a memorable experience of a live match in the French Riviera, alongside a legend of the game, he would be prompted to re-evaluate his views. 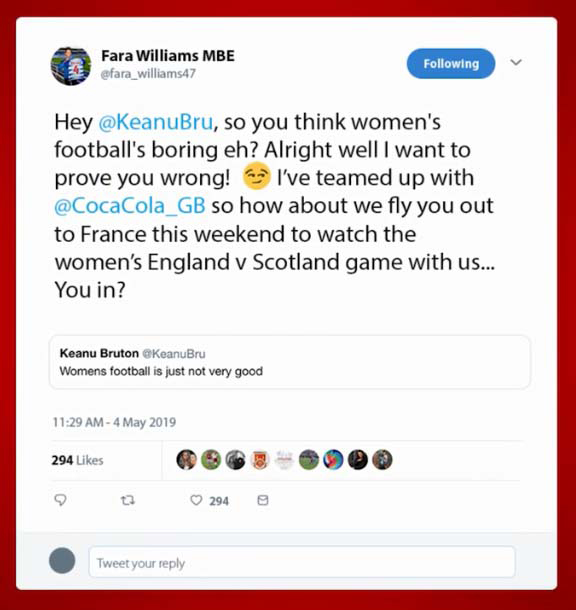 Unfortunately for Coke, it hadn’t really considered the optics of giving a free trip to a young man who at the very least had expressed a lack of interest in women’s football, when there were genuine fans who couldn’t afford to go to France and would have jumped at the chance to join Williams at the match. Cue an angry backlash. While Coke did eventually publish a film about Bruton's experience, it did so with little fanfare, two weeks after the match.

I can appreciate the strength of feeling in response to Coke’s move. But the outcome is unfortunate: with a bit more tact, Coke could have produced something fairly inspiring. The idea of overturning the views of a sceptic is sound; I was at the match along with Williams and Bruton, and the experience definitely bolstered my own opinion of women’s football. (On a side note, credit to Scotland, who were dire in the first half but massively upped their game after two tactical substitutions, and were unlucky not to get a draw.)

I felt a little sorry for Bruton, who had been singled out for a comment that was perhaps mildly bigoted but hardly an unusual opinion, and became the subject of public rage (although, to be fair, he still got a free trip to France out of it).

Coca-Cola also points out that this one of of several ways it has used its sponsorship to reach "both fans and non-fans". It has also sponsored the Channel 4 show Women's Football World, presented by Clare Balding; given away tickets through in-store promotions; and most pertinently, is taking a group of young female footballers from its charity partner StreetGames to the final in Lyon.

A spokeswoman added: "But we think it’s also important to reach those who have been critical of the game too, which is why we decided to find someone who had been dismissive of the women’s game and challenge these perceptions head on."

The lesson from the backlash is that Coke should have approached the idea through a different framework, perhaps by inviting Bruton as part of a group of hardcore fans. Its mistake was putting the emphasis solely on challenging negativity – which, despite good intentions, ended up aggravating fans, putting Bruton in an unfair position and falling into the trap of the vicious cycle described above.