Both fashion houses have seen their ambassadors quit and have become the subject of debate on Chinese social media for listing territories China considers part of the mainland as separate countries.

Following Versace, Coach has become the latest brand threatened with boycotts by Chinese internet users over the listing of certain regions as separate countries.

On Monday, users of the Chinese social media platform Weibo found that Coach had featured Hong Kong and Taiwan on a t-shirt made in May 2018 in a way that made them look like distinct nations, leading some to urge the brand to explain and apologise.

China considers both regions to be part of the mainland. Hong Kong was a former British colony and is ruled as a Special Administrative Region (SAR) of China governed by a "one country, two systems" principle.

Taiwan is viewed by the Chinese as a province of mainland China, although the Taiwanese see themselves as an independent nation.

Several cities and countries are listed on the back of the t-shirt, part of a collaboration with Disney. While Beijing and Shanghai are clearly marked as cities in China, Hong Kong is not, and the city of Taipei is followed by 'Taiwan', which appears to place the region's status as parallel with that of other countries like Canada or the United States. 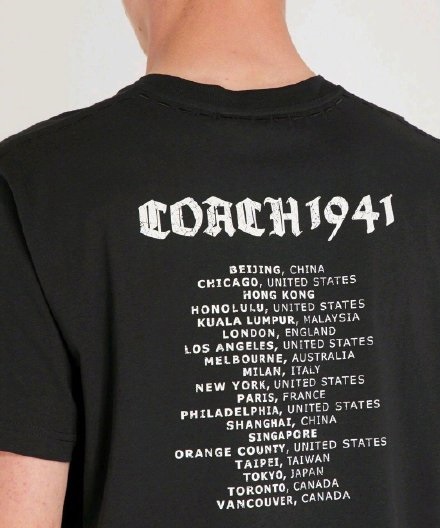 Chinese model Liu Wen, who is Coach's China brand ambassador, announced on Weibo this morning that she decided to stop cooperation with Coach, as "the brand has seriously damaged the feelings of all Chinese and should be severely criticised." According to Weibo users, Coach's international website also listed Hong Kong and Taiwan as separate from China in their "Search Country" feature. When Campaign Asia-Pacific checked, both Coach's international and Chinese sites were down, the former listed as "temporarily offline for maintenance".

One Weibo user wrote in their newsfeed: "Coach can say Goodbye. So disgusting." Another user said: "Although this is common but doesn’t mean it’s reasonable. We should let all brands refrain from doing so [listing Hong Kong, Macau and Taiwan as countries], and let the world know these regions belong to China." At noon, Coach published a statement on Weibo, making an apology for the incident. "In May 2018, we found the serious mistake with the design of several T-shirts. We realized how serious the problem is and immediately took actions to remove them from shelves.

Meanwhile, we have strengthened internal management to avoid the same mistake happen again." However, Chinese internet users aren't buying it. The statement has attracted nearly 25,000 comments, with many telling the brand "get out of China!"

Some question Coach's sincerity, asking why Coach found the problem in May 2018 but didn't make an apology until 15 months later. And some pointed out that the statement doesn't clarify whether Coach believes Hong Kong, Macau and Taiwan are part of China or not.

Over the weekend, Italian fashion brand Versace went through a similar drama over a range of t-shirts and hoodies, which also listed Hong Kong and Macau as separate countries (see the screengrab of one user's Weibo post, below). Versace’s China brand ambassador, the actress Yang Mi, who has around 100 million followers on Weibo, immediately announced that she would end her association with the fashion house, stating that she was "extremely outraged" by the design. The hashtag "Yang Mi ends collaboration with Versace" has attracted nearly 900 million views on Weibo so far.

Versace has apologized twice, on both Weibo and Instagram, to reaffirm that it respects China’s sovereignty and territorial integrity. "All these T-shirts have been recalled from all the official channels of Versace since July 24 and have been destroyed," the apology letter on Weibo said. 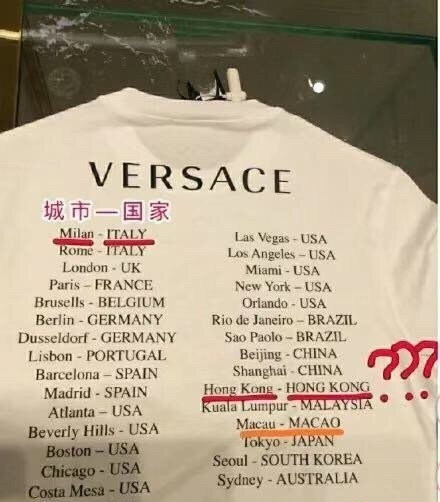 Versace CEO Donatella Versace, whose apology post on Instagram is above, said that the brand accepts accountability and is exploring actions to improve. Similar controversies have taken place several times before. The Estée Lauder makeup brand MAC got into trouble in March after it featured a map of China that didn't feature Taiwan.

The website for the hotel chain Marriott was temporarily blocked in China in January 2018 after it listed Tibet, Hong Kong and Taiwan as separate countries on its website.

While the impact of such boycotts on the brands can be hard to determine, it appears that the Italian fashion brand Dolce & Gabbana is still feeling the fallout after an ad for a fashion show that it released last November was accused of failing to respect Chinese culture. The brand received a lukewarm reception at Milan fashion week in February; and fell 140 places in Campaign and Nielsen's Asia's Top 1000 Brands ranking in 2019.

Relationships between Hong Kong and mainland China remain particularly sensitive at the moment because of the ongoing protests in Hong Kong, where clashes between police and protesters over issues including the now-shelved extradition bill proposed by the Hong Kong government have been ongoing for over two months.

Brands have largely stayed quiet on the protests, but a few, including H&M and Pocari Sweat have unwittingly had their names dragged into the debate.