Unruly's global head of content and PR analyses the stats to uncover which of the US presidential candidates are better received by voters.

We have only two months to go until the end of what has seemed like the longest presidential election in US history. So as we reach the business end of what has been one of the most divisive and controversial elections in living memory, which candidate is winning 2016’s online ad war?

You only need to cast your minds back to President Barack Obama’s 2008 win to see how a smart digital strategy can have a dramatic influence on undecided voters.

Fast forward to 2016, and whose key messages are resonating more strongly with voters? Whose ad strategy is proving to be more effective in these crucial final months before polling day?

To help answer these questions, video ad tech company Unruly today begins a series of articles analysing how each of the candidates’ ads are being received by voters.

This is only the start, as Unruly will be testing more ads in the lead-up to Election Day.

Methodology
Unruly tested a nationally representative sample of 1,091 people over the age of 18 from across the United States about Trump’s "Make America great again" ad and Clinton’s "Fighting for you" video using both biometric and emotional testing tools.

The tests evaluated how well the core messages of the ads were received, what the perception of the two candidates were and whether the ads had any impact on the people who watched them.

What were the most prominent emotions people felt while watching the two ads?

Unsurprisingly, the negative tone of Donald Trump’s "Make America great again" meant that it was far less likely to evoke strong positive emotions than Hillary Clinton’s ad, which had a much more uplifting and inspirational message. However, both videos evoked more intense positive emotions than the average US ad campaign.

Looking at the heat map below, both videos evoked strong feelings of pride (possibly US national pride), happiness (at the thought of the new president making a difference) and inspiration (to vote for the candidate), the Clinton video more so for each emotion.

Clinton also warmed some viewers with her heartfelt message of wanting to help minority groups. Trump’s negative and combative tone meant few viewers felt particularly warm while watching his ad. It also indicates that viewers possibly felt less empathy towards him and his ideals.

Both ads attracted much more intense primal emotions (fear and anger) than the US average, possibly reflecting the polarising nature of both candidates and politics in general. Viewers who disagreed with the policies of Trump or Clinton were angered by their videos.

Political ads are always going to attract more negative emotions than normal ads, with partisan supporters of one candidate likely to respond badly to the other candidate’s policies, and it was certainly the case with these two campaigns.

With his message of fear and an America on the slide, 16% of viewers felt strong feelings of contempt toward Donald Trump’s ad. Hillary’s ad, despite its positive tone and upbeat, inspirational message, attracted even greater levels of contempt.

Hillary’s ad also left people feeling three times more disgusted than the US average, while Trump’s ad was over five times the norm.

Are the candidates’ key messages resonating with viewers?

Viewers were asked whether they agreed with the core messages put forward by the two ads. Here are the results:

When asked about another core message of Trump’s ad, "Politicians are all talk, but Trump will get things done", viewers were more likely to strongly disagree.

In both cases, 18% of people were on the fence, neither agreeing nor disagreeing. Ultimately, viewers were most likely to strongly disagree with the two key messages of Trump’s videos.

This could spell disaster for Trump as it indicates that despite appealing to a core group of supporters, his ads are failing to convince the broader population.

The same was true of Clinton’s second statement, with the majority of respondents either agreeing or strongly agreeing with the statement, "Hillary Clinton will help solve the challenges facing women and girls in America", after watching the campaign ad.

Overall, viewers were much more likely to agree than disagree with Clinton’s key messages than Trump’s.

How effectively did the ads represent the values of the candidates?

Values
Clinton outperformed Trump on all of the brand values tested. She was deemed to be more authentic, innovative, empowering and relatable than Trump.

Favorability
A greater prevalence of intense emotional responses, combined with clearer messaging around the focus areas of her campaign, resulted in a greater shift in positive sentiment towards Clinton than Trump.

Almost half of the people who watched Clinton’s ad had a more favourable opinion of the Democratic nominee afterwards, slightly higher than the US average for ads.

How did specific demos react to the videos? 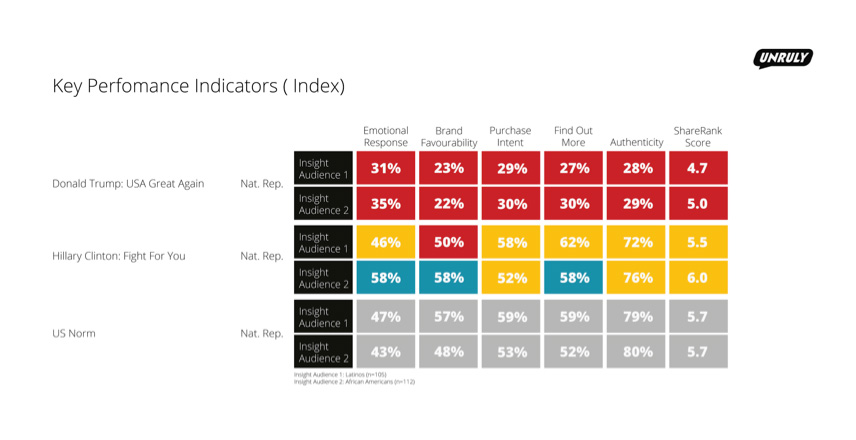 Meanwhile, African Americans responded better to Clinton’ ads than Latinos, with a good emotional response to the ad and a higher percentage wanting to find out more. Hillary’s ad was also deemed to be more shareable (ShareRank).

Women
Many are predicting that the way women vote in November will decide who sits in the Oval Office, with females having turned out in higher numbers than men in every election since 1980, according to US News & World Report.

Trump certainly still has some work to do to win the female vote. A recent Gallup tracking poll shows that Trump has a 70% disapproval rating with female voters, while there has been a long-standing gender gap in US elections, with women more likely to vote for the Democrats.

And based on Unruly’s analysis of these two ads, Trump’s current strategy is doing nothing to reverse that trend.

Of the women tested, 44% felt positive towards the messages in Clinton’s ad, higher than the US average of 34%. Trump, meanwhile, was below the US norm at 31%.

As you can see from the chart below, Hillary ad’s particularly resonated with female viewers. 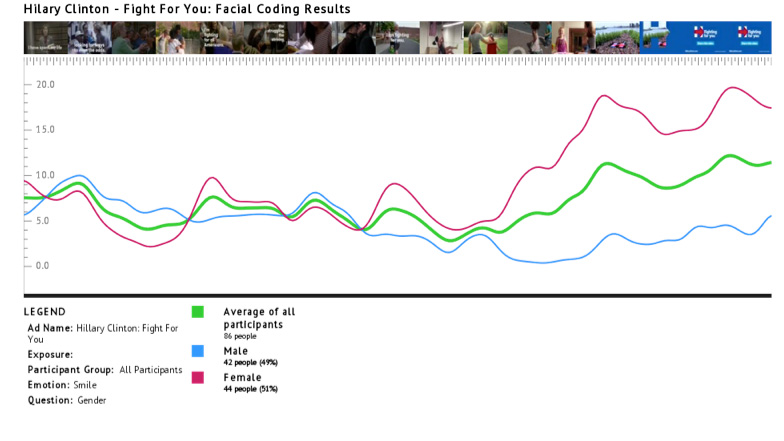 Hillary’s claim that any little girl can be anything she wants, even president of the United States, drove a huge peak in smiles among females, indicating that this statement was a key driver of pride, inspiration and happiness for this group.

Meanwhile, smiles from female viewers were a lot less common throughout Trump’s video. 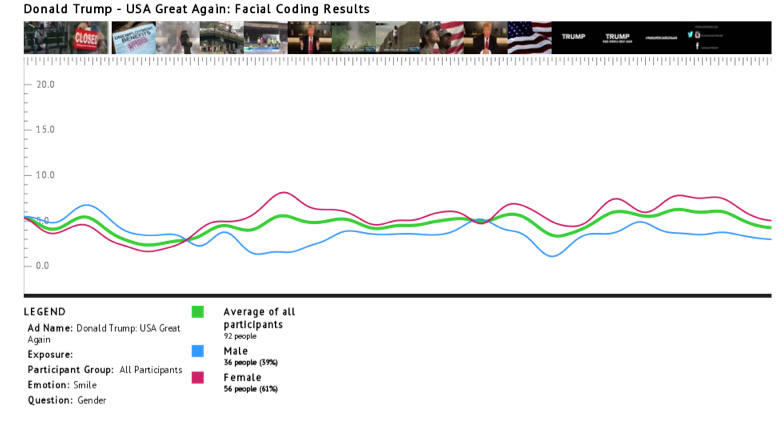 However, they did smile more than male viewers, especially at the part about "our infrastructure falling apart". There are two small peaks, one at the point when Trump says he would "Make America great again" with the American flag as the backdrop.

The other is when "Make America great again" appears in text on the screen. The more positive part of the speech "our country has great potential" did not drive a peak in smiling, possibly because it was lost amid the negative messaging.

Clinton
The first peak of surprise was the sentence when Hillary says she is always "looking for ways to even the odds". Females appeared more surprised when talks about children living up to their potential. Surprise among male viewers peaks at the line, "I’m going to fight until every little girl in America knows…".

Expressions of surprise among male viewers, however, peaked at the images of a bridge collapsing. Females were also more surprised by Trump’s comment that "we need to build a real wall". Surprise increased towards the end, especially among males, as the video switched from the image of the flag to a series of black screens with text.

What did the ads inspire people to do next?

Campaign champions
The positive emotions evoked by Clinton’s campaign and clear campaign messaging also caused more people to want to talk about her campaign or recommend their friends to vote for her.

Conclusion
Obviously, it’s far too early to say which candidate is winning the ad war, but of the two ads Unruly has tested so far it looks like Clinton’s more positive message is resonating more strongly than the negative stance taken by Trump’s campaign.

Even outside of politics emotions play a huge part in advertising. According to a recent Nielsen study, ads with above average EEG scores (emotional ads) deliver a 23% uplift in sales volume versus average ads, while the Field, IPA and Gunn Report, "Selling Creativity Short", stated that awarded campaigns (emotional campaigns) were 10X more efficient than non-awarded campaigns.

Also notable is the small % of respondents (18% and 13%) who neither agree nor disagree with the statements made by both Clinton and Trump, suggesting that people have already made up their minds and feel strongly about their chosen candidate.

It’s also extremely unusual to have so many people "strongly agree" and "strongly disagree" to answers. Usually you’d expect a bell curve distribution but that’s not what we have here.

Havas insights to feature in ITV's US election special