The bank released the campaign shortly after signing on to Mastercard’s “True Name” initiative.

Citi Bank launched a new marketing campaign to raise awareness for the transgender and nonbinary community.

The campaign rolled out just weeks after Citi joined Mastercard’s “True Name” initiative, which allows transgender and nonbinary individuals to use their chosen name on eligible credit cards across the U.S.

Mastercard launched the initiative last year to recognize the hurdles transgender and nonbinary people face in having their true identities recognized in a legal context. Citi announced in late October it was the first major bank to sign on.

Seventy percent of trans and nonbinary people go by different names than those they were given, but those identities often aren’t legally recognized, said Nikki Darden, director of global consumer marketing at Citi. The True Name initiative strikes a balance between respectfully acknowledging and honoring who people are, while maintaining high standards from a security perspective.

Citi created the campaign with feedback from its own trans and nonbinary employees, as well as those at its media partner, Publicis. Many of them highlighted the struggles of finally finding a name that reflects who they are, and not being able to fully share it with the world. 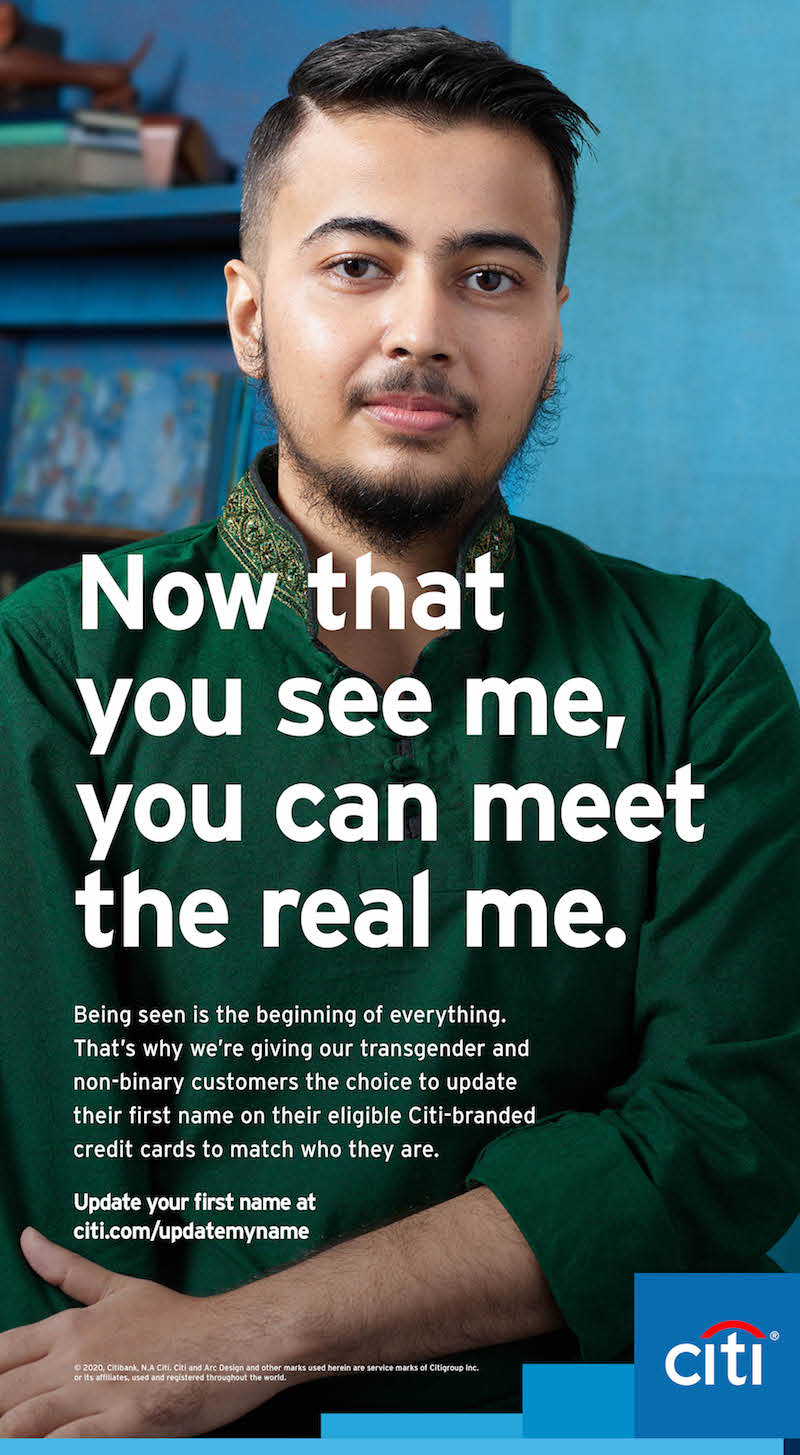 Eighty percent of Americans don’t know or don’t think they know a trans person, according to GLAAD. That insight drove Citi and Publicis to anchor the marketing campaign around visibility. “It’s about making differences normal, putting them front and center, and then people begin to get comfortable with how we’re all different,” Darden said.

Citi not only casted trans and nonbinary people for print and TV ads, but worked with trans and nonbinary photographers to create the campaign. The creative goal was to let the people and their identities shine through, and allow them to express their true selves to pave the way for others to do the same.

The tagline: “Now that you’ve seen me, you can meet the real me.”

It might seem like a given to allow people to use their chosen names on credit cards, but the legal mechanics were not so straightforward. Citi was able to pull it off by allowing customers to add their chosen name to their cards alongside their legal names.

Citi’s commitment to the LGBTQ+ community doesn’t stop there. Internally, the bank encourages employees to identify wherever they are on the gender identity spectrum, from using chosen names on work IDs to including pronouns in email signatures. Citi is broadening those efforts to the BIPOC and disabled communities.

Citi isn’t just thinking outside of the box when it comes to building a more diverse and inclusive workforce, but “reevaluating the box itself,” Darden said.

The work doesn’t end at hiring in a diverse group of candidates, but also ensuring that the interviewers themselves are diverse to bring different perspectives into the process.

The idea, Darden said, is to “rethink from end to end how to build an inclusive culture,” a push the bank is making both internally and externally.