Cindy Gallop, the champion of gender equality in the ad industry, has criticised WPP as part of a speech on the way the industry treats women.

Speaking at The Guardian Changing Media Summit on Thursday, Gallop picked up on the holding group’s gender pay gap report, published last week, and particularly on what it revealed at JWT.

J Walter Thompson UK Group had the biggest median pay gap out of all of WPP's agencies [though only those that employ 250 or more people are covered], which was 45% in favour of men.

Gallop joined this detail with criticism of WPP’s continuing employment of Gustavo Martinez, the former JWT global chief executive who is fighting a sexual harassment and discrimination lawsuit brought by a senior JWT staffer.

The fact that WPP continues to pay Martinez "a large amount of money to hold a public leadership role" [he is currently WPP’s country representative for Spain] despite the unresolved lawsuit, shows "this is not an industry that says we welcome and we respect women".

"It’s the complete opposite," Gallop said.

Her comments had added bite for being delivered just a couple of hours before WPP chief Sir Martin Sorrell took the same stage to be interviewed by journalist Jane Martinson.

Pressed on the WPP pay gap, Sorrell acknowledged that "we all know the reasons behind [it] … [it’s] wrong and has to be fixed". 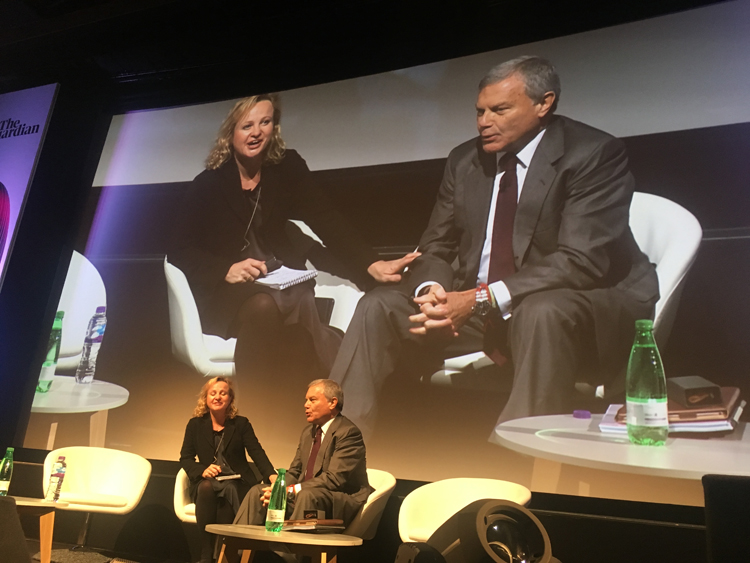 WPP employs a smaller proportion of women in its best-paid quartile than in the other quartiles, where the male-female ratio is roughly equal, according to Sorrell.

"Our top quartile is one-third women. The answer therefore is to promote more women. And this will be achieved by encouraging people through qualitative means, quantitative means, quotas, training programmes and bias training – we're doing all these things," he added.

When asked if he thought sexism was a problem for the industry, Sorrell sidestepped the question by responding that he has always believed women to be more effective than men.

"They have better EQ, organise their time better... women take on more responsibility than men and have more to do than men so they spend less time on watercooler talk," Sorrell said.

"Then why haven't you promoted more?" Martinson interjected.

"I have been promoting more," Sorrell said.

"Not effectively enough then," Martinson argued.

"It's not satisfactory," he acknowledged.

Beyond her criticism of WPP, the whole industry is very much "not satisfactory", Gallop had argued earlier.

She again talked about the response she has had after she reacted to the Harvey Weinstein scandal by inviting from women in advertising to write to her if they had suffered sexual harassment.

"I am shocked, horrified, appalled and disgusted by what I’ve seen in my inbox. I knew it was bad, I never knew it was this bad," Gallop said.

She said the women told her about incidents ranging from inappropriate comments to outright violent rape, and the common refrain was "I left the industry because this happened".

"Our industry harbours many rapists who have never faced their crimes. They are protected by their companies and by the NDAs we sign," Gallop said.

Supporting women and gender equality is not just morally right, she suggested, but is good business.

"Women challenge the status quo because we are never it. We would bring different thinking to how the industry can reinvent itself for the future, but we have never had the opportunity to do so," Gallop said. 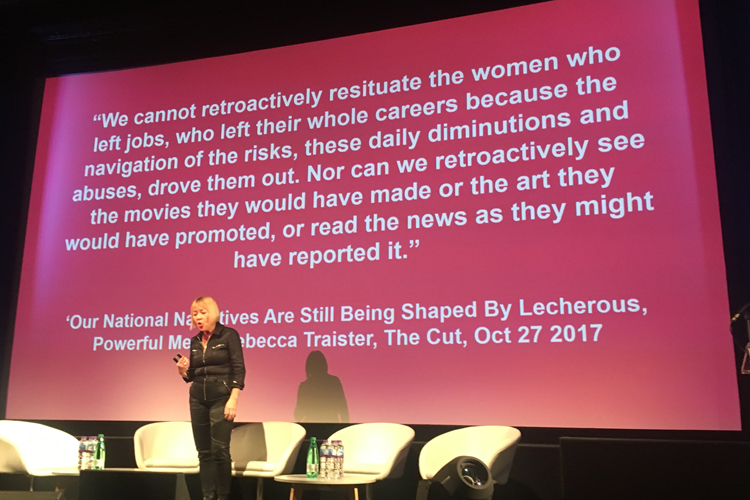 She also believes that in its current shape, the industry is doing a poor job of marketing products to a consumer base whose purchasing power is dominated by women.

"I'm tired of that hoary old term that sex sells. Well, we have not even begun to explore what can be achieved if we used sex through the female lens to sell," the founder of IfWeRanTheWorld and MakeLoveNotPorn said.

"If we were marketing in a world where sex was for everyone and it was healthy and normal, then why are cars – so frequently the resort of people without private spaces – still not designed for having sex?

"Why are mattress manufacturers focusing all their research on sleep? And how about kitchen counters? What's the optimal height for sex? There's a lot of potential to make money that we're ignoring."

Gallop also called for the industry to abandon the shorthand stereotypes that don't reflect humanity or reality anymore.

"We rely so much on the stereotype where the man is the big strong breadwinner and the women is the warm nurturing homemaker. We have to change this. Today both halves of the partnership work. There are not enough aspirational relationships role models represented in popular culture of today’s relationships," Gallop said.

She called for the industry to change rather than talk about change. "Don’t create campaigns or stunts about diversity. Don’t make compelling content about diversity. Be diverse," she said.

Finally, she related how at the Oscars ceremony earlier this week, Best Actress winner Frances McDormand introduced the term "inclusion rider", inviting actors and actresses to make inclusivity a part of their contracts.

"I want everyone to include an inclusion rider. Put that clause in your brains," Gallop said. "You will make an absolute goddamn fucking shit-tonne of money and do a lot of social good if you do all this."

Why creative women should be warriors, not worriers

Don't fake it, we're making it