From ice-skating yetis and animals bouncing on a trampoline to experiencing a winter wonderland, Event rounds up five of this year's best Christmas TV ads that went live.

Department store John Lewis' Christmas ad is one of the most eagerly anticipated ads of the year and 2016 was no exception. The ad, which launched on 10 November, is told through the eyes of a dog called 'Buster the Boxer', who watches in envy while a number of animals bounce on a trampoline in his owners' garden - a surprise Christmas present for the owners' daughter, Bridget. The ad is set to a cover version of the song ‘One Day I’ll Fly Away’, recorded by the British band Vaults.

John Lewis' Oxford Street store offered a virtual reality experience to mirror the ad's creative, staged by agency Pretty Green. It used Oculus Rift technology, aiming to bring the magical world of Buster and his friends to life. There was also a 360-degree film experience available using Google Cardboard in Oxford Street and accessible on JL.com and YouTube.

Pretty Green also created a themed retail space that could be fully merchandised by the John Lewis team and intended to be Buster's garden, where shoppers could see all the animals. Using character renders developed for the advert, the agency devised 3D printed character masks which encased phone-operated VR headsets. This not only created a glimpse into the virtual world but also a photo opportunity in the real one. 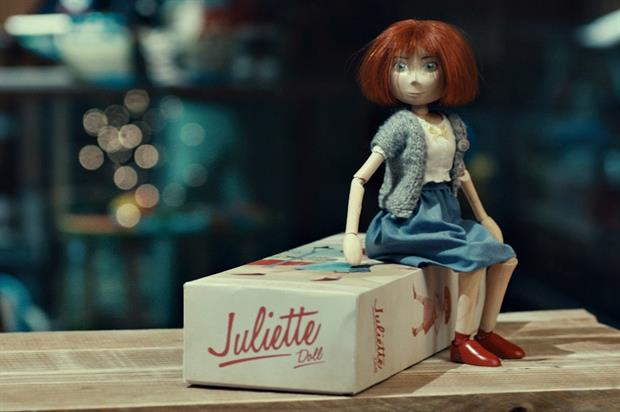 The restaurant chain's Christmas ad, which aired on 21 November, focuses on good times and celebrates the role of McDonald's during Christmas. It showcases a vintage wooden doll - called Juliette - that comes to life after being left on the shelf for another year. To mirror this in the real world, every food tray in McDonald's included an advent calendar, which came to life with games, camera filters and instant win opportunities through the use of augmented reality app Blippar.

To take part, customers downloaded the app, held their phone over the tray mat and watched a new advent calendar door come to life each day. There were thousands of £10 Amazon gift vouchers going up for grabs via the app. Agency Leo Burnett worked on both the ad and the in-store immersive activation.
For McDonald's the tray mat represented its first step into augmented reality and the chance to celebrate the advent calendar - one of Christmas' great traditions. 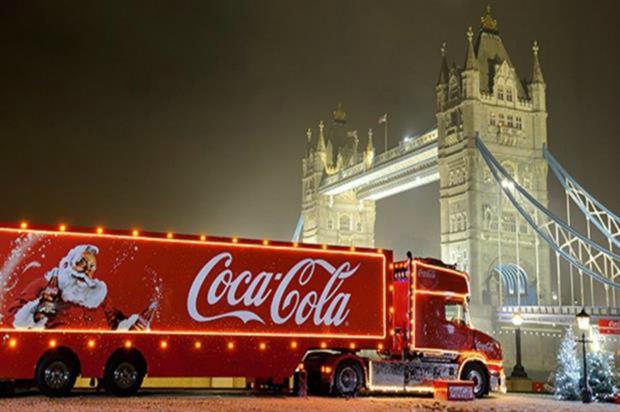 This year, Coca-Cola unveiled its 'A Coke for Christmas ad', celebrating the joy of giving over the festive period. The ad featured a young boy who spreads joy through gifting the refreshing and uplifting taste of Coca-Cola to those who are making Christmas a reality.

The Coca-Cola Christmas truck tour, implemented by agency Playmaker, kicked off on 17 November, with the aim of encouraging visitors to share the festive cheer and explore a special winter wonderland, before enjoying a 150ml can of Coca-Cola Classic, Coca-Cola Zero Sugar or Diet Coke. At sunset, the truck came to life with a special animation powered by the crowd’s seasonal goodwill, celebrating the magic Coca-Cola brings to Christmas.

In addition to the 44 nationwide stops in the run up to Christmas Day, Coca-Cola spread more festive happiness as one lucky consumer had the chance to win a personal visit to their home from the Christmas truck and a Santa sack full of goodies worth £5,000. 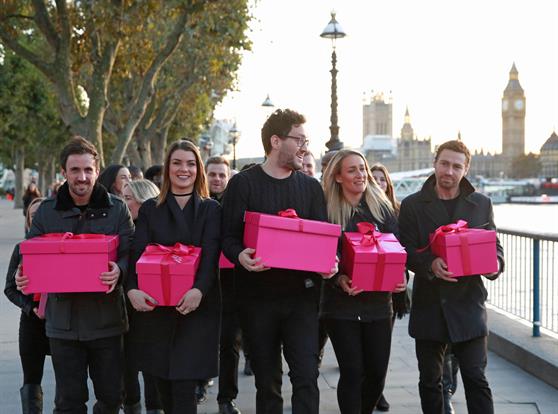 Agency Havas Sports and Entertainment (HSE) Cake worked with online retailer Very.co.uk to brings its Christmas advert to life, which highlighted the emotion and positive feelings associated with Christmas and the feelings people experience when giving presents. The animated advert told the story of a mother who is accompanied on her journey home from work by a flying heart.

Ahead of the ad going live, HSE Cake staged an event on 2 November, which targeted the general public, media, influencers and customers alike. The agency managed a 100-strong army of gift givers who took to the streets of London to delight passers-by with surprise presents, including popular high-tech gadgets, designer perfumes, jewellery and luxury cosmetics. Each box contained two gifts, one for them to keep and one to give to a loved one.

In the evening, the façade of London’s County Hall was transformed into a 60-foot wide projection of the animated advert, complete with a countdown moment initiated by TV presenter and Strictly Come Dancing contestant Laura Whitmore. The Coca-Cola London Eye was also in on the action, turning a pink hue in line with Very’s brand colours to mark the occasion.

Alongside Whitmore, a parade of 100 gift-givers holding over 500 illuminated heart-shaped balloons and glowing gift boxes, joined hundreds of passers-by to line London’s Westminster Bridge and watch the large scale screening. 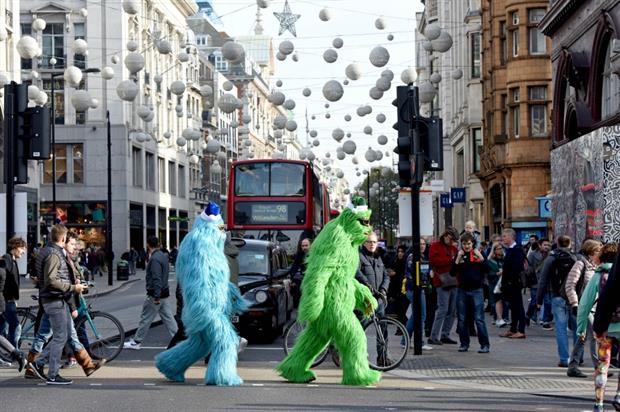 Retailer Argos tasked agency W to send Christmas yetis out onto the streets of the UK to kick-start a festive feeling. Its Christmas ad, which was unveiled on 4 November, featured five neon yetis hurtling through the streets of a snowy town on ice skates, delivering Christmas gifts at extraordinary speed.

These gift-giving yetis appeared for real, adding a splash of colour to central London. Measuring eight feet tall, they became the centre of attention at several locations across the capital, including the festive ice rink at the Natural History Museum, Millennium Bridge, Westminster Bridge and the City of London.

Pro skaters animated the speedy yetis from the inside, including George Southall, who is recognised as one of the best amateur freestyle skaters in the UK and professional ice hockey player, Kevin McGlynn. A team of special effects experts from Animated Extras built the hyper-realistic yetis over a period of three months at Shepperton Studios in Surrey, England.

The retailer also called on people to get into the spirit and snap a picture of themselves with the in-store yetis or wearing a downloadable yeti mask, available from the Argos website. By sharing it on Twitter using #ArgosYelfie, they were in with a chance of receiving a festive surprise.

Should the Coca-Cola truck be parked for good to combat the nation's obesity crisis?