With only ten days to go until the big day, our third instalment of Christmas brand experiences features Chanel, Tequila Patrón and Kabuto Noodles.

Luxury department store Selfridges has devised a festive personal shopping service staffed by its band of ‘Elfridges’. Housed in The Lodge in-store, the workers will aim to take the stress out of customers’ Christmas shopping experiences, helping them pick out gifts as well as organise other services such as gift-wrapping, lunch reservations and shopping deliveries.

The Elfridges London service has also teamed up with automotive brand Mini for the Christmas period. Customers who spend more than £350 will be offered a lift to anywhere within the M25 in a branded yellow car. A spokesperson from the department store said: "Our partnership with Mini is allowing us to go the extra mile, literally, by offering ‘Elfridges’ customers the opportunity to make the transition between our store and home smooth and swift."

Fans of the beauty brand have been able to visit Chanel’s giant advent calendar in Covent Garden Piazza, which will reveal a new gift, event or treat every day until Christmas.

While the full list has been kept under wraps, Chanel initially announced celebrity nail artist Jessica Hoffman would be making an appearance on 3 and 10 December, as well as fashion illustrator Jason Brooks on 12 and 13 December, and handwritten giftcards by the designer’s own calligrapher were being provided on 14, 15 and 21 December.

The outlet is also offering complimentary makeovers, luxury samples and make-up pouches throughout the month, as well as fragrance masterclasses to customers.

While its festive event series has come and gone, we thought it was worth mentioning the Mexican alcoholic drinks brand’s latest collaboration with The Robin Collective. The two companies created A Christmas Carol-themed pop-up in London's Town Hall Hotel in Bethnal Green last week (9-11 December), in three parts, based on the novel’s ghosts of Christmas past, present and future. 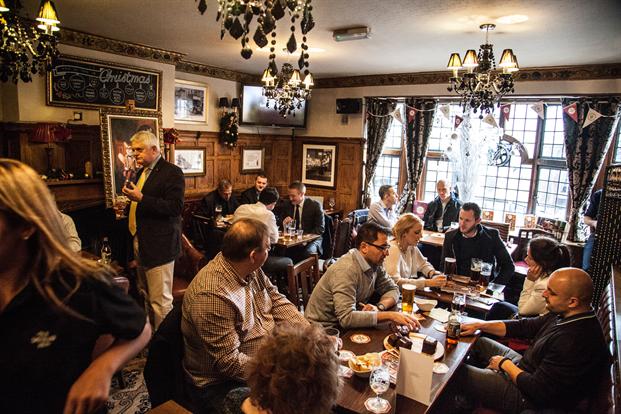 The pop-up, one-day pub from the Green King ale brand aimed to provide patrons with a place to relax before the busy Christmas period. Taking over the Masons Arms pub, near Oxford Street in London, on 3 December, Old Speckled Hen gave guests the chance to order their bar purchases via social media, by using the hashtag #oldspeckledhaven.

Alongside a range of mince pies and cheese and biscuits, the pop-up also provided a number of ‘Ale Elves’ who provided a free gift-wrapping service for guests. Christmas cards were also available to take home and guests were also offered iPads to use to tackle their Christmas shopping lists.

The two brands have teamed up for the Christmas season to provide festive shoppers with a free luxury taxi service to allow people based in London, Leeds and Manchester to get their Christmas shopping done in record time. The service can be booked via Kabuto’s website.

Passengers in the taxis will be provided with a Kabuto Christmas Pack filled with Kabuto Noodles, wrapping paper, ribbons and champagne. They will also be able to eat lunch and sip bubbly on the go whilst being driven to the shops and be advised on their gift choices by an expert Kabuto personal shopper.