Ahead of the first relatively 'normal' Christmas in years, Campaign rounds up the latest festive ads. 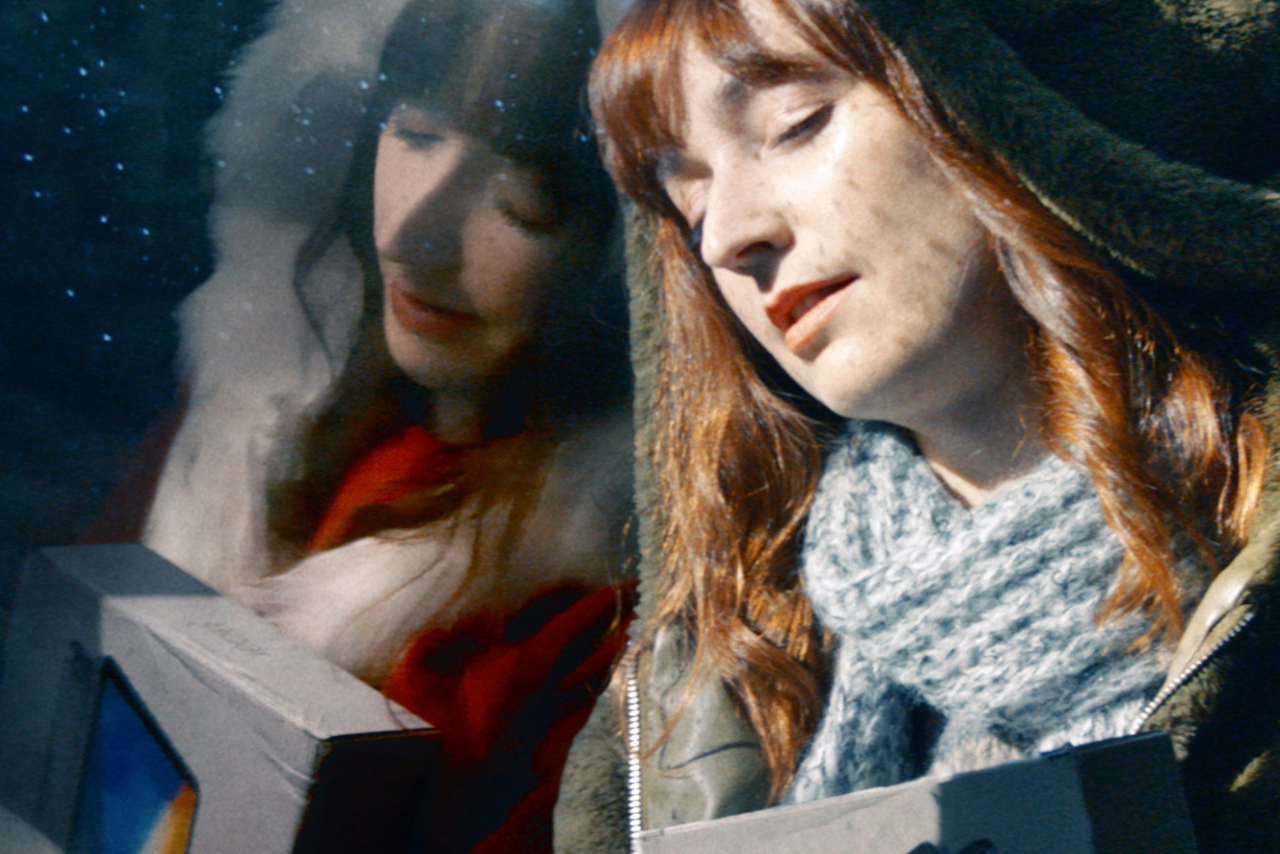 Why did Vodafone opt for purpose over sentiment this Christmas? A Q&A with Maria Koutsoudakis, head of brand at Vodafone UK, who told Campaign why the telecoms titan seized the Christmas moment to ask people to donate their devices to the less fortunate.

It isn't about bananas, carrots or a pink pig, but we do have help from @radioleary and @ItsBigZuu #ItsWhatWeDo pic.twitter.com/wQM9LPQxLD

ITV and the Co-op launched a live Christmas ad on 26 November – a 120-second spot created by Lucky Generals and focused on a community fridge at the Afghanistan and Central Asian Association Community Centre in Feltham.

Dermot O'Leary and Big Zuu featured in the two-minute broadcast filmed live from the fridge.

Coca-Cola is heading back on the festive road with a return of its world-famous Christmas truck tour and a shortened version of the iconic "Holidays Are Coming" ad. This year, the Coke truck is planning to "stop off at as many cities around the UK as possible".

Acknowledging the 50th anniversary of Norway's decriminalisation of homosexuality, the country's national postal service Posten's Christmas ad celebrates queer love, through the tale of an enduring love affair between Santa and a man called Harry.

Very has told everyone to embrace the excuse of Christmas this year.

Created by Grey London, a choir sings a tune excusing people from being blamed for any of their light misdeeds this Christmas. Whether it's putting a toddler in a knitted beard, gifting a family member the worse version of the jumper you bought yourself, or daytime gin-drinking in your pyjamas, anything goes.

The Irish supermarket chain's festive offering is a tear-jerker, telling the tale of a young girl who wakes up to find an injured deer in her garden. For her though, this is no ordinary hoofed ruminant, and she quickly makes it her mission to help her new pal get back on its feet and beyond, on an important mission...

Waitrose & Partners has put the focus firmly on food in its Christmas marketing campaign.

Created by Adam & Eve/DDB, the ad features Extras and After Life star Ashley Jensen in the main role, as she flaunts why “the best bit of Christmas is the food”. The cameo from a well-known chef is the icing on the cake.

Sainsbury's – "A Christmas to savour" by Wieden & Kennedy London

Like many brands, the supermarket titan is celebrating the return of a large family Christmas in a bid to make up for last year.

The ad, by Wieden & Kennedy London, starts with the words "Welcome to Christmas" as the tree lights get plugged in. The scene then freezes and viewers are taken on a flying tour of a hectic household.

The takeaway pizza behemoth's first Christmas ad introduces The Festive One, but also aims to position Domino’s as a crowd-pleaser as friends and family reunite after a tough year.

Tesco offers a Christmas concoction of relatability exaggerated for effect and then sprinkled with some punchy humour – all while showing off its range of festive food.

The ad, by Bartle Bogle Hegarty London, aims to celebrate what it believes is the nation’s spirit of joyful defiance and determination.

The McDonald's Christmas spot captures a girl's lifelong relationship with her imaginary friend, reminding viewers that no-one is ever too old to make-believe.

The 90-second TV ad begins with young Matilda, whose imagination comes to life at Christmas in the form of loveable Iggy, who has blue fur, stripy socks, horns and a tinsel tail.

O2's Christmas campaign is its second to date that focuses on data poverty in the UK. Developed by VCCP London, the ad shows O2’s Bubl mascot transformed into a Bubl army. Once assembled, the Bubl battalion learn that 1.5 million homes in the UK are not connected to the internet.

#JusticeforKevin, #NoKevinNoChristmas, #BringBackKevin are but a few hashtags that have circled the web since Aldi dropped the bombshell that its lovable carrot had been put to bed.

But... Kevin's alive! Those tricksters at Aldi and McCann had us all going after the short trailer, but the carrot is back in a Dickensian-style caper.

Coca-Cola is celebrating the magic of community, with the tale of a young boy who brings his apartment block together at Christmas time by making his own chimney out of the redundant cardboard boxes lying around.

Created by DentsuMB UK, the campaign will run under its "Real magic" global brand platform in more than 90 markets.

Food delivery service Deliveroo has unveiled its Christmas 2021 campaign, by Pablo. The 30-second TV spot celebrates people's love of great food, as you might expect.

Amazon has launched its global Christmas push – a 60-second spot centering on the theme of kindness and the difference it can make to people's lives. The ad was created by Lucky Generals, directed by Trey Edward Schults and produced by Jacob Swan Hyam through Academy Films.

Aldi has finally parted ways with Kevin the Carrot after five chapters to make room for Ebanana Scooge. Only teased so far, with the full ad – by McCann UK – to follow, the short clip sees a young Ebanana patiently waiting for Santa, plated up alongside a mince pie as the log fire roars on Christmas Eve. Keep your eyes peeled.

Smyths Toys – "If I Were A Toy" by McCann Manchester

Debenhams.com has unveiled its first Christmas ad since the online relaunch of the department store earlier this year.

Ultimately serving to remind audiences that this Christmas we do have the chance to see loved ones, the concept and creative for the ad was done in-house, with the ad shot and directed by Yellow Pill.

Fashion and homewares retailer Matalan has launched its Christmas 2021 campaign by McCann Manchester.

Running across TV, VOD and social media, the work sees three people sharing their Christmas celebrations and why they are special to them.

The German discounter's new Christmas ad, by Karmarama, takes a tongue-in-cheek look at how a family might celebrate Christmas dinner decades into the future.

It features laser knives, Lidl space jumpers and a dog with special powers – and it's terrifying (in a Groundhog Day kind of way).

Vodafone – "Give The Gift Of Connection" by Ogilvy

Vodafone celebrates the joy of giving in its purposeful Christmas campaign, which calls on consumers to give to the less fortunate and save them from digital poverty.

According to Ofcom, about 1.5 million UK households do not have internet access. This ad, by Ogilvy is part of Vodafone's "everyone.connected" initiative, launched as a commitment to connect one million people living in digital poverty by 2022.

Argos – "Baubles To Last Year! Christmas Is On" by The&Partnership

Capturing the pure jubilation of Christmas, Argos is depicting all the ways British families across the country "go big" together, after the disappointment of last year.

Created by The & Partnership, the ad is devised to reach out to families that love the festive period.

A family manoeuvre through all their big Christmas season moments on ice skates in Asda's festive spot.

Set to a new imagining of the ice dancing classic the Bolero, the 60-second ad by Havas was choreographed by Dancing on Ice associate creative director and three-time winner Daniel Whiston.

TK Maxx – "Christmas To The Maxx" by Wieden & Kennedy London

TK Maxx has presented an all-singing, all-dancing spectacular, that tells the story of an awkward teenager performing at a Christmas comeback concert in his local town hall.

It is the retailer’s biggest Christmas campaign to date – created for the retailer by Wieden & Kennedy London for the sixth year in a row.

Splitting off from Waitrose, John Lewis & Partners is delivering joy this year, with the tale of an unlikely friendship between a young boy called Nathan and space traveller, Skye.

Created in partnership with Adam & Eve/DDB, this year's offer responds to the customer insight that people want joy this year, after a disappointing festive season in 2020. It also arrives a week earlier than usual, as research shows people are eager for Christmas to begin.

Billed as its biggest campaign in several years, M&S Food has thrust Percy Pig into the spotlight for the first time – teasing him out to its 130,000 TikTok followers first. Animated and voiced by actor Tom Holland, in a scene akin to Night at the Museum, the film sees Percy Pig accidentally brought to life for the first time by Christmas fairy, Dawn French.

The campaign was made with support from creatives from Grey London and production company MPC.

Boots – #BagsOfJoy by The Pharm

Boots launched its Christmas ad campaign “Bags of Joy” today (4 November), with Doctor Who and The Serpent star Jenna Coleman in the titular role of Joy.

Sports Direct – "Go All Out" by Mox

The film, with 60” and 30” iterations, will make its debut during Gogglebox, Taskmaster and The Big Narstie Show. Directed by The Rest duo Alex Motlhabane and Lewis Levi through Pulse Films and with creative by London-based agency Mox, the ad is a high-energy call to action for Britain to get off the sofa.

Barbour – "Paddington, Please Look After This Bear" by Thinking Juice

Barbour has enlisted the help of the much-loved children's character Paddington Bear to instil some Christmas spirit in an animated spot that centres on a story of sustainability.

M&S Clothing & Home – "Anything but Ordinary" by Odd

After a two-year hiatus, M&S Clothing & Home is back spreading Christmas cheer, with a magical, musical advert that showcases its festive range.

Once again created by Odd, the festive filled film brings to life a whimsical music world, where the star of the show dances around iconic Christmas moments.

Bearing the hallmarks of a short by Disney's Pixar, just like its predecessor "Lola", “Stepdad” takes viewers on a journey of ups and downs, heightened by realistic animation and lovable characters.

Created in-house, and centred on the power of storytelling to inspire imagination and the magic created by reading together, “Stepdad” features the return of Lola’s granddaughter, Nicole, and her two children Max and Ella, as new stepdad Mike moves into their family home.

Lego – "Holiday" by The Lego Agency

Lego’s Christmas campaign celebrates the limitless nature of children’s imagination, with scenes of Star Wars stormtroopers running away from insects and a dragon who puts out fires, rather than starting them.

The work, developed by the brand's in-house team The Lego Agency, will run across TV, digital, Spotify, Snapchat, OOH, social and ecommerce. It will also appear at Lego stores, which will offer shoppable sets that inspired children in the film.

ITV ad urges people to listen to loved ones this Christmas

Why Vodafone opted for purpose over sentiment this Christmas

A nation of defiance: Tesco Xmas ad aims to capture the country's mood once again

Lidl predicts what a future Christmas looks like... and it’s scary

'Smashed out the park' or 'free of goosebumps'? Adland reacts to John Lewis Christmas ad