During a visit to Spikes Asia in Singapore, the "Mad Men" star talked about the brands she represents and her distaste for social media

SINGAPORE — Much like her "Mad Men" character, Joan Holloway, Christina Hendricks is classy, intelligent and in full control of her presence both onscreen and online

Despite increasing pressure on stars to build a strong presence on social media, Hendricks has yet to launch a public Twitter account.

"I personally don’t want to watch an actor performing and just so happen to know they love this shade of lip gloss and that they had a breakup," she said following her appearance today at Spikes Asia. "It becomes a distraction. I know a lot of people love it and find it an outlet for them to share, and sometimes in an artistic way or in branding themselves. I just don’t think anyone cares if I ate asparagus for dinner. I like a little bit of mystery in others, and so I try and maintain that a little bit for myself."

Despite staying off social media, Hendricks, who was speaking at Spikes Asia in Singapore as part of Mcgarrybowen's "Icons in Action" speaker series, is nevertheless an expert at steering conversations around herself. She is known to have walked out of interviews that reference her body and now carefully vets both journalists and the topics they plan to ask her before agreeing to speak with them.

"There is a time and a place," said Hendricks in response to a question about this conversation management. "If I’m doing an interview for a fashion mag, I’m quite a girly-girl and I like fashion and I like getting dressed up. But if the reason I’m being interviewed is because of my performance, well, that’s what we should be talking about. Because we work really, really hard, and that’s why we’re getting the attention in the first place."

The actress is just as selective about the brands she agrees to represent. These include Clairol Nice ‘n Easy and Johnnie Walker. "Often, the opportunities come about because I’d spoken of a particular product I liked," she said. "Or the organizations supported the charities I chose. I prefer to work with products that I’m already using, that I really enjoy. This feels organic and honest to me, and I think, therefore, when I talk about it you can hear that it’s genuine."

During her fireside chat on the Spikes stage with Mcgarrybowen co-founder Gordon Bowen, she shared how one brand-ambassador deal came about. "I had said that I think it’s sexy when a man orders a Scotch, and someone approached me and said, ‘Would you like to talk about it and learn about it?’ It was so fun and was so natural that you forget it’s advertising. And that is much the best way, I feel. If you walk around like a robot spouting facts, people don’t like that. You have to be prepared and be so familiar with the product that you can talk about it naturally, so it’s authentic."

It’s this quality of honesty, Hendricks shared during the interview, that explains her "Mad Men" character’s appeal both to men and women – something many brands struggle to achieve.

"I was a bit surprised in the beginning because [Joan’s] so pushy, and she’s difficult," Hendricks said. "I found the positive reactions from women interesting. I believe it’s because there’s an honesty about her; she said what she thought. She often said what everyone else was thinking and didn’t dare." 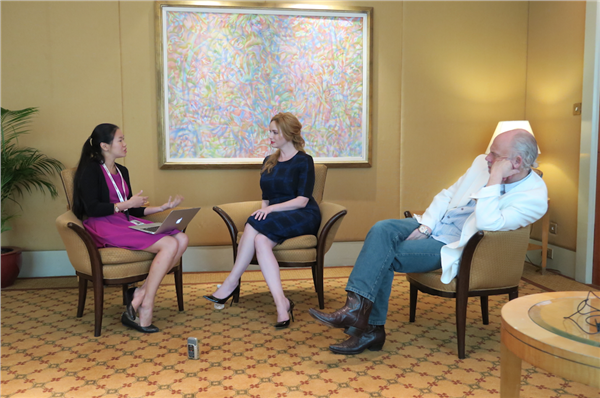 In developing the character of Joan, Hendricks drew on the clues she found in the short pilot. "I looked at the script and she’s walking the new girl around," she said. "She’s got confidence and a familiarity with the environment; she’s very comfortable about it. She even says something about the possibility of finding a husband and the importance of birth control. So, she’s very sassy and confident about her sexuality, and she’s aware of it. Those were the clues I had. I also knew she was the highest-ranking secretary; [there's a] professionalism about her that gains respect."

Miss "Mad Men"? Check out Campaign US' report on life after the Draper Era

During her presentation, Hendricks commented that being part of a show set in the world of advertising has given her an appreciation for a field she had always taken for granted. "I think a lot of people do. What I learned from the show, from the monologues that Matt Weiner wrote for Don Draper and Peggy Olson, is that it’s about emotion. You need to make someone truly feel something. How do you do that? It may not be the catchiest phrase or the glossy car, but there’s a world that you relate to and it touches you."

Tweets from Fashion Week: Making the most of social media

Al Roker's top tip on how to improve your brand: Live streaming