Channel 4's new leadership has taken charge at a good time for the broadcaster, so it kept things short, young and fun at its annual pitch to advertisers.

Moving the upfront to the summer from the autumn is a tacit acknowledgment that this event isn’t chiefly about influencing trading negotiations with media buyers but rather about creating a feelgood factor for the broadcaster.

New chief executive Alex Mahon and her team cut their presentation at the Roundhouse in Chalk Farm to just 45 minutes and dropped any on-stage stunts or interviews with talent.

Then guests were able to visit various experiential areas, based on different Channel 4 shows, before watching music performances from stars including Jess Glynne and James Arthur.

Mahon, a former boss of production company Shine, offered nothing radical in her address but her simple focus on three areas – super-serving young audiences, diversity and digital – resonated with the crowd who stood as there were no seats. 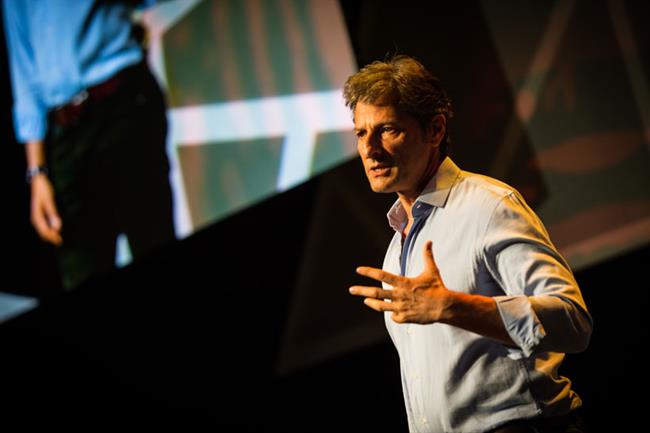 Ian Katz (pictured, above), the new director of programmes, went on to talk about "dialing up the difference" with distinctive, British shows and promoting "fresh faces" such as rap star Big Narstie, who provided links by video during the presentation.

Youth, diversity and sex featured heavily in the new line-up – even by Channel 4’s standards.

Shows include Pure, a dark comedy about a twentysomething woman still living with her parents (a clip showed her struggling to give a speech at their wedding anniversary as her mind was filled with increasingly excruciating sexual images); Bisexual, a drama with a female lead; and Flirty Dancing, a fun-looking show that brings partners together.

"I know there has been a lot of sex in this line-up," Katz said.

The former BBC Newsnight editor wants Channel 4 to be "more connected to what’s happening around the country" and promised more journalism along the lines of the Channel 4 News investigation into Cambridge Analytica and more live broadcasts from the as-yet-undecided new location for the broadcaster’s new, second "national" headquarters outside London.

Other notable pieces include a Brexit referendum drama starring Benedict Cumberbatch and a Matt Berry-led Victorian-era show Year of the Rabbit – although there were no video clips.

It was hard to tell if there are many prospective, stand-out hits but Katz deserves time to put his stamp on the slate.

Asked afterwards for an example of a show that is dialing up the difference, Katz cited Big Narstie’s chat show, which debuted last Friday at 11pm with Ed Sheeran as a guest, in front of an almost wholly black, studio audience. 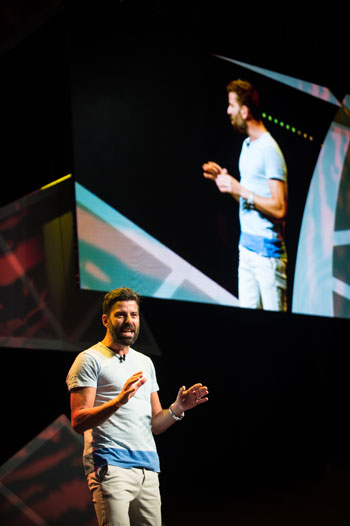 Jonathan Allan, the chief commercial officer, was last on stage after being introduced as "the head of the Channel 4 bank" by Big Narstie.

Allan (pictured, left) began with a brief "floss" dance, before launching into a now-familiar but still-useful schtick about how TV is "fighting back" against "those horrible digital platforms" and a single episode of Great British Bake-Off delivers greater reach than YouTube in a day.

He said a 24 million audience for England’s World Cup victory over Colombia on ITV proves that young people do watch TV – as do strong figures for "pesky" Love Island on ITV2, although Allan noted Bake-Off brings in more "youngs".

He also announced a new "contextual" advertising proposition, which will use artificial intelligence to identify the most important editorial moments in a show for advertisers to target viewers (trials show awareness was up 34%).

Simon Bevan, chief investment officer at Havas Group Media, said: "It was succinct. Broadcasters are challenged by the digital platforms and Channel 4 is taking a position on innovation. I liked what they said about contextual advertising.

"They're trying to do something different and I'm buying into that. ITV and Sky aren't displaying the same digital innovation that Channel 4 brought to the party tonight."

However, Chris Williams, chief executive of Publicis Media Exchange, the trading arm of Publicis Groupe, said the broadcaster needs to add data and automation to broaden its offer.

"The market is moving towards premium, high-quality brand-safe environments and Channel 4 have got that in spades," Williams explained. "They need to add data and automation that allows them to play in two different spaces, the old linear world and the online world [of addressable, targeted TV] – that’s where the gold dust is."

Dino Myers-Lamptey, managing director of Mullen Lowe Mediahub, added: "It's great to see Channel 4 sticking to its roots and putting diversity and certain sub-cultures at its heart but it’s still hard to see how these are going to reach massive broadcast audiences. The proof with contextual advertising will be how well it works."

Channel 4 put on a good show after the presentation.

The experiential areas included a Great British Bake-Off stand, where guests could decorate their own doughnuts and take selfies with contestants from the last series, and a mocked-up Gogglebox living room, complete with TV cameras and some on-screen talent from the show in attendance.

Amusingly, given all the talk about appealing to young viewers, the late arrival of veteran newsreader Jon Snow at the party prompted a surprising degree of excitement among the millennials.

Channel 4 is 'well placed' for now

If the Channel 4 team appeared buoyant, it’s because the state-owned broadcaster is, in the words of Mahon, "well placed" at this moment in time.

There’s certainly an argument that it does not require the scale of creative renewal that was facing David Abraham, her predecessor, in 2010.

The Paralympics has given Channel 4 fresh purpose (it has the rights until at least 2020), privatisation is off the agenda and the new, second "national" headquarters (a decision on the location is expected in the autumn) could be a catalyst for positive change.

Meanwhile, Sky is in takeover limbo, ITV is braced for a shake-up after a strategic review and the BBC lacks mojo in a world of unlimited media choice.

Still, there were hints that the tech giants, particularly ad-free Netflix, which is pushing up prices for the best dramas and talent, cast a shadow.

OT Fagbenle, the star of comedy show Maxxx, who appeared in character in a video clip during Katz’s presentation, said he was pleased to be doing a new show for Channel 4.

"I mean Netflix would be better but Channel 4 is second best and I’ll go with that," he joked, prompting one of the biggest laughs of the night.

In the bright light of day after the upfronts, that is the challenge facing Channel 4 and every other broadcaster: How do you dial up the difference when the global streaming giants have more money, smarter tech and better data?

Gideon Spanier is global head of media at Campaign

Rise of competition, consolidation and collaboration are evidence of a sea change in media

Why Channel 4 moved its upfronts to the summer