Channel 4 and OMD UK built on the success of Humans Series 1 to create a seamless, ultra-realistic product recall activation for the fictional brand at the heart of the show. The work was highly commended in the Best Use of Tech category at Campaign's Marketing New Thinking Awards, held in association with Sky Media.

To launch the second series in 2016, OMD created an immense product recall campaign. It integrated with tech, publishers and platforms to create a seamless and super-real recall activation.

From an AI-powered Facebook Messenger Bot that allowed viewers to interact in real-time with a ‘customer-care advisor’ to a product-recall safety page on eBay, complete with reviews from disgruntled customers, it acted in every way like a real brand.

The storyline focused on "synths" – synthetic humans designed to serve humans. The key concept of the second series was that the synths were now waking up and gaining consciousness.

OMD needed to take this storyline and create an idea that would be clever, provocative and attract just as much interest as the Series 1 campaign.

The campaign idea involved reintroducing consumers to the fictional brand from the show, Persona Synthetics. This time the brand was launching a product-recall campaign to alert customers that their synths may be malfunctioning.

The campaign’s groundbreaking use of AI really pushed the boundaries of digital innovation and captured the public’s attention. It bought the narrative of Series 2 to life, without giving too much away.

The marketing campaign for Humans Series 1 had brought Persona Synthetics into the real world, creating a huge amount of buzz and helping drive 6.1 million viewers to the first episode. It was an almighty launch.

To launch the second series in a highly competitive market, OMD needed to create a campaign that once more delivered significant viewing figures to ensure Humans became an established drama.

Series 1 had launched in the summer, but launching Series 2 in the autumn was a more difficult challenge; it had to contend with the rest of the market launching their key drama portfolio.  Not only did the campaign need to retain viewers, it needed to bring in new audiences while fighting off competitors.

With a modest budget, an idea was needed that would be provocative enough to drive news headlines, spark consumer conversation, and offer Series 1 fans a chance to get involved again.

Landing on an idea that would once again deliver on the Channel 4 remit through the campaign itself, not just through the show was the ultimate ambition. Sparking public debate on contemporary issues and innovation were key objectives in order to deliver this.

The campaign idea involved reintroducing consumers to the fictional brand from the show. This time Persona Synthetics was launching a product recall campaign to alert customers that their synths may be malfunctioning.

It was the perfect campaign idea to bring the narrative of Series 2 to life, without giving it away, and continue the successful narrative from Series 1, picking up where it had left off with fans.

Digital cryptic clues were hidden for super fans throughout the campaign, in the website code and in the messenger bot, providing they asked the right questions.

This concept immediately diverged from the usual media behaviour of a TV-show launch: it needed to behave like a brand doing a product recall campaign by using all the channels they would normally use, which demanded an integrated approach.

First it needed to alert people to the safety message using high-reach announcement media: product-recall announcements were launched across national press, on Channel 4’s TV network and across the Persona Synthetic branded social pages. All these touchpoints directed viewers to the "product-recall hub" Personasynthetics.com. Channel 4 also partnered eBay to create a Product Recall page on that platform, complete with fake reviews from unhappy customers.

Next OMD needed to consider how it would offer customer-service support to customers wanting to recall their products. In a European entertainment first, it programmed an AI-powered Facebook Messenger chat bot to give viewers the chance to interact in real time with a Synthetic Human customer care advisor. 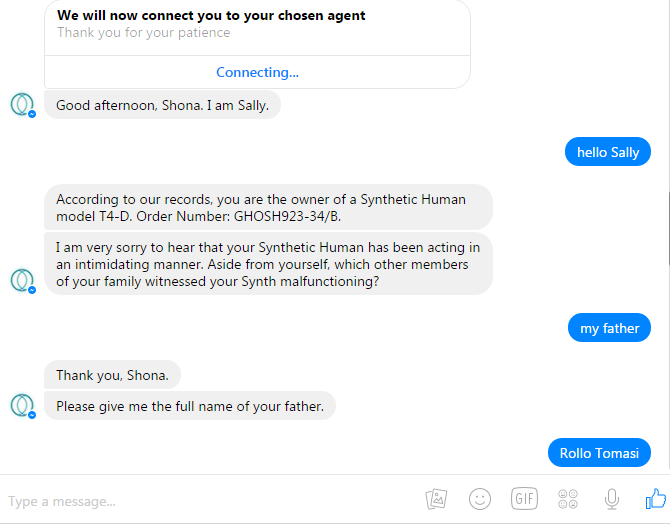 These conversations, which were scripted by the writers at Kudos to make the experience as authentic to the show as possible, became increasingly unnerving as the operative itself began to malfunction. Digital cryptic clues were hidden for super fans throughout the campaign, in the website code and in the messenger bot, providing they asked the right questions.

Video image link ads drove users straight into the Messenger Bot. OMD used the "Send Message" call to action functionality, which was a UK Beta test; this enabled it to deliver a seamless user journey experience. The Bot was also supported with calls to action on the Product Recall website, and even the Channel 4 continuity announcer drove a huge spike of viewers to the Bot following the airing of the first episode of Humans Series 2.

The Facebook Messenger Bot delivered 5.1 million interactions, with a large uplift in tracked ad recall. EBay users exposed to the "Recall" creative were 88% more likely to have heard of Persona Synthetics than unexposed users. Personasynthetics.com had more than 500,000 visits within the first two weeks. Plus, there was a huge volume of earned media – #Humans trended on Twitter on the day of launch and there were more than 46,000 tweets carrying the hashtag in the first 30 days of the campaign.

This culminated in the second series having the highest awareness of any drama since 2008 and being the best-performing original returning drama since 2011 – bringing the audience closer to the world of Humans than ever before.

Deadline extension: you now have until 6 June to enter Campaign's New Thinking Awards