To mark the final episode of The Big Bang Theory, fans can now take an interactive test and graduate with the degree of "Doctor of Sitocomology".

In "The Big Bang Theory interactive quiz!" on E4’s YouTube channel, viewers are tested by a "science professor" with five questions on the US sitcom about a group of socially awkward scientists.

Each question is multiple-choice and once an answer is selected, the player is directed to one of two videos: a "congratulations" along with another question or a disappointed professor asking them to try again.

Ads running across E4’s social media accounts and channel continuity announcements will point viewers to the quiz from Sunday (19 May). The work was created by Rasmus Smith Bech and Jonas Roth at 4Creative, Channel 4’s in-house creative agency, and directed by John Pape.

For those who answer all of the questions correctly, they will receive a personalised certificate from "The University of E4" for "having demonstrated ability by extensive televisual research in The Big Bang Theory". 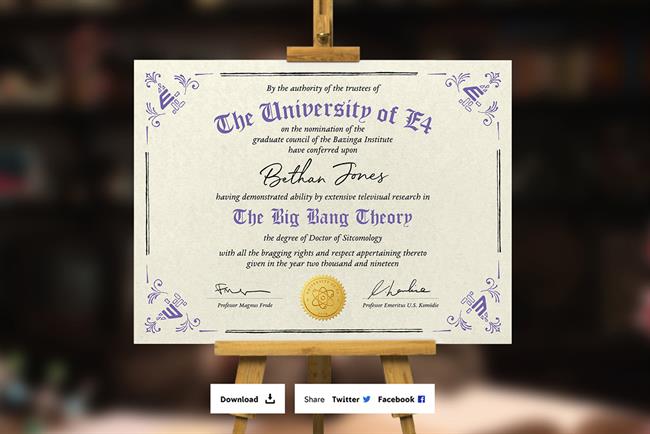 Christos Savvides, 4Creative’s executive producer, digital, said: "The Big Bang Theory has been a huge hit for E4 and there’s a lot of excitement around the final episode.

"Our concept combines the science and nerdy-ness of the show, whilst building anticipation for the finale by driving engagement and rewarding fans with a memento for social kudos."

The activity, which launched yesterday (16 May), is part of a wider campaign for E4 commissioned by Channel 4’s marketing team that also includes TV conceptual activity and ads on Facebook, Instagram, Twitter and Snapchat.

The Big Bang Theory is E4’s most popular show, with series 12 currently averaging 1.9 million viewers. The final episode will air on Thursday 23 May at 8pm.

In search of the marketing theory of everything

Cinematrix to star in BBC's Bang Goes the Theory